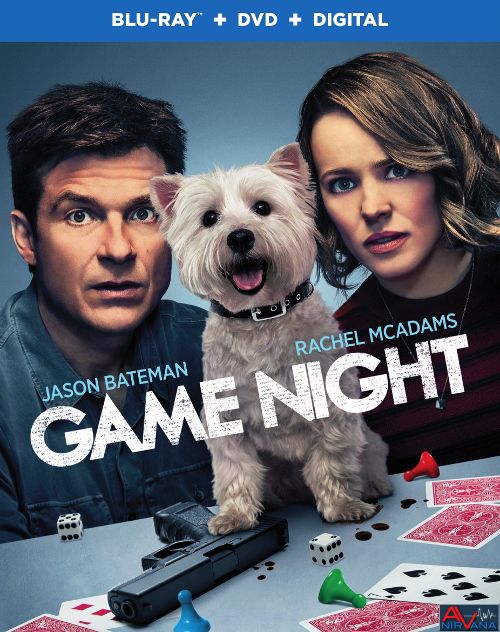 Movie
I’ve rapidly become a huge fan of Jason Bateman over the last decade, and have begun to take him much more seriously than his goofy origins gave him credit for (his feature film debut was as the main character in Teen Wolf Too), and Horrible Bosses is probably the pinnacle of his comedy career (at least in my esteem). Game Night gave me tepid feelings when I watched the preview last summer, so by the time the movie came out in theaters I really wasn’t that enthused to go see it. However, I have a movie buddy that MUST watch every movie that comes into a theater, and while he was having an exceptionally bored weekend, he offered to pay for my ticket. Not one to look a gift horse in the mouth, I agreed and ended up having a blast with the lighthearted comedy. There’s not a whole lot of depth to Game Night, but it takes a good premise, a solid cast, and just has FUN with the concept. No worries, no trying to be something its not, and just goofing around on camera.

Max (Jason Bateman) and Annie (Rachel McAdams) are a married couple with a competitive streak a mile wide. Being rabid game aficionados (group games like board games, not video gamers), the two have garnered a whole friends list of people who love to hang out and have game nights, and everyone is in sync with each other. However, things change when Max’s charismatic brother Brooks (Kyle Chandler) comes to town and stirs things up with a game night of his own. He plans to outshine his younger brother Max (as usual) with a game night the gang is NEVER going to forget. He’s hired an outside agency to come in and stage a kidnapping, complete with faux FBI agents, kidnappers, and all the clues that the gang needs to solve the mystery.

Everything goes off exactly as planned. The kidnappers break in, rough up Chandler a bit, and leave the guests with an exciting night of adventure, right? Wrong. It seems that Chandler is not the upstanding businessman he makes himself out to be, and the kidnappers are REAL. Only thing is, Max, Annie and their friends have NO IDEA that they’re actually tying to really rescue Max’s brother, and that they’re in a lot more danger than they think they are. Wrap in a creepy next door neighbor (the guy that used to come to game night but no one wants to invite anymore), an arms dealer named “The Bulgarian” (Played by Dexter himself), a Faberge egg worth someone’s life, and a bevy of friends with various degrees of dysfunction and you have a hilarious ride that just works.

Game Night works on a rather ingenious premise. A group of friends working on a mystery that is actually more real than they realize. It could have been rather revolutionary, but ends up being a bit more cliched than I was hoping for. HOWEVER, this is not a horrible thing either. The cast elevates the movie way past where it normally should be, and the “mainstream” nature of the film makes it rather comforting and fun to watch. The best way to describe Game Night is that it’s a cotton candy movie. It’s not healthy, it’s not overly filling and dense, but it’s sweet and enjoyable with just the right amount of checking your brain at the door.

Bateman and McAdams work so well together as the ridiculously competitive couple. They both are sweet and endearing, but so woefully in over their heads during the film that you can’t help but love them. The rest of the cast is rather cliched, but also brings enough fun to the table to garner laughs. Jesse Plemons as the creepy cop neighbor that no one wants to hangout with is just spot on. He has that kind of William Shatneresque voice, mixed with just the right amount of odd to be both creepy and hilarious at the same time. Billy Magnussen as the dumb friend that everyone pities is one of the highlights, and the film even employs a couple of small cameos (Danny Huston, Michael C. Hall and Jeffrey Wright) that really steal the scenes they’re in as well. While the movie is not 100% perfect, the infectious cast and solid writing make it a highly enjoyable fluff comedy that I enjoyed watching both in theaters as well as on home video.

Rated R for language, sexual references and some violence

Game Night was captured with a mixture of Arri Alexa cameras at 2.8K, and Red Epic (sourced at 8K), and then finished at 2K for the digital master, so the movie definitely has a good pedigree behind the filming style. The movie’s colors and detail levels match the high quality cameras used, rendering a glossy and pretty looking film that is incredibly detailed for a Blu-ray. Colors are bright and well saturated, with blood packs bursting on chests, shiny red cars glinting in the night time street lamps, and detail that picks up every curve and fiber on a person’s body. Watch the scene where Gary gets shot, as you can see the gel cap he spits out curled up and crush on his chest, as well as the acne he has going on from and some razor burn on his face. Clothing is intimately detailed, and even the small CGI usage at the end is more than adequate for the disc. Blacks are deep and inky, with some very mild crush, and no major artifacting that I could see. This a great looking encode from Warner, and a worthy addition to my home theater.

This isn’t a film that really calls for a high end audio track, but Game Night’s 5.1 DTS-HD MA lossless track is more than adequate at filling out all the speakers with ease. The dialog centric films is given an even mix, with a good portion of the heavy lifting all in the front of the sound system. Despite the fact that this is a comedy and dialog heavy, there is a goodly amount of surround activity once the crew sets out to go “find” Brooks after his “kidnapping”. Gunshots ring with authority, a car/plane chase near the end really rips it up with some hefty LFE, and a screeching car chase between the thugs and our two main characters gives an intense feeling to an otherwise mild mannered film. Channel separation is crisp and cleanly noted, while the dynamic range is given ample room to flex and swell when necessary. This is exactly what you would expect from an “active” comedy. Lots of dialog and quiet moments, but the film is also quite capable of throwing the gloves in the ring and getting excitable when necessary.

Game Night isn’t going to be hailed as the single greatest comedy of all time, and it isn’t going to match the pure awesome that was Horrible Bosses (Jason Bateman’s best comedic outing yet), but it is a very light and fluffy comedy that garners more laughs than I initially expected. The humor is witty and charming, and the actors have fun with the concept of a game night gone wrong. Bateman dominates the screen as he usually does, but the adorable Rachel McAdams acts as a fantastic compatriot to his sardonic wit. The Blu-ray from Warner Brothers is well done in all aspects (except for a noticeable lack of extras) and I give it a solid thumbs up as a mindless comedy that requires very little effort to enjoy. Recommended as a fun watch.

Thanks for the review. Will catch it once it is on netflix, amazon prime.

I’ll be renting this based upon your review. I love both Bateman and McAdams in most I’ve seen.

I wouldn't go in expecting something gloriously hilarious, but it's a fun little romp that really is a treat as long as you check your brain at the door and expect a popcorn comedy (IMO of course)

I’m good with that.

Here I come Redbox! Look forward to this one...

I will rent this one. Thanks for the review.

I finally saw it and thought it was hilarious. The crazy neighbor was really funny with his dry and strange humor. Great chemistry too between Bateman and McAdams.

lol, glad you liked it. I liked it a LOT more than I thought I would from the initial trailer. And you're right, Gary the cop neighbor was the highlight of the movie

Michael Scott said:
lol, glad you liked it. I liked it a LOT more than I thought I would from the initial trailer. And you're right, Gary the cop neighbor was the highlight of the movie
Click to expand...