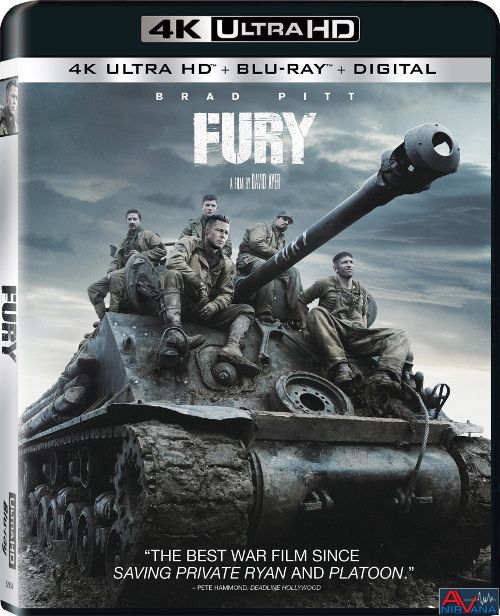 Movie
David Ayer making a war film is a bit of an interesting concept. Ayer is also a mixed back himself, having made/written some great movies, and some really buggers as well (he did write the abysmal Suicide Squad you know). He’s got a raw, gritty nature to his films that do well with dirty cops and blatantly twisted films where good guys and bad guys blur the lines of distinction. I loved Sabotage with Arnold (even though it got hammered by critics), Street Kings was amazing, and End of Watch was a distinctly unique movie all with one commonality. They were dark, gritty cop movies. While war time films are not usually pretty and bloodless, there is a sense of patriotism and order to them that doesn’t seem to jive with the corrupt cop mentality that Ayer is famous for. So color me interested in 2014 when I see a World War II movie coming out directed by Ayer. While I wasn’t expecting a horrible movie from Ayer, I was really surprised at just HOW good the film actually was, and how DARK it was going to be. Fury is what happens when you mix in the brutality and violence of Saving Private Ryan and Hacksaw Ridge, and mix in some of the anti-war sentiment of All Quiet on the Western Front and rough it up a bit like so many of Ayer’s movies are famous for.

Right after the patriotic film Lone Survivor came out (A movie I loved to death), Fury came out onto the scene, pushing the war narrative in a DIFFERENT direction. The movie revolves around a tank group at the tail end of the European push during World War II, and the mission they undergo behind enemy lines. Instead of creating bonafide heroes, Ayer does what he does best by creating blurred lines where heroes are nothing but men doing what they have to do in the living hell that is war. Men do horrible things in war, and so many war movies portray their battles are glorious and honorable, and while I have nothing against these movies and FULLY support our men in the field, I also know that what you undergo in battle is NOTHING like most movies. You have to make split second decisions that may sear your conscience, or see things that truly shake you to the core of your being. And as time goes on in the trenches of combat, you become desensitized to the horrors of war and just slog through the proverbial mud waiting for the hell to end. THIS is what Ayer does so magnificently here. He uses violence and blood as a paintbrush to portray war for what it is. A job that needs to be done, and cross to bear until you get to go home (where for many, it doesn’t end).

The story is really more of a setup for the horrors of war, but a Sherman tank crew has just lost a critical member in a battle, and their replacement is about as green behind the ears as you could possibly be. A typist by trade, Norman Ellison (Logan Lerman, as baby faced as ever) has never had any REAL combat experience and he is being thrown in with a hardened tank crew that has seen more blood than he could possibly imagine. The tank crew, headed by one Don Collier (Brad Pitt), isn’t exactly welcoming to the young recruit, as they fear that him being so green and inexperienced will cost them their lives in combat. Pushing forward against the failing Nazi forces, Norman is integrated into the team, learning things that will shape his life forever, and melting into a bond that is created only through the fire and blood of wartime.

There’s nothing NEW about Fury. It really focuses on the classic “young recruit” trope that is pretty common through all of wartime films. A new member comes into the already established ranks, and he has to learn the life lessons that will create a battle hardened soldier. It’s really the WAY that Ayer goes about showing the transformation that is key. The entire tank group are battle hardened already, and have a jaded sense of brutality to them after all the pain and suffering they’ve gone through. Watching even the supposed “heroes” fall victim to being just as brutal as the imagined enemy sets Norman apart from the crew. But this isn’t seen as heroism. It’s seen as incompetence and liability, with Don himself telling young Norman that you are here to do a job, not feel your moral qualms. Kill Krauts, or be killed by Krauts.

The tank itself almost plays a character in the film, as it is the home base for the men. It is a giant machine of war, and to the men it really is like a mother, a nurturing base that protects them from flying bullets and Nazi soldiers as they push them back. It’s interesting to watch each of the soldiers let down their guard once in the steel beast, and the camaraderie that ensues is instrumental in creating a tight night and cohesive fighting unit. Ayer’s film doesn’t always have a thrilling plot to keep you interested, but instead focuses more on the horrors of war, and how men bond on the battlefield to such and extent. Painting this tail with blood, grime, and suffering, he does so in a way that is both fascinating and horrifying at the same time.

Rated R for strong sequences of war violence, some grisly images, and language throughout

Fury was introduced back in a time period where Sony was really pushing their “Mastered in 4K” series of Blu-rays (meaning the master was in 4K, but then downscaled to 1080p, much like how the “Mastered in HD” films were touted back in the DVD era), and was a solid looking film back then. Actually, it SHOULD have been considered one of the great looking films of 2014, but had some noticeable black crush that was somehow a problem for several Sony Blu-rays (only the Blu-rays) in that time period (I still remember comparing the difference in the German vs. U.S. version of The Interview and see how shockingly different the black levels were). Luckily the new 4K UHD has been given a new 4K master, according to the press release, and the difference between the Blu-ray and the 4K UHD disc is rather impressive. It’s like a fine layer of gauze has been lifted off the screen, as everything is sharper, cleaner, and clearer than ever before. Fine details are resplendent with the audience able to see the blood, sweat and tears of the tankmen on their grimy faces. Also the use of HDR allows for the gray and blue color style to balance more evenly with the contrast and black levels (which are hugely improved) to a greater extent. The film itself doesn’t lend itself to stunningly bright colors, but that added contrast and black levels make it a much more intricate looking film so that the blues and grays really do stand out more. There’s some mild banding (although very minimal), but otherwise this is an artifact free film that really does look amazing.

Oh boy. I LOVE the last few weeks. For some reason the different studios (mostly Paramount and Sony ) have released a TON of films over the last few weeks that have been given brand new object based audio mixes, ranging from Gladiator, Braveheart, The Patriot and now Fury as well. Each and every one of those discs have been given reference quality tracks for sure, and I have been like a kid in a candy shop, dancing around from disc to disc babbling about how great they are. So, to keep with that newfound tradition, I’m going to babble just a little bit more and rave about the 5/5 reference level track that Fury has been given. While I can’t say that the track is night and day different over the 5.1 DTS-HD MA track for the Blu-ray as it was considered reference a few years back, but it IS a more powerful and robust experience thanks to the addition of several back channels and the use of discrete overheads as well. This track is simply PUNISHING, with deep waves of LFE pounding the listener back in the seat, and an intense use of surrounds that puts the listener right into the heart of the action, and to make things even MORE encompassing, you get to hear bombs, bullets and overhead planes screaming by thanks to the copious use of the overheads.

Fury was an entertaining movie that really feels like it blended elements of Saving Private Ryan and Kelly’s Heroes and turned it into a disturbing and bleak war experience. I won’t go so far to say that it is a modern classic, but it was a well done movie that came out of nowhere (especially since back in 2014 the Shia LaBeouf hate was at peak maximum, with most people thinking the off kilter actor could deliver anything serious again) and earned its accolades in spades that year. Sony has gone back and given it a FANTASTIC remaster for the 4K UHD disc, as well as a nice boost to the already stellar 5.1 DTS-HD MA track with Atmos. Extras are ported across from the Blu-ray, but this is a technically great disc and makes a good upgrade for fans of the film. Definitely a great watch.

Sheesh, you’re going to have to stop with these reviews Mike! This is going to be a costly weekend. I loved Fury so I’ll be adding this one as well.

I warned you guys a few weeks back, this was going to be a brutal month on the wallet for 4K titles.

Not so brutal after all but Fury and The Matrix will be in the fold this weekend.