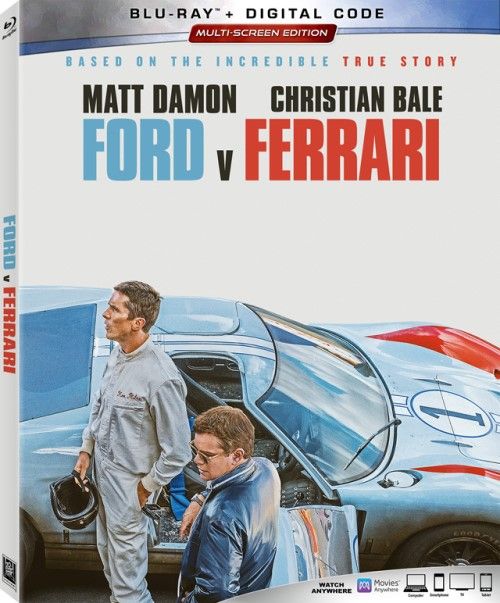 Movie
Ferrari is kind of a legend in the car world. They make some of the sleekest, sexiest, fastest, and most desired (and pricey) cars in the world. Their world racing record has been incredible, and while I love me some American muscle, Ford is not a company that you think of as beating the legendary Italian car company at a race. However, the American car company actually beat Ferrari at the Le Mans international race from 1960 to 1965 using the Shelby/Ford GT40, developed by none other than Carroll Shelby himself. It was a huge amount of pride for America that they were able to beat the Italian stallions not just once, but for half a decade in the 60s. I vaguely remember my father talking about this when I was a kid, so I naturally was rather curious when I saw the trailer for this a few months back. For some reason I actually forgot the movie existed until I saw the home video press release, and interest was once again renewed. The trailer looked promising, but not overly so, meaning I went in with mild expectations. Expectations that were totally blown away as I ended up being riveted from beginning to end with a great dramatic race film that left a huge happy smile all over my face, and really wishing I had seen this in theaters.

The story about the infamous rivalry has been mulled over in Hollywood for quite some time according toe the interviews on the disc, and had been turned over and over until the film could be made to appeal to everyone instead of just professional race car enthusiasts. Ford v Ferrari opens up with the infamous Carroll Shelby (Matt Damon), maker of the Shelby Mustang GT, having to give up professional racing due to his health problems. Years later he’s designing cars for a living, and utilizing his friend/colleague Ken Miles (Christian Bale) as his lead driver. Ken is known for being a straight shooter, but a real difficult person to deal with, as only Shelby can reign the guy in. Still, he’s an incredible driver, and it’s that feature that makes him a shoe in for a never before heard proposition.

Henry Ford II (Tracy Letts) is watching the Ford name sink into bankruptcy as every other American car manufacturer in the nation is starting to outpace his legendary company. However, when marketing director Lee Iacocca (Jon Bernthal) suggest that Ford gain better brand recognition by creating a race car, there was only one man to go to in order to fast track that design, Carroll Shelby. As much as this is an impossible venture, Shelby, Miles, and his crew design a car that will go fast enough to defeat the infamous Ferrari in the French race of Le Mans, and put Miles in the drivers seat to bring Ford to victory.

Ford v Ferrari is a fantastic film. I can’t believe that the trailer didn’t overly excite me, yet somehow the film riveted me to the seat for over 2.5 hours and barely notice the time going by. The film smartly steers away from being JUST a race movie (although there are more than enough high octane racing scenes to satiate people), but instead crafts a character drama that transcends the trappings of action and racing adventure. While I would have liked to have seen some of the back story of Shelby himself (the film glosses over the fact that he actually beat Ferrari in Le Mans years prior driving an Aston Martin), the characters are the best part of the movie, and the actors playing them knocked the roles out of the park. Matt Damon shines as Carroll Shelby, giving his usual impressive performance, but Christian Bale is unbelievable. The man is known for totally absorbing himself into the roles he plays, doing some crazy things to try and BECOME the character, but he knocked the rough and group role of Ken Miles out of the park. I didn’t ONCE see Christian Bale. His laugh, his gestures, his facial expressions all screamed someone completely different. Not to be outdone, Caitriona Balfe is probably my favorite character of the entire movie as Mrs. Miles. Her dynamic with Bale was so incredibly rich, and the chemistry they shared was so comfortable and fluid that she stole ever scene that they were in together (the fist fight scene was a definite highlight in that respect). Josh Lucas playing a slimy Ford executive does exactly what Lucas does best. Play a scumbag who you adore to loathe the entire film.

Rated PG-13 for some language and peril

Shot on Arri Alexa cameras according to the end credits, and finished at a 2K digital intermediate, Ford v Ferrari looks amazing in 1080p. The detail levels are astounding, as is the filmic nature of the shoot. If I wasn’t so sure it was digital cameras I might actually mistake it for a 35mm production with very small grain structure. The film’s color grading is mostly neutral, but splashes of honey and amber give it a slightly weathered look, and some of the night shots have a distinctly milky look to them even though they don’t detract from the excellent black levels. The colors are vivid and bright, with splashes of deep reds and brilliant blues and pale off shades of the automobiles themselves. The film shows no signs of banding, no signs of black crush, and the amount of nuanced details on the characters and the cars themselves is nothing short of astounding. Picture perfect.

Even though Fox once again leaves the Dolby Atmos track for the 4K UHD disc, this is about as perfect a mix as you can get for a DTS-HD MA track. It’s bombastic, aggressive, and fully powered in the race scenes. The opening shot of Shelby on the track is filled with roaring engines, sharp shifts of the gear levers, and the pummeling sound of the low end as the car careens around the track. The film has plenty of racing scenes to really stretch the limitations of the 7.1 mix, as the bombastic nature of a dozens of cars careening down a track is incredibly immersive. Voices, however, are still well within check, and anchored up front. Christian Bale’s limey accent is a bit thick at times and needs the person to strain to make out what he’s saying, but that’s not fault of the mix, but rather a dialect issue. The quieter moments in the film are no less nuanced and appealing either, as there are little background noises, such as mechanics yelling in the background, or the clanging of tools as they work, and rounds this mix out to pure perfection of the format.

• "The 24 Hour Le Mans: Recreating the Course" Featurette – Discover how the climactic race of the film was achieved, from recreating the track to capturing and editing all the action.
• Pre-Vis: Daytona & Le Mans Races – These animated pre-visualization sequences worked as a roadmap for filmmakers throughout
• "Bringing The Rivalry to Life" * – Go behind the scenes of the film with this 8-part, 60-minute documentary.
• Matt and Christian: The Conversation (iTunes Extras exclusive) – Sit down with Christian Bale and Matt Damon for an intimate reflection on the making of the film.

As I mentioned in the last paragraph, the film is not without it’s excitement either. This is not some dry drama, as a good chunk of the film is spent on the various races Miles undergoes to gain access to Le Mans, and the end race is a good 30+ minutes alone. Those scenes put that huge smile all over my face, as the surge and adrenaline of high speed cars is so well done and so intense that I really wish the movie could have been adjusted to 3 hours instead of 2.5. All in all, I have to give credit where credit is due and admit that I was surprised by Ford v Ferrari. It blends just the right amount of thrilling car races with a rich character drama that it appeals to people of many tastes. The acting is out of this world and it has fast become one of my favorite movies of the year (so far). 20th Century Fox’s Blu-ray disc is absolutely stunning, with perfect audio and perfect video. The only thing (both) releases have as a weakness is the mediocre extras. Definitely a great watch, and a great buy in my opinion.

Thanks for the review. I will have to get this one.