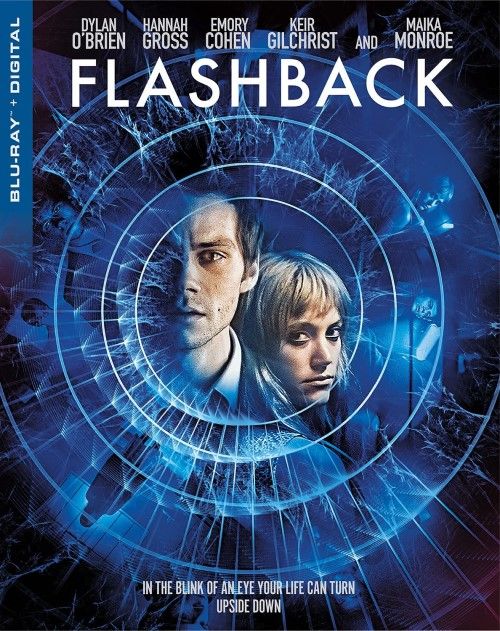 Movie
It’s hard to watch Flashback without having ...hehe… “flashbacks” to Donnie Darko. It’s got a young man suffering what seems to be a psychological break down. Both show troubled young men with hallucinations, time jumps, and seeming interaction with a mysterious guiding character (although no rabbit in this film), and the film’s interactions hint heavily that the stories emphasis on “time” is nothing but an illusionary construct. However, as much as I love puzzle films like this, I’m not sure that Flashback will ever receive the cult status that Donnie Darko does, but then again, what do I know? Donnie Darko wasn’t really considered a hit when IT first came out, instead garnering it’s cult status years later. So for all I know a few years from now they’ll be teaching this flick in film school.

Second time director Christopher MacBride (his first directorial job since 2012’s The Conspiracy) has an incredibly dense and chew film in front of us. At first my thoughts were that this was going to be a gigantic arthouse mess, with huge philosophical questions that never get answered (just for the sake of asking the question), and end abruptly with the audience wondering if they were watching an actual FILM, or whether it was just a visual experiment. The film splices between several timelines at a moment’s notice, with our main hero Fred (Dylan O’Brien) dealing with some psychological issues. He’s got a lovely girlfriend, a lovely job (albeit slightly boring as a data analyst), but he’s having flashbacks to high school when he, a kid named Sebastian, Andre and an outcast girl named Cindy (Maika) were doing a designer drug called Mercury. He remembers very little of their drug induced partying, but is having memories Cindy literally vanishing the day after their last drug fueled binge.

Worrying that something might have happened to her back then and they just don’t remember, Andre, Fred and Sebastian start tracking down what happened that night in order to see what happened to Cindy. The story flits from “adult” Fred and his wandering mind to memories of that fateful night back in highschool, but the more and more that Fred goes down the rabbit hole, the more he realizes that they may not be memories at all. And what he considers time passing is nothing but an illusion meant to entrap him.

In the commentary (which is actually rather juicy), Director Christopher MacBride jokingly says that Flashback is a story about a boy and his mother, and the way that theme plays out in the story is rather fascinating. The sophomore director very carefully lays down a myriad of different threads throughout the movie that hinge upon the idea that time is nothing but a perceptive construct. A construct that is keeping our true forms of perception entrapped by a mysterious being (at least according to one conversation with Cindy) to control our every outcome. The drug that they end up taking supposedly pulls back the veil between what we perceive time as, and what reality ACTUALLY is, a fascinating concept.

Again, I’m not sure that Flashback is really going to ever garner Donnie Darko status, even after watching it 3 times to try and pick up every clue and tidbit I could. MacBride has some really weighty concepts going on with time and the sci-fi aspect of the story in the second half is mesmerizing to watch. But at the end of the day MacBride stumbles with how he pulls all the strings together. The whole theory of some “alien” personality controlling our reality is completely ditched, and the coming of age story about Fred learning who to follow and who to leave behind ends up feeling rushed in the 3rd act. The first half of the film is VERY confusing to watch, but the over exposition inside the drug house with Cindy pulls a lot of things together, but also feels just a bit trite in how it unfolds. I’m not sure how to say it, as I really enjoyed a LOT of Flashback, but its as if MacBride struggled to really bring all his various threads together, despite doing a rather impressive job for a majority of them.

According to the commentary, the film’s progress was severely hampered by the Covid-19 pandemic, forcing him to use some digital shortcuts and not being able to use everything he wanted. As such I’m not able to find much data on what cameras were used or the resolution of the master, but the 2.39:1 framed Blu-ray is rather solid with a few dark scene flaws. There are moments of sharp outdoor glossiness with bright colors and razor sharp clarity, but most of the film is blasted with a muted blue/gray tinge to it and bathed in veritable darkness. Colors are solid enough in daylight scenes, but the muted tone of the rest of the film just doesn’t lend itself towards magnificent detail levels and deep color saturation. The blacks are really the only problematic element of the film due to the hazy and surrealistic visuals that are employed, lending itself towards excessive banding and crush in the really dark shots (such as the trap house, or the club). Characters show generally great detail levels, but the dark shots smear more than once, leaving us a bit unsatisfied when the movie gets REALLY dark. Otherwise it’s a stylistic film that ticks off most of the satisfactory check boxes with ease.

Just like the visuals, the sound design for the film plays just as important a part as the storytelling itself, and MacBride does wonders with the 5.1 DTS-HD MA mix. It’s a pulse pounding track that ripples with electronic musical energy, complete with deep bass hits and an oppressive use of surround channels that really crushes the listener in a vice. Voices are almost always perfectly intelligible at all times, though some of the more surrealistic moments have the background noises overwhelming the front channel in a rather obviously purposeful way. Bass is tight and powerful and as I said, the surrounds are use so much that the act as walls closing in around the listener. Great mix.

Flashback is a fascinating (if not sometimes frustrating) story that deals with some weighty subjects in an interesting way. It’s confusing, it’s a coming of age story, it’s a tale of drug infused mania (you’re still never sure whether it’s all in his head while the drug turns him into a pitiful addict), or a sci-fi tale of time jumps extraordinaire. MacBride does struggle with a few points, but the film is still very much worth watching if you like a mind bender that really does try to tell a story and not just be an arthouse flick. The Blu-ray is solid enough with good video, great audio but a rather meager (although interesting) set of extras to enjoy. Interesting Watch