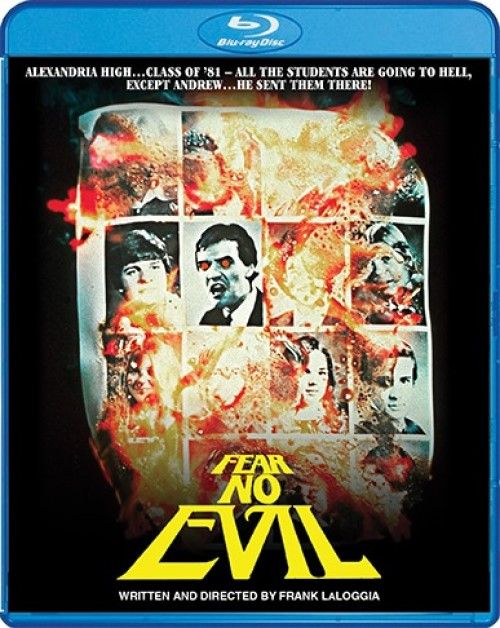 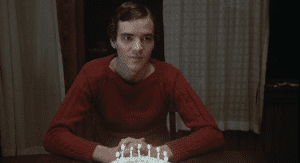 Movie
Ahhh yes, the 1980s, my absolute favorite decade for horror movies. Many of us thought that Fear No Evil would never come to Blu-ray despite it’s cult horror status. The film isn’t exactly the greatest of the supernatural genre, but it was a labor of love and indie film making down to its very roots, and thusly was one of the titles that really does deserve the loving touches of a boutique studio like Scream Factory. Anchor Bay once held the rights on DVD, and I was pretty worried that Lionsgate would never get around to releasing it IF they even still had the rights, but our wishes have been answered on one of my favorite studio labels!

Fear No Evil was brainchilded by Frank LaLoggia, who was tapping into the industry trend of Satanic battles between good and evil and other various religion based horror movies ala The Omen and others of its ilk. Back in the 1970s Satan was the biggest cultural “threat” of it’s time, and films capitalized on this paranoia and fervor with gusto. LaLoggia was barely able to get funding for the film though, and he was forced to shoot the entire production on a fraction of a fraction of a shoestring budget, barely able to even pay his low level B grade actors on time. However, for some magical reason Frank coaxed every last bit of effort and visual wonder out of his cast and crew, and put for a gory, insane, and downright hilarious anti- film that actually holds up in today’s horror world and has a cheesily nostalgic bite to it.

After Lucifer fell to earth, God sent three Archangels by the name of Gabrielle, Mikhail and Raphael to vanquish Lucifer’s attempts to corrupt earth before the second coming. However, Lucifer has gained the upper hand, as only Mikhail and Raphael had reincarnated in human form. Raphael (John Holland) was able to kill the mortal form of the evil one, but was forced to live out his days in prison for killing what seemed to be a human male, leaving only Mikhail (Elizabeth Hoffman) left to look for the new incarnation of the devil himself and defeat him by herself if need be. 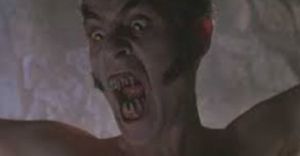 18 years later a brilliant, but shy, boy named Andrew Williams starts to realize on his 18th birthday that he’s not exactly normal. He’s always been a bit “odd” in his punk rock influenced high school (seriously, there are a half dozen recognizable songs from The Ramones, B-52s, Sex pistols and several others that play during the high school scenes), but now that he’s 18 his more devilish nature starts to peak through. As Andrew’s power grows, so does the resolve of Mikhail, who has just come to realize that Gabrielle has finally incarnated into human form, giving her some reinforcements in the taking down Lucifer once more before he takes over Andrew completely.

The backstory of Andrew and the three Archangels is a bit weak, as LaLoggia dumps MASSIVE amounts of backstory on the viewer, delving into secret heavenly missions, reincarnation, and a battle that is certainly going to be replicated later on the in the film. That being said, once LaLoggia shifts focus to Andrew and his over sexed high school classmates things get a bit ore interesting in more ways than one. I, for one, would rather have seen more focus on Andrew as he changes, as the bullying and ostracizing of the sensitive youth would have made for a more engaging transformation from boy to devil in my opinion.

The film is ridiculously cheesy and not a great film by ANY stretch of the imagination. We have Andrew howling like a werewolf and cackling in black makeup and a stretchy black robe near the end that feels more like a parody than an actual bit of horror. Even the zombies he resurrects to do his biddy don’t really scare at all. The real redeeming factor is the relationship between the wise old Mikhail and the confused Gabrielle (Kathleen Rowe McAllen) and the gore that the film doesn’t shy away from using. The movie itself is more a nostalgic bit of history due to the fact that it gained some pretty popular cult status over the years along with the notoriously slim budget that Frank LaLoggia somehow made into an actual movie.

Scream Factory boasts a new 4K remaster, struck from the original film negatives, and the results are actually rather spectacular. Fear No Evil was shot using nothing but the cheapest of the cheap cameras and locations, so you can be sure that it has never looked very good on home video, and there’s only so much cleanup one can do to a low budget flick like this. Comparing to my ancient memory this new master look really really good, with a nice organic layer of grain that looks very natural, and some real pop with the colors. Some shots are more grainy than others, but the details on screen are really jaw dropping. Sometimes a bit TOO jaw dropping as it makes it much easier to see the makeup on the ghouls, or the fake rubber breasts on the schoolmate at the end. Blacks are deep and inky, and despite some low light grain spikes, show more than enough fine detail to please this reviewer.

The 2.0 Mono track in DTS-HD MA won’t shock and awe listeners, as Fear No Evil wasn’t exactly mixed to wow the audience with the limited budget that LaLoggia had at his disposal. The track is solid enough, with good vocals and some strong ambient effects. One thing that I really appreciated is that the highs aren’t overly harsh and blown out during loud screaming moments like so many other films of this era. It’s a solid mix, and does what it was intended to on a budget. Get the dialog and score across.

Fear No Evil is a bit of 80s schlock horror that was NOT on my radar for a Blu-ray release until I saw that Scream Factory had picked it up. Watching it again some 20 years since my last viewing (I never saw the Anchor Bay release), I was surprised how well it held up, but also have over the top gothic cheesy it is as well. It’s not the best of the 1980s horror films, but it is an cult favorite that fits right into Scream Factory’s motif of releasing classic and cult classics on Blu-ray and DVD. The new 4K remaster looks absolutely fantastic to my eyes, and the extras are rather copious, making this a must get for fans of the film. It’s a bit outdated and cheesy if you haven’t seen it before, no way around that, but it does have it’s nostalgic charms.

Recommendation: For the Cult Fans

Thanks for the review. I can't remember seeing this one long time ago so will check it out once on amazon prime/netflix.