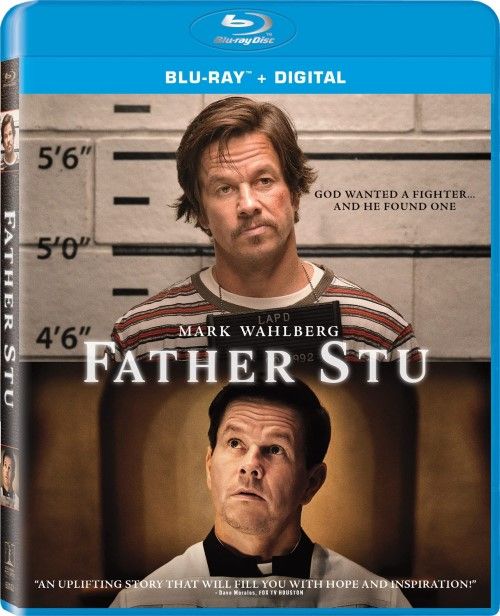 Movie
I always find it amusing how religious oriented films USUALLY are so incredibly lopsided when it comes to critical vs. audience opinions and reviews. Almost always you’ll see a much lower score based off of critical reviews than the audience, and the same is true for the Biopic of the real life boxer to priest story that became a passion project for Mark Wahlberg. Now, some of that lopsidedness can be attributed to bias among viewers vs. press, as the story is going to be mostly viewed by an audience who is receptive to religious overtones, and critics…..well….lets just say that critics tend to swing the opposite direction many times. To flip the coin (so to speak), there’s also the fact that the choir that is being preached at is more likely to forgive narrative faux pas in lieu of the message, while critics are more critical of said narrative issues. In the case of Wahlberg’s Father Stu, it’s really a little bit of both.

Mark Wahlberg has really been leaning into his Catholic face in recent years. The man has supposedly had a spiritual re-awakening and along with life long Catholic Mel Gibson (whose girlfriend actually wrote and directed the film) really pushed to get the story of Catholic Priest Father Stuart Long made into a movie. However, no studio seemed willing to touch it with a ten foot pole, and after getting thrown around for the better part of 6 years, finally came to fruition when Wahlberg funded the movie with millions of his own dollars, and shot it on a shoestring budget over the course of 30 days during the height of 2021 pandemic era.

Father Stu tells the real life story of scrappy ner do well Stuart Long (Mark Wahlberg), who grew up in an Atheist home and became a low level amateur boxer. But when he gets diagnosed with issues due to a fractured jaw, Stu is forced to give up the mediocre life of a mid level boxer and make something of himself. Much to the chagrin of his mother (Jackie Weaver) and his drunk estranged father (Mel Gibson), Stu decides to move to L.A. and become an actor. His acting dreams are pretty much nipped in the bud, but he DOES latch onto a beautiful young Hispanic lady by the name of Carmen (Teresa Ruiz).

Carmen happens to be a devout Catholic girl who is not about to be getting involved with a heathen like Stu, that is until Stu decides to convert (not so altruistically I might add) in order to get into the good graces of his soon to be girlfriend. But even that seems to get sidelined when Stu gets into a motorcycle accident and gets run over by a truck. Not expected to even wake up, Stu defies the odds and upon his awakening has an actual “come to Jesus” moment and decides that he’s being called to the priesthood. Naturally this doesn’t actually please Carmen very much as she was hoping for a wedding band, but Stu is bound and determined to become a man of the cloth and give others the absolution he was given.

Again, Stu’s life is anything but easy. Soon after entering the seminary he is diagnosed with yet another problem. This time in the form of a muscular disease similar to ALS that robs him of his motor functions and muscle control. Now, day by day he’s tested with his own failing body, and yet above all else, is given the grace to continue on.

I have mixed feelings about Father Stu. I really enjoyed a lot of the movie, and as a believer myself was already familiar with the story of the legendary priest who served only 6 years before dying in 2014. Also it’s really nice to see Mel Gibson digging his way out of the blacklisted pit he got himself into some years ago. It’s just that the narrative DOES have some issues. It really feels like some of the bones and sinews of the story of Stuart Long got left on the cutting room floor in favor of scenes that amplified Stu’s many rebellious problems. Not to mention the fact that it’s going to be VERY controversial among the religious circles due to the copious use of swearing. However, on that aspect I actually understand why Mark Wahlberg and Gibson were so adamant about leaving it in. It really accentuates just how fallen Stu was before his rise to spiritual leadership (although they pushed it just a bit too far after his conversion, as the actual Father Stu was famous for giving up swearing and having a swear jar on his desk after his conversion) and the rough and raw point of view that made him so unique.

On the whole it’s a rather good movie, with an uplifting storyline. I did have some minor issues as Father Stu himself seemed a bit “TOO” Mark Wahlberg at times. That’s great for the first ½ of the movie where we get to see the cocky and sure fire Stuart, but after he converts to the priesthood and was forced to wear the fat suit as his Father Stu’s body started failing, it just seems like we’re still seeing just Marky Mark. One thing that was really fun was the fact that Mel Gibson still has it. The man steals ever scene he’s in with his rough and raw charisma that Gibson was known for back in his heyday. Stu’s father isn’t in a whole lot of the movie, but every scene he’s in the audience’s eyes are just drawn straight to him and you can’t tear your eyes away.

Rated R for Language Throughout

The 2.39:1 AVC encoded image is pretty good, and generally excellent. There’s plenty of fine details in most shots, but also a few soft shot images that flicker in and out of the movie at will. When it’s brightly lit outside the image is pristine and picture perfect. Inside we have strong black levels, good primary colors (the red in Malcolm McDowell’s office really pops) and only a few bits of banding to mar said dark shots. The one weird thing about the film is that it’s heavily HEAVILY tinged to the yellow end of the spectrum, with a more aged “70s” look to it (even though it starts out in the 80s during Mark’s boxing days at the beginning of the movie). That heavy HEAVY yellow tinge can really mess up faces, giving it a jaundiced and turmeric yellow tinge to the heavily caked on makeup on the characters faces (Mark’s makeup gets so obnoxiously thick near the end that he looks like a wax statue). It’s a good enough image, but that yellow tinge is so obtrusive at times that I was genuinely wondering if something was wrong with my display until I switched sources and played a few other discs.

The 5.1 DTS-HD MA track is more than capable of handling the minimalistic sound design with ease. The track is well done, with good vocals up front, but it’s also not going to be a shock and awe track. It’s not a fault of the track itself, but simply due to the fact that this is a very low budget, low key, highly dialog dependent drama. About the only instances of heavy surround usage and bass are during the basketball game and Stu’s car crash. It’s simply a high dialog centric film with 99% vocals. That being said, I DID have a few issues with the subtitles needing to be popped on due to the fact that Mark like to mumble a bit. Otherwise, very capable mix.

Father Stu is a solid biopic about an incredible true story, but it is not a perfect film, and is somewhat in the middle between the lopsided critical reviews and the audience ratings. Marky Mark put a TON of money into this passion project and it shows. Especially with the pure charisma of Mel Gibson adding some extra special sauce to the mix. The Blu-ray itself is pretty bare bones with a few minor extras, and a decent set of audio and video scores. Worth checking out if you’re a fan of religious themed stories. Just be warned that it IS rated R for a reason.

Thanks for the review. I will check it out once available on amazon prime / netflix.

This movie for me is a one time watch..