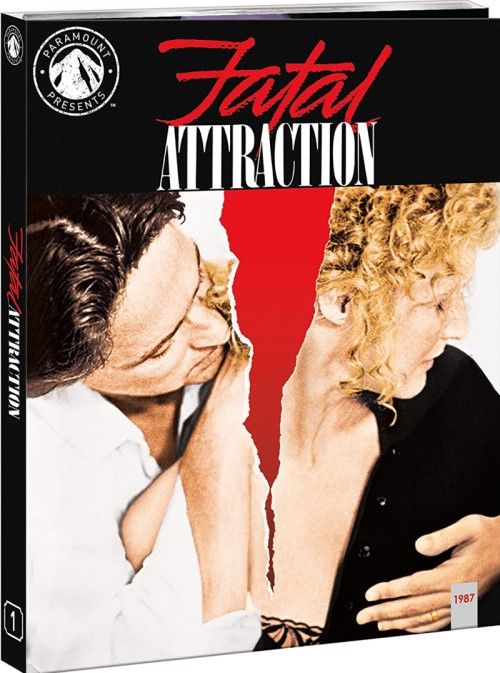 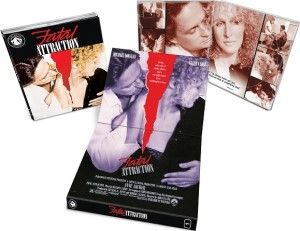 Even though I started with the “3rd” film in the Paramount Presents lineup, I’m saving the best for…...second? Ah well. Either way, Fatal Attraction is the first film in the new premium line up and it’s a banger to start out with. 1980’s thriller was a smash hit from 33 years ago, and was jokingly referred to as the film that scared men into staying faithful to their wives (at least for a while). It was creepy, it was pure 80s cheese, and it had the power house of Michael Douglass as the male lead, and Glenn Close turning in such a disturbing performance that everyone had to take notice.

Dan Gallagher is king of the world. He’s got a lovely wife Beth (Anne Archer), a daughter, and is an up and comer at his New York City law firm. However, he makes one of the most common (and one of the oldest) mistakes that a man like him can make. He catches wind of sultry book editor Alex (Glenn Close) and after a few sparks fly begins a tawdry affair with the beautiful and vivacious woman. It’s not that Dan doesn’t love his wife Beth, it’s just that he fell prey to the deceptively appeal of lust and fell in too deep. After realizing his mistake, Dan decides to call it off and say it was just an innocent fling, but Alex is having none of that. 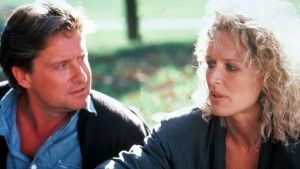 The seemingly happy and well balanced young woman begins to come unhinged, ranting and raving at Dan that he’s going to pay for messing with her heart. Thinking she’s just over reacting, Dan brushes her and off and goes back home to his wife and child hoping to just ignore it like it never happened. However, Alex is more than a bit crazy under the surface and the woman goes down a rabbit hole of post traumatic stress and mental instability, ultimately culminating into a white hot rage that turns her into a psychotic stalker who will do anything to destroy Dan’s family if she can’t have him.

Fatal Attraction is pure 80s and 90s Michael Douglas cheese and just that. A cheesy thriller at heart. But it’s really the performances that sell the thing. Back in the late 80s and the early 90s Michael Douglas was the king of sleazy thrillers (A Perfect Murder, Disclosure, etc) and he’s so glib and charming that you get sucked into his world. That being said, the real kicker for the film is Glenn Close. She turned in an absolutely legendary performance as the mentally unbalanced Alex. Watching her turn from vivacious and aggressively stable to depressed, and finally into a mentally unbalanced lunatic is nothing short of amazing. She completely absorbed herself so totally into the role that I saw her face whenever I saw Glen Close in a movie after that! Anne Archer also got nominated for an award that year for portraying Dan’s wife, Beth, and it’s a good thing too. We really needed a protagonist for the film as Dan is a cheating slimeball, and Alex is pure evil cookoo. Beth comes across as extremely sympathetic and the emotionally grounding character of the film. Without her we really would have had no one to root for, as it would have been two despicable people going at it. It’s the perfect three way triangle and makes the film so much better as a result. 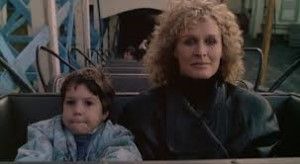 Well, this is a nice surprise. After I nearly had a heart attack watching To Catch A Thief I was very nervous about Fatal Attraction’s 4K remaster. Luckily this one doesn’t look to have been tinkered with at all in the DNR department, and the colors look great. This being the 8th release of the film on Blu-ray, its the very first time that it got another transfer, and Paramount did the film justice for sure. The movie has never looked better, and comparing them side by side is a revelation. The old 2009 Blu-ray disc was murky and a little overly grainy, and blacks were slightly muddied. It wasn’t bad at all and was considered a great transfer back 11 years ago for a high grain 80s release, but in today’s modern times remastering can do SO much more. The film’s colors are bright and vivid, and the slightly smokey look of the film is still maintained to perfection. Blacks are deep and inky, showing tons of shadow detail and the murky blacks are gone. There is SOME black crush in a few spots (such as when Dan goes to his car about halfway through the film), but it’s still showing tons more detail. The grain levels are untouched in terms of quality, but it is smoother and less chunky than it once was. This allows incredible amounts of detail to shine through and close ups are jaw dropping. Glenn Close’s white outfits are sparklingly clear and clean, and even though there’s some intentional smokiness, as I mentioned above, the film looks jaw dropping with this new transfer (makes me really wish this had hit 4K)

The 5.1 Dolby TrueHD track that’s one the disc is the exact same one that was on the 2009 disc, and it’s still perfectly serviceable. The mix for the film has never been truly great, even back in the DVD days, and it’s still just a middle of the road track. The film is mostly front heavy, with a smattering of sonic use in the background with the clashing of knives falling on the floor, or the score. Dialog is clean and clear, but there’s some harshness on the upper regions and some scratchiness when someone screams. The track is a bit thin, but perfectly intelligible at all times and gets the job done pretty easily. It’s never going to be an Atmos contender according some interviews with the director, but it is certainly a decent track. 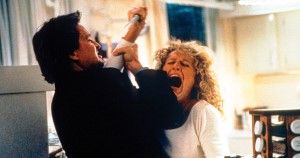 This new version of Fatal Attraction is actually worth it. I was nervous after To Catch A Thief, but Paramount has done a very good job with this and King Creole, so I’m chalking up To Catch A Thief as a fluke. The extras are very similar to the 2009 release, but the 4K remaster is really where the goodies are and it does do a very solid upgrade from the decade + old master that we’ve had issues and re-issued over the years. Definitely worth upgrading in my opinion.

Thanks for the review and happy to see the upgrade is good. Great movie.

tripplej said:
Thanks for the review and happy to see the upgrade is good. Great movie.
Click to expand...

So, I'm confused. Is this being released on BD and 4K UHD?

Todd Anderson said:
So, I'm confused. Is this being released on BD and 4K UHD?

there is no 4K UHD planned. The paramount presents line is a prmium line where they're giving all new 4K masters for some of their top sellers. Some will get 4K UHD (Days of Thunder, War of the Worlds, Top Gun), while others like this are just getting 4k master'd blus

Ah... ok. I'm still going to pick this up. One of those flicks that takes me back in time.

Do you know if they have any plans for Witness?

Todd Anderson said:
Ah... ok. I'm still going to pick this up. One of those flicks that takes me back in time.

Do you know if they have any plans for Witness?
Click to expand...