Earwig and the Witch - Blu-ray Review

Earwig and the Witch 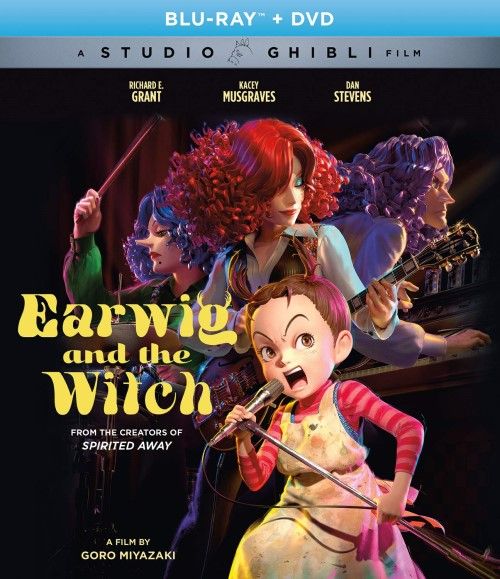 Movie
Son of famed director Hayao Miyazaki, Goro Miyazaki has made a definitive impression with his contributions to Studio Ghibli over the last 36 years. He’s best known for his fantasy and war efforts in From Up on Poppy Hill and Tales From Earthsea, but the man has also decided to take the studio in a new direction for this outing. Using the source book of the same name by Dianna Wynne Jones (a prolific author in her own right, but is most famous in regards to Studio Ghibli by authoring the book that Howl’s Moving Castle is based off of), he goes pell mell into the studio’s first completely CGI effort. Supposedly this is not a permanent change of pace for the studio according to the disc’s special features, but rather a creative outlet that Miyazaki wanted to use for this particular venture. A way to give new opportunities and outlets over the years, instead of being limited to typical hand drawn art that the studio is famous for.

Earwig and the Witch is is a strange film that shows heavy influences of the studio’s love of magic and fantasy, but blending it with some western influences that creates a strange hybrid that carries with it a rather frustrating story. The film opens up with a red headed witch narrowly escaping a magic yellow car as she takes her newborn child to be dropped off at an orphanage. Said abandonment is followed with a note that states that she will return for the child when she is no longer pursued by the “12 witches” (a note that seriously confuses the normie Matron of the orphanage). Fast forward to about 10 years later, and “Earwig” (renamed Erica Wigg by the Matron) is a rambunctious young girl who has mastered the art of manipulating those around her into doing what she wants. She’s got the matron and everyone around her doting on her hand and foot until a mysterious woman name Bella Yaga (very obviously taking inspiration form the Russian myth of Baba Yaga) and her silent cohort “Mandrake” take an interest in her.

Turns out that Bella Yaga wanted Erica (now back to Earwig) as a witches apprentice. A second pair of hands, so to speak, to help her out with her spells for hire that she uses as a means of employment. Earwig’s situation is pretty grim at first, with nothing but worms to eat and a mountain of work to get done. However, the conniving little girl soon starts to find the weaknesses (and secrets) of the magic house and it’s owners. The Mandrake (a vaguely demonic character) is the tortured artist at heart who doesn’t want to be disturbed, as he finishes up his novels in the back of the house and pines over the glory of the past when he used to be in a band called Earwig with Bella. Bella herself is about as foul as can be, but she has her own angers at the past and what happened with the red haired witch (who obviously was at the crux of their situation), but soon falls prey to the wiles of the tenacious Earwig. 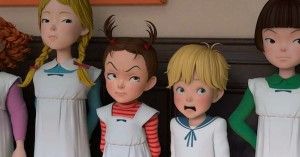 Earwig and the Witch is rather interesting at first glance, but suffers greatly by the third act. The film sets up the question of “just who is the red headed witch mother?”, then summarily ignores it for 90% of the film, and creates a simple tale about Earwig manipulating her new foster “parents”, only to ram in a quick 3 second scene that brings the film full circle, somehow managing to not answer a single question. The best way to describe Earwig and the Witch is that it feels like the opening portion of a novel. It sets the state for something bigger and more elaborate, and then ends just as things are getting good, leaving the audience wondering just where the rest of the meat and potatoes are in this meal. Supposedly there is no plans of following up on Earwig and the red headed witch as Goro Miyazaki has made it clear that Studio Ghibli has never made a sequel, and has no plans to do so either. The result is a film that feels like “part” of a much bigger film, just without any intention of ever completing the franchise.

The film itself works in many ways, but also falls apart in others. Earwig is charming and tenacious, but she’s also a rather manipulative thing who has very little redeeming qualities. I’m sure it was an effort to make Earwig more than just the demure and meek hero of typical Studio Ghibli movies, but the audience just views her as a bit unredeeming in her actions. It’s not a massive thing, but the more you study her character, the more you start to like little Earwig less and less. The best characters in the movie start out as the worst. Both The Mandrake and Bella Yaga start out as twisted and damaged characters, but the more the movie progresses the more you realize that they’re just trying to heal from the past in their own ways, and the outcome has made them a bit more twisted than they would have liked. You get to see Earwig soften their edges and heal just a bit, but sadly leave out a big portion of what COULD have been by wrapping up the story WAY too soon (that ending is an exercise in frustration).

Being that this is the first CGI film for Studio Ghibli, I have to admit that I was a bit surprised. Not with the transfer itself for the most part, but due to the fact that Earwig and the Witch’s animation is surprisingly low detail fare that would be seen on a more cheaply made American film. The faces and backgrounds have that highly plastic look to it along with herky jerky motion that you see in DTV films, just with better and more unique drawings for the backdrops and a distinct lack of artifacting (DTV animated films usually don’t care to give the film enough bitrate to stave off banding and black level issues). The film is very brightly colored ala Studio Ghiblil fashion, and the styling of the film is VERY appealing, but the low budget CGI tends to rob of it major detail. Characters appear smooth and lacking nuance, even though Ghibli does a fantastic job rendering things like the worms, or the highly cluttered room where Bella creates her spells. It’s a solid effort and very well done by Shout Factory, but the limitations of the basic CGI keep it from being more appealing (something which is a bit of a shock coming from the lavishly hand drawn art styles that Ghibli is famous for).

Earwig and the Witch comes to Blu-ray with the typical Japanese and English DTS-HD MA tracks to enjoy depending on what dub you’re partial to. I’m partial to the Japanese dub as it sounds better voice acted (just my opinion though, as I’ve talked to several other viewers who preferred the English dub) and aside from the obvious language differences, the mixes are pretty much the same thing. The mix is robust and rewarding, with a solid front sound stage that makes good use of the mains and center to create a fun environment incise the magical house, as well as ample surround usage for the spells, crashing doors, and obvious excitable moments. The bass is generally restrained, but certainly can come out to play when it wants to (such as the rumbling during the car chasing in the opening scene, or the intense rage of the Mandrake during the “worm” debacle). It’s a good mix, never really extending itself too far into greatness, and will please viewers no matter what option they choose (although I was frustrated with whoever did the subtitle translations. They felt WAY more like dubtitles than literal translations, especially when you’ve heard as many Japanese tracks to start picking up the actual words used vs. What is shown on screen with the subs). 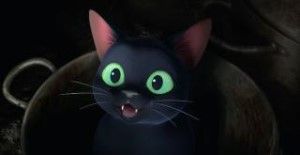 The film isn’t the best of the Studio Ghibli lineup, but neither is it the worst. It’s an interesting diversion from typical Ghibli fare by one of it’s more unique directors, but sadly falls far short of what we have come accustomed to from the prolific studio. Especially when it’s one that was helmed by one of it’s bigger directors. The flick is fun, but never overly revealing with the story line, leaving it feeling stilted and left hanging at the end. The Blu-ray is well done, but never OVERLY awesome (due in part due to the simplistic animation style of the CGI used). All in all, a fun enough flick, but one that will appeal mainly to Ghibli die hards rather than a more broad audience.