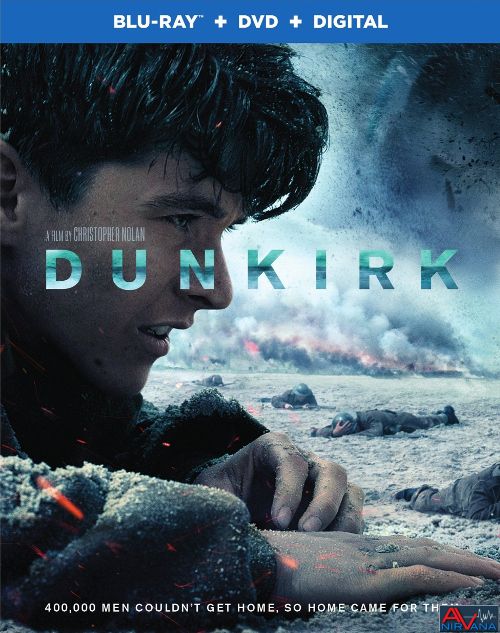 Movie
Christopher Nolan has his own fan club, but also has his own hate club as well. The polarizing directing isn’t going to be as divisive as say, Darren Aronofsky, but he does things a certain way that either endears the man to you, or makes you want to boycott his films (there seems to be very little middle ground). His Batman movies have become a thing of legend, and I tend to REALLY enjoy most of his films (although I may grumble and whine a bit about his Batman films being better crime movies than they are actual Batman related movies, but I digress), except for a select few. Nolan is one of the rare few that pretty much EXCLUSIVELY shoots his movies on film ONLY (Interstellar being one of the rare few to buck that trend) and this gives his movies a very organic and lifelike appearance. A move that has really endeared me to his visual style, even if I don’t always enjoy a movie of his to the fullest.

Dunkirk is one of the only war film made by the man and it garnered HUGE critical acclaim at the box office for its nontraditional look at one of the most tragic events in World War history. I ignored as much of the clamor for the film as I could as I wasn’t able to view it theatrically, and even went so far as to ignore the trailer that Warner sent to me for the film’s home video press release so that I could go in as blind as possible, which made the whole experience just a little bit better (in my humble opinion). It’s a mixture of traditional storytelling, with an overarching story that is more about seeing what happened that fateful week through the eyes of three different (and distinct) perspectives. Much like viewing a painting through the eyes of different people, the film adapts and changes to those specific view points, coalescing into a more cohesive point of view as they all come together on the beaches of Dunkirk at the end of the film.

It’s almost hard to give a synopsis of the plot, as there really isn’t a traditional three act arc to go through. What I can tell you is that the characters are inconsequential, at least from a narrative perspective. Sure we have Cillian Murphy, Tom Hardy, Kenneth Branaugh and Mark Rylance (Mark gets the brunt of the dialog for a single character), but there faces are almost lost midst a sea of unknown actors, and their lack of any real focus allows you to stand far back and watch the pieces being moved across the chessboard instead of being distracted by the “name brand” actors on screen. There is dialog, and it moves the plot along just a little, but mainly it is there to show the heart and soul of these brave men and women on the beaches and in the sea as they desperately try to survive.

It’s near the middle of the war, and Dunkirk beach has become a death zone for the allied forces. Almost 400,000 men have been pushed back to the French beach as their enemies drive them back to the sea. A British effort to save 30,000 men of theirs on the beach expands into a full out rescue effort by the Navy, AND the effort of civilian boatmen to get over 300,000 men off that beach to be able to fight another day. The best way to describe Dunkirk is to say that it is like the storming of D-day in Saving Private Ryan, but in reverse, and stretched out to a full feature length film.

Each aspect of the movie is given an intensity and fire that is intoxicating and filling to the core. The first involves 2 grunt soldiers who will do whatever it takes to get off the beaches, even if it involves stealing, lying, and sneaking their way onto a boat to get off the death trap. The second involves a group of sea rescues as we follow a civilian boat helmed by Mark Rylance’s character (and his two sons) as they strive to pick up the drowning and marooned sailors that are downed out in the ocean. The third comes from the point of view of the air force pilots who are patrolling the air space in an effort to shoot down the Nazi planes who are bombarding their forces while they wait for the RAF to come to their aide.

There are no real IMPORTANT characters, at least in the way we normally think about important characters on screen, but the movie steps back from the chaos and allows us a birds eye view of the spectacle. Letting us see the characters being moved around like chess pieces and watching each of the three perspectives comes closer and closer together. While I loved the nontraditional narrative structure that Nolan employed here, I do admit that I can see how this film couldn’t have gone on for much longer than the 1 hour and 46 minute run time that it did. That sort of storytelling has its limits, and the audience’s patience would have been stretched a bit too far, and all the goodwill that the movie has striven to make palatable would have dissipated. Even then, the film has garnered some critical attention for being “boring” to a select few people, and I can actually understand why. Those who don’t appreciate this method of telling a visual story without any real main characters may find the experience just a bit frustrating. But given the proper outlook, I feel most people will enjoy the visual narrative.

Rated PG-13 for intense war experience and some language

Wow, just wow. I’ve been privy to quite a few 5 star Blu-ray and 4K UHD films the last couple of weeks, and I almost feel bad for giving ANOTHER 5 star rating for picture quality, but this just HAS to be given as much praise as I possibly can. Shot on a mixture of 65mm film and IMAX 15/70, Dunkirk is just a stunning picture to behold. In true Christopher Nolan fashion, the film features a shifting aspect ratio that jumps between 2.20:1 (an aspect ratio that is gaining in popularity lately) and IMAX shots that have been framed to 1.78:1 (as is the norm for home video representations of IMAX shots). Usually this is a glaring move that seems to take the viewer out of the audience when the film opens up to 1.78:1, but there are soooooooooooooooooo many IMAX scenes in the movie that it’s almost an oddity to see the cameras just back down to 2.20:1, and even then, it’s really not that noticeable thanks to taller nature of 2.20:1. The film is very heavily contrast intensive, with low color saturation levels being that Nolan filmed it with a distinct teal and green filter application to the overall tone of the movie. Browns, greens, and teal oceans show up brightly and clearly, but the rest of the color spectrum (even blood) seems to be fairly drained from the image (outside of the final shot of the soldier walking into the newspaper office, which seems to be much brighter and cleaner). The film is amazing looking, with incredible detail thanks to the wonderful film stock and the copious amounts of IMAX camera scenes throughout the movie. Scenes 5 and 10 stand out as stunning examples of fantastic contrast and razor sharp detail, and the movie in general is just one single piece of demo material. I truly love many of these new encodes, but Dunkirk stands to best many other ones for sheer scope and awe inspiring beauty on your display. Blacks are deep and inky (with only one scene near the end that seemed a bit washed out), and there are no major artifacts that I could see.

Right off the bat you’re probably wondering, “why is there no Dolby Atmos or DTS:X!”. Well, Nolan is a persnickety director, and he makes it a habit to be fully involved in the sound mixing of his film, and he made a conscious decision to stick with 5.1 here (much like he did with Insterstellar), and as such it is a director approved mix that has been given a loving treatment from his majesty, King Christopher Nolan (wink and a nod here). While I personally would have preferred an Atmos mix, this 5.1 DTS-HD MA track is NOTHING to sneeze at. In fact it’s one of the best 5.1 mixes I’ve heard to date and is a sonic assault on the ears. This track is LOUD and just full of LFE from start to finish. I honestly think that LFE was more of a main character than most of the people on screen, with a thunderous roar to the intense and anxiety filled score thanks to Hans Zimmer, and a pulsating energy that just drips from every pore. Explosions will make your pant legs flap and your neighbors REALLY ticked off at you, while the thick and heavy rumble of sea faring engines throb in the background. Vocals are crisp and clear, with the only real complaint stemming from the fact that some of the accents were a bit hard to hear with the action going on around them. It’s a fantastic 5.1 experience with the only reason that I’m knocking off a half star being that a 7.1 would have just a tad more immersion than the 5.1 has to offer. Otherwise this is a picture perfect track that just exudes energy and intensity.

Dunkirk is a fascinating film that foregoes a traditional narrative for a much more visual approach to storytelling. I’m not sure how it will hold up over time, but as a first time view I was completely enthralled with the approach (even as I had to agree that the non traditional storytelling did seem a bit odd at times (which may explain the 1 hour and 46 minutes run time instead of Nolan’s typical near 2.5 hours for his films) but overall I really enjoyed the film. The 4K UHD and the Blu-ray alike are destined to be demo films for years to come, as they both exhibit some of the finest attention to nuanced details in both the audio and video departments to date (even though some may be a bit disappointed at Nolan’s use of 5.1 in a 7.1 and above norm. Well worth picking up if you’re a fan of dramas and war films in the slightest, and a must own for any self respecting home theater enthusiast.

Thanks for the review. Will get this one.

Thanks for the review. Yes I read that some people were not happy with the 5.1 mix that Nolan decided upon. It is strange indeed in this age and time to at least not receive a 7.1 mix. I will be watching it though.

yeah, Nolan is very particular about his mixes, but the track is nothing to shun the movie over. It's STUPID good even with that in mind. I was battening down the hatches going "ohhhhhhhhhh, neighbors are gunna hate me tonight!"

I had forgotten about Dunkirk - reading your review, I want to go get it! It was great in the theater, but would be even better at home!