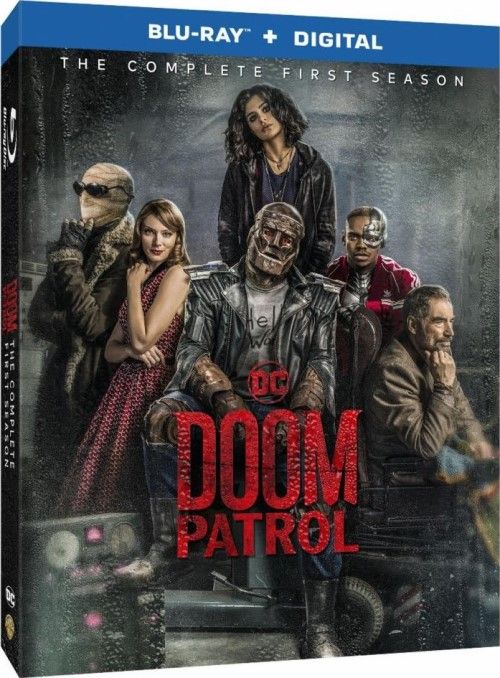 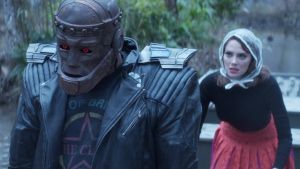 Movie
One of my biggest pet peeves of the modern era of streaming is the fractured nature of the medium. It used to be Netlix, Hulu and some Amazon prime, but now EVERYONE and their mother has a streaming service. The DCTV universe was originally sequestered to The CW for the most part, with the Arrowverse taking up the bulk of the shows, but in the last year or two the allure of having their own streaming service was too much for poor DC. Thus the DC streaming service was born, helming such shows as Titans, Swamp Thing, and yes…. Doom Patrol (along with a host of other classic shows and animated series to fully flesh it out). While I liked (and reviewed) Titans: The Complete First Season a few months back, the DC Streaming service really hit it’s stride with two shows. Swamp Thing (which unceremoniously, and undeservedly) was canceled with only a few episodes left, and the incredible Doom Patrol.

Introduced in Titans season one (with someone else besides Timothy Dalton playing The Chief), Doom Patrol is the most exciting and unique superhero show to come out in the last several years. Arrow and The Flash are iconic in that they established a long running superhero world to thrive in, but Doom Patrol is the culmination of quality and excellent storytelling that puts it on the top of the heap, and for very good reason. The show is about a ragtag group (aren’t they all) of damaged “heroes” who are literally the monsters of society. A mysterious crippled man only known as “The Chief” (Dalton) has pulled them from the ashes of their own self demise over the decades and have given them a haven in his home (dubbed “doom manor” by narrative villain voice of Alan Tudyk), where they can have a safe respite from a world who considers them “freaks”.

The first episode sets the groundwork for the entire show. We get to meet Cliff (Brendan Fraser) a former Nascar driver who ruined his life with women and fame, only to get reborn after an accident as a robot with his brain implanted. Then there’s caustic Rita (April Bowlby, of Two and a half Men fame), a 1940s actress with a god complex who was brought down to earth in an accident that turns her into a gelatinous freak when she loses her concentration. Not to mention the quiet and seemingly normal Larry (Matt Bomer), who was once a test flight pilot that quite literally crashed to earth when he ran into a radioactive field which bonded his scarred bonded with an interdimensional being, turning him into a man with some “split” personalities if you will. Last but not least (and talking about split personalities) is crazy Jane (Diane Guerrero), a woman with 64 individual personalities (each with their own skills and powers) who was experimented on years ago. All of these “freaks” are living with The Chief in his own as a sort of rest home for the disenfranchised of the world, learning how to cope with their various disadvantages and becoming stronger as a result. 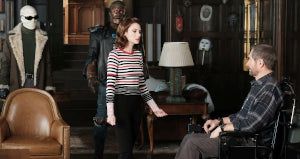 Their little support group is shattered when our narrative voiced villain Mr. Nobody (Alan Tudyk) shows up, having finally found The Chief after our dynamic team decides to have an eventful night on the town, bringing all eyes to the podunk town in Connecticut that he’s been hiding out in all these years. Now they’re forced to get out of the pity part that they’ve wallowed in for countless decades and band together to find an evil so powerful that they’re all pretty much doomed no matter what they try.

Don’t go in expecting Doom Patrol to be like most of the other DCTV shows, ESPECIALLY the Arrowverse shows. While the Arroverse shows like The Flash, and Arrow are very much broadcast friendly shows, and even though Titans was definitely more “mature” than those with it’s language and violence, Doom Patrol takes it to a whole different level. This is pure, unadulterated, hardcore fun that is simply bizarre and off the books crazy. The best way to describe it is compare it to The Watchmen meets Hellboy, meets a crack addicted writers guild. The characters are not your typical super heroes by a long shot, but rather damaged and flawed individuals who become “sort of “ superheroes. The series thrives off of being counter culture to the whole super hero genre, but instead of being angsty and “look at us, we’re counter culture!”, it survives off of the incredibly well thought out characters and their coping mechanisms.

Doom Patrol was a crazy comic run back in the day, and it’s even zanier here. I can’t stress enough how off the wall bizarre the series is, as there isn’t a show out there that can compare to it. It’s in a world all its own in that respect, and one of the more unique ones out there. As I said earlier, the characters are really the heart and soul of this series, and even though it’s heavily R rated (if you were to compare to the movie ratings world), none of it is forced or “angsty” like it comes across in Titans. These characters are the bottom rung of society, and as such they have raw edges and disgusting character traits that make them who they are. Brendan Fraser is absolutely magical as the robotic Cliff, putting an amazing amount of pain, suffering, and harsh humor to mask said pain into his persona. Matt Bomer’s unrecognizable face does a great job as Negative Man (Larry), and Orange is the New Black’s Guerrero is incredibly complex as Crazy Jane. The one that really surprises me though is April Bowlby as Elasti-Girl (Rita). There is such a complex array of emotions going on under the surface of her character, and April plays through the array of them with amazing alacrity. She’s the most hateful of the group, but also one of the most empathetic and pitiable ones as well. You want to hate her, but can’t get to that point, as her redeeming qualities and painful experiences bond you to her even more. The addition of Victor...e.g. Cyborg.. was a bit of a strange addition to the crew, as I feel he would have been better fit in Titans, but he works well enough. But the real show stealer is no surprise her. Alan Tudyk is pure cinematic gold as the twisted and maniacal Mr. Nobody, adding a wonderful sense of wry humor to the show, as well as being a really well crafted villain. 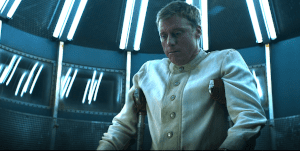 The 1080p image is a nice one to look at, and the 2.40:1 framing gives it a more cinematic and epic feel to it. The show is typical of many DC TV shows, with crisp digital photography, great close up detail, and a warm and inviting color grading that alternates between cool blues and rusty, earthy shades. The 2.40:1 framing really opens up the look of the show, and allows the multiple people on screen to take center stage without pushing images off to the sides like many 1.78:1 framed shows do. The copious amounts of CGI (much of it just for the main characters themselves) can look a bit soft due to the fact that this didn’t have a $200 million budget, but that softness isn’t too egregious and is right in line with many other TV shows in regards to overall image quality. 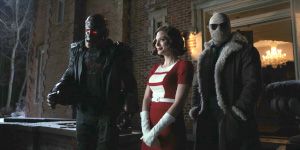 While Doom Patrol IS a super hero show, it’s main focus is that of a character drama, thus the dynamics and aggressiveness of the track play to a softer dialog driven mix. The show can be incredibly front heavy (which is natural for a talky film), but it can activate the surrounds and low end quite a bit as well. Action scenes are heavy and intense, filled with solid bass and a creepy score that flows throughout all 6 channels. Sometimes the score can be a bit TOO intense, and drown out some vocals, but this is still a very precise and clean sounding track with good ambiance.

Critics raved about Doom Patrol so much over the last year that the cynical side of my was expecting to be heavily disappointed. However, I can happily say that this is not the case. The series has it all. Crazy antics, super powered battles, nudity, F-bombs, donkey farts, and Alan Tudyk gleefully cackling along as a delightfully twisted villain. It’s a great character study on one hand, and a lunatics prize on the other, garnering an incredible 95% on Rotten Tomaties and probably my favorite superhero show of the year (albeit a very different one). The Blu-ray from Warner Brothers is solid on the audio and video, with a tiny smattering of extras that sadly could have been more fleshed out. But don’t let that stop you from grabbing one of the best shows of the year, and one that has been actually renewed for a second season much to my happiness. A must see for the fans of twisted super hero shows.

Thanks for the review. Never heard of this one but after reading the review, will check it out.

I wouldn't mind checking this out, but I don't want to buy it. I wonder if it will ever come to Netflix or Prime.