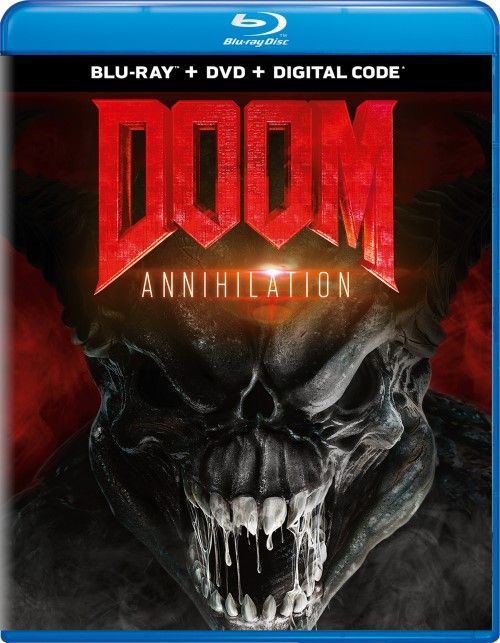 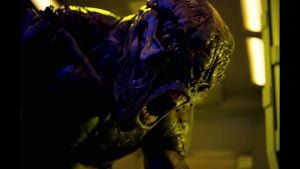 Movie
Doom has not gotten a lot of love on the big screen. Coming from a rabid Doom video game fan since he was a young kid, I actually liked 2005’s Doom with The Rock and Karl Urban in a guilty sort of way. It was in NO WAY a good movie, and an even worse Doom movie as well. In fact, it really wasn’t a Doom movie at all, but rather a generic space monster movie with a few monsters that looked like they came out of Doom 3 from a few years earlier (which is where they kind of took their visual inspiration from). Sure, we got the Ark and space marines and the BFG, but everything else butchered the Doom lore (not that there was much to butcher, the games were about as paper thin on plot as you could get) and made it as generic as possible, although I did kinda like the first person shooter mode at the end. As such, nobody was really begging for a sequel or reboot, so when this was announced to come out a month or so before the release of Doom Eternal, even though the Doom franchise is INCREDIBLY popular (one of the games inducted into the Video Game Hall of Fame back in 2015).

Still, as a fan of the games (played more hours than I care to admit on Doom 3 alone) I was curious to check it out. Especially after word on the street was that they were going back to the original lore of having the enemies be demons from the pit of hell, and bringing in some regular characters (not that there were many characters in the games to begin with besides Sarg and Dr. Betruger). Well, I tempered my expectations for a DTV film like this and those expectations were mostly met. The film itself is not great, but you can honestly tell the powers that be behind this particular entry was actually trying. It doesn’t try to reference the 2005 film at all, but rather does another re-introduction to the Phobos base on mars, the horrible accident that opens the portal from hell, then 1 hour and 15 minutes of a 1 hour and 37 minute movie gunning down hell spawn. About what you would expect from a video game with a paper thin plot.

There’s not much to tell here. The film follows the basic plot of Doom 3, following a group of space marines landing on Phobos base on Mars to act as their security detail. However, 20 minutes before they had landed Dr. Betruger (Dominic Mafham) had opened a portal dubbed “the ark” between Earth and Phobos, only for a massive energy surge to take out the base’s power (and of course the invading demons popping through the portal). The marines, headed by disgraced soldier Olivia Dark (Kate Nichols) heads into the base to find out what happened, only to run into zombified monsters who turn out to be members of the base’s staff. Further exploration leads them to the very heart of the base, where Olivia and her team find even greater horrors awaiting them, and none of them are going to make it back. 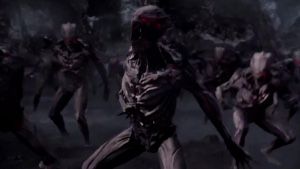 Doom: Annihilation is obviously taking a lot from the basic structure of Doom 3, and blending it with elements of Aliens as well (you can tell the Aliens references by the whole cryosleep wake up sequence, the marines outfitting their gear, and other subtle nods to the most classic sci-fi/horror action movie ever). Dr. Betruger is obviously the bad guy from the get go, but sadly he’s not nearly as prominent of a villain as he was from Doom 3. Any fan of the games will very quickly place him as the final “boss”, but instead he’s hidden behind his subterfuge mask the entire movie and doesn’t really reveal his evil intentions until the end. The rest of the movie is a bit of a mess, with soldiers gunning down villains left and right, with the demon spawn tearing up the space marines down to the last man (or woman in this case) with ease.

The production values are kind of hilariously bad, as they didn’t seem to have had a massive CGI budget for the film. Hell Knights are just men in rubber suits (although I do appreciate using practical effects over a CGI mess), and when Olivia heads to hell (yayyy! The Doom 3 expansion pack!) the CGI takes over and it’s definitely low grade. I will give them this though. They obviously wanted to stick much more closely to the video game lore, as we get to see some of the classic villains, and they retain their demonic roots instead of just making it a bad case of genetic mutations like the 2005 film. It’s a mixed back of dumb stuff stuck together, with some of it working, but a lot of it not. I kind of liked the movie for the effort put into it, but the weak ending low budget really shows just how paper thing the video game story was, and while that can work for a monster shootem up, it’s doesn’t work so well for a movie.

Rated R for bloody violence and language throughout 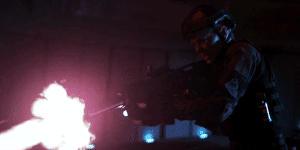 The 1.78:1 framed movie was obviously shot on digital video (pretty much anything not specifically chosen by the director is digital video these days) and it’s an all around capable looking film. The movie is dark and dreary throughout, with the lights off 95% of the time, with ambient green and blue emergency lights lighting the way. The details on marine uniforms is good, and you can see VERY obviously that the weapons are nothing but plastic props placed around AK’s and AR-15s due to the increased clarity of Blu-ray. Blacks are ok, but here’s where things get a bit dicey. There’s a lot of low level noise swarming going on in the darker shots, and it get s a bit muddled and washed out at times. Overall the disc does everything pretty well, but it’s not a pretty film at all, and was designed to be dark and murky like the games. 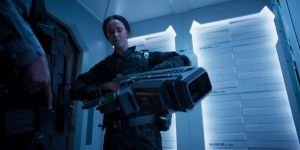 The 5.1 DTS-HD MA track fares a bit better than the video does, as it’s a rather capable track that checks off enough of the “action movie” check boxes to be more than pleasant for listeners. Dialog is clean and clear, and the surround channels are active with a lot of ambient monster noise in the lower level halls of the Phobos base. LFE is punchy and heavy, and there’s a few standout scenes such as the ship landing on Mars that really shake the walls. Said bass is a bit one notish at times, but it’s effectively creepy and rumbly to satisfy people for their high octane action tracks. It’s not a wide and spacious sound track due to the film’s constrained area, but it does well enough to get a solid thumbs up from me.

Doom: Annihilation is just what one would expect. A trashy DTV movie with poor production values and a paper thin plot. As much as I wanted to dislike it though, I actually had a decent time with the film as there was a lot of classic Doom lore invested in the property. Don’t get me wrong, this is utter garbage, but I had a semi decent time with it and actually kind of enjoyed leaving my brain at the door. But for casual fans or regular viewers, this is straight drek that should be avoided at all costs, but for hardcore video nerd fans it’s interesting enough to give a small watch. Universal’s Blu-ray disc is pretty mediocre too, with middling video quality, solid audio quality, and no extras whatsoever.

Can't imagine this one being good. Kinda pushed the limit just putting out the first movie. Same with the Warcraft movie(s).

I loved the Doom game too...what a shame they could not make the movies as good.

I played TOOOOO many hours on Doom 3 at 2:00 am getting scared out of my mind Probably the best game of the franchise. The first movie with The Rock was ok, but this is just ...... yeahhhhhhhhhhh

Thanks for the review. I was also a big gamer with Doom. Loved the game. Not so sure about the movie. lol. I will skip it. Will have to play the game again as nostalgia.

Remember all the Doom add-ons? I remember having all the floppy it took for the game, and the add-ons people made for it too.