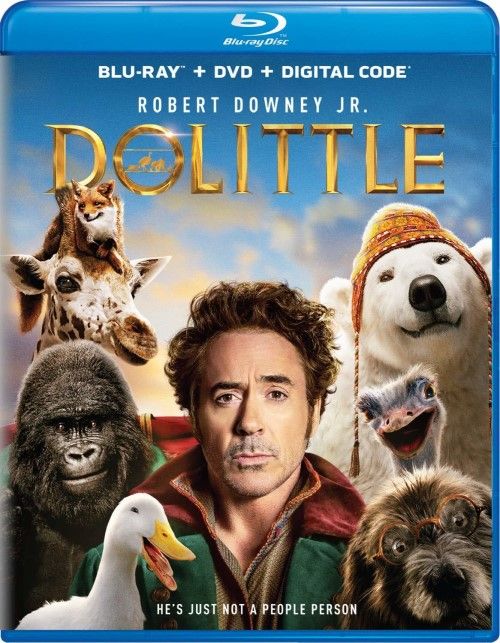 Movie
Ahhh Dolittle, 2020’s first epic bomb (outside of Covid-19). I grew up reading the original “Dr. Dolittle” books (a series of books created by Hugh Lofting from the 1920s through the 1950s) and have fond memories of wandering off into imagination land with the good doctor and his talking animal friends. As goofy as it was, the film starring Rex Harrison captured a lot of the essence of the books, and was a staple part of my conservative parents “allowed” films for me to watch as a youngster. However, watching the trailer for 2020’s Dolittle had me a bit hesitant. The trailer was awkward and cheesy, and Robert Downey Jr.’s accent was cringe worth to say the least. That being said, I’m willing to give most things a shot and hesitantly waited for the home video release instead of hitting it up in theaters.

Well, it seems that the rest of the world wasn’t too fond of what they saw either, as Dolittle was 2020’s first epic bomb of the year. Crammed to the gills with big name actors and highly recognizable names, and given a whopping budget of $175 million, Dolittle went screaming into the box office gutter, barely making $243 million worldwide (rule of thumb is that 2-2.5x original stated budget is required for a blockbuster to break even), and giving Universal a net loss of nearly $100 million when the dust settled. Not to mention the lovely 15% rating at Rotten Tomatoes and nearly every critic on earth panning it.

As I said, I’m one to give most everything a chance, and just because a movie isn’t loved the world over doesn’t mean it won’t become a favorite for myself personally (as much as people loathe it, I, Frankenstein is one of my favorite guilty pleasures), but even I could barely make it through this adventure without wanting to chug copious amounts of alcohol to numb what I was seeing.

Dr. Dolittle (Robert Downey Jr.) was a famed veterinarian in England who had the mystical ability to talk to animals. Due to his efforts across the nation, Dolittle was given a wonderful sanctuary to call his home. A sanctuary that is open to creatures from all species and a place where the man could retire in ease. However, he gave his heart to a human woman named Lilly who died in her search for the famed “Eden’s Fruit”, leaving Dr. Dolittle a broken man. Retreating into his sanctuary, Dr. Dolittle became lost to the outside world and something of a myth. But when a young boy named Tommy (Harry Collett) brings him a wounded squirrel to heal, the good doctor has to once more flex his wings. However, animals are not the only thing he has to save, as the Queen of England is on death’s door, and only the good Dr.’s skills can save her.

Come to find out the Queen has been poisoned with Night shade, and the only cure is the infamous Eden’s Fruit that brought about the demise of the Doctro’s wife, Lilly. Finishing what she started, the Doctor, Tommy, and a cadre of Dolittle’s animal friends set out on a fantastical adventure to find an island that has never been found, and a find a fruit that is only talked about in myth. All while trying to escape the devious machinations of the court doctor Mudfly (Michael Sheen), the blade of Lilly’s pirate father (Antonio Banderas) and his own sorrows in the process.

Dolittle is in short, an abomination. There is a huge amount of money behind the production, tons of CGI, and lots of well known names, but nothing ever comes together. The film is so ridiculously silly and ridiculous that it loses any shred of believability and enjoyability within the first few minutes. The dialog is stilted and cringey, with base humor that is akin to “pull my finger” in it’s maturity. I mean, we have an entire scene where Dr. Dolitle has to undo a impacted colon of a dragon, with his bare hands, and of course enduring a massive drawn out dragon fart for his efforts. Yes, we literally see him digging into the dragon’s rump and pulling things out midst fart jokes, I kid you not.

The story itself is also truncated and very jerky in it’s editing. On one hand we have a whimsical adventure going on, only to jump to narcissistic and moody moments with Dr. Dolittle pouting over his dead wife. The director can’t seem to figure out what type of movie he’s making, and neither can the viewer at the end of it all. Downey Jr. acts as weirdly as possible, blending his version of an English accent with a Scottish one, and having it fade in and out like Nicolas Cage in Con Air. The rest of the cast just act as cameos, tossing off one liners here and there as Dolitle makes one silly monologue after the other. Coming from a fan of both the books AND the 1967 film, this reboot is just terrible on all accounts, and not only that. A terrible effort to make a competent movie at that.

Rated PG for some action, rude humor and brief language

The 1080p Blu-ray disc looks phenomenal with only a few small issues to keep it from perfection. The digital production is glossy and shiny, with stunning close up details and great contrast levels. The CGI is a bit wonky at times (it looks a bit cheap for a 2020 film) but that’s not really a fault of the encode. The only problems (outside of being noticeable) is that sometimes the blending of the really good CGI and some of the weaker CGI shows the seams and cracks of the production. Colors are bright and cheery, and even the black levels are fantastic. I did notice some softness in a few of the CGI intensive scenes (softness that wasn’t there on the 4K UHD disc I might add), and I noticed some crush and banding in the darker scenes (such as the cave battle with the dragon). Otherwise a great looking disc.

Dolittle’s Dolby Atmos track (found on both the Blu-ray and the 4K UHD discs) is a good mix, but not really a stellar stand out. The movie can be very dialog intensive (surprisingly so for an adventure movie), which leaves a majority of the work in the front of the room. Said dialog is never a problem, and is firmly rooted in the center channel. The track’s more exuberant moments come out under the quest to find the Eden’s Fruit and does do a good job of filling out the channels. There’s some neat overhead moments in the battle with the dragon, and the directional shifts as characters careen through the air is quite nice. The bass is a bit under utilized in my opinion, and while it’s definitely there, is just a bit softer then expected for an adventure movie.

• TALK TO THE ANIMALS – Dolittle is surrounded by a motley cast of characters. Take a peek at all the fun the cast had giving each of the animals their unique voice.
• ROBERT DOWNEY JR. & HARRY: MENTOR AND MENTEE – Acting opposite a legendary actor like Robert Downey Jr. can be an intimidating experience, but Harry Collett handled it like a pro. See the unique bond the two actors formed on-set, and how Downey took the film's young co-star under his wing.
• BECOMING THE GOOD DOCTOR – See the process of how this team of talented artists brought this film to life, and how Robert Downey Jr. transformed into the iconic Dolittle.
• ANTONIO BANDERAS: PIRATE KING – Antonio Banderas discusses what attracted him to the project, his experiences working with Robert Downey Jr., and what he brought to the role of King Rassouli.
• THE WICKED DR. MÜDFLY – Who is the nefarious villain Dr. Blair Müdfly? Michael Sheen dives into his character's motivations for being Dolittle's foil.
• A MOST UNUSUAL HOUSE – It takes a special home to accommodate humans and animals alike. Explore the unique rooms and modifications that allow Dolittle to house anyone or anything - big or small.

Dolittle is a mess. The jokes fall flat, Robert Downey Jr.’s bizarre antics don’t really work, the story is all over the place, the CGI is actually pretty week for a 2020 film of this budget, and I really REALLY hope that the low box office results got the message across. The Blu-ray release is stunning though, with great video and good audio. The extras are a bit on the lackluster side, but in this day and age I really don’t expect much from the extras department (it is what it is, extras have pretty much gone down the toilet since the early 2000s). If you like the trailer and don’t mind a mindless PG rated babysitter, then it might be good for some young ones, but any discerning film goer is going to run away in terror from this one. Just skip it.