what bass said:
Been reading threads throughout the forum and ran into this.
What a great project! I'm glad it worked out and you like the sound. Looks fantastic.
Click to expand...

It is not too bad to build, and you can even find XLRs that are screw type instead of solder.

Update on the build... I pulled all 3 of the 50asxBTL modules and put each one in its own nice amp case that is just a bit bigger than the AmpCamp amps are.The smaller amps will rest on top of each speaker cabinet and only the woofer amps will be in the rack for all the base level speakers. I will still run the height channel amps in the rack. I am currently waiting for the big amp to get the machining done on it so it will hold 6 of the 125asxbtl amps. The reason I did this is I am now going to be pushing 450w to each woofer if needed... I was pushing about 60w to each woofer, and I felt that was a waste of the btl amps. The reason I was only pushing 60w was due to the impedance of my woofers. I goofed and bought the 4 0hm impedance woofers and it was giving me a 8 ohm load since 2 were wired as one, and the amp only pushes about 130 into a 8 ohm load. So in theory this should make a difference in the way it sounds too (I am hoping).

Now I am hoping someone who knows DIY will chime in for my next question. I purchased some "XL4015 5A DC Buck Step Down Voltage Converter Constant Current Power Modules" so I can run the LEDs from the 25v unregulared aux on the IcePower amp. They have voltage and current adjustments, and today I dialed 6 of them in for the voltage... I have them all set for about 3.08v with a 430ohm resistor on the hot side. To do this I used a DC Variable power supply I just picked up off of Amazon to use as a source. I set it up for 25v and then turned it off, and wired the step down convertor in and ran the output to my multimeter. I then dialed the voltage in to 3.08v on the stepdown convertor. Then I inserted a 430 Ohm resistor on the hot side and turned the power supply back on and noticed the voltage was exactly the same. I then tried a 39k Ohm resistor in place and the voltage barely dropped at all. The LEDs that I am using are the same ones as the AmpCamp amps use, and it runs at 24v, but has a 10k resistor inline.

Now for the question...since I have dialed it the 25v of the Icepower down to 3.08v and added just a 430 Ohm resistor is it safe to use? The LEDs say 3.2v to 3.4v as I recall for recommended range.. now the the thing they also stare is the Current as 20mv for the LEDs. Now the Icepower amp manual says max is 200mv, and if you are running a capacitive load you need to read the designer manual.

This is what the designer handbook says "When connecting capacitors to the AUX supply (+/-25V), be sure to have at least 3 ohms resistance in series with the AUX supply (max. 1000uF). Capacitors with a value larger than 1000uF require a larger resistor in series as shown in Figure 7. This is to prevent the auxiliary supply fuse breaking during power up.".

1: I am running a 430 Ohm resistor on the hot side for the LED...is this sufficient since it says at least 3 Ohms...or do they mean accross the positive and negative? I am assuming the part that says 470 is a cap.
2: How do I measure the mv...or do I even need to? 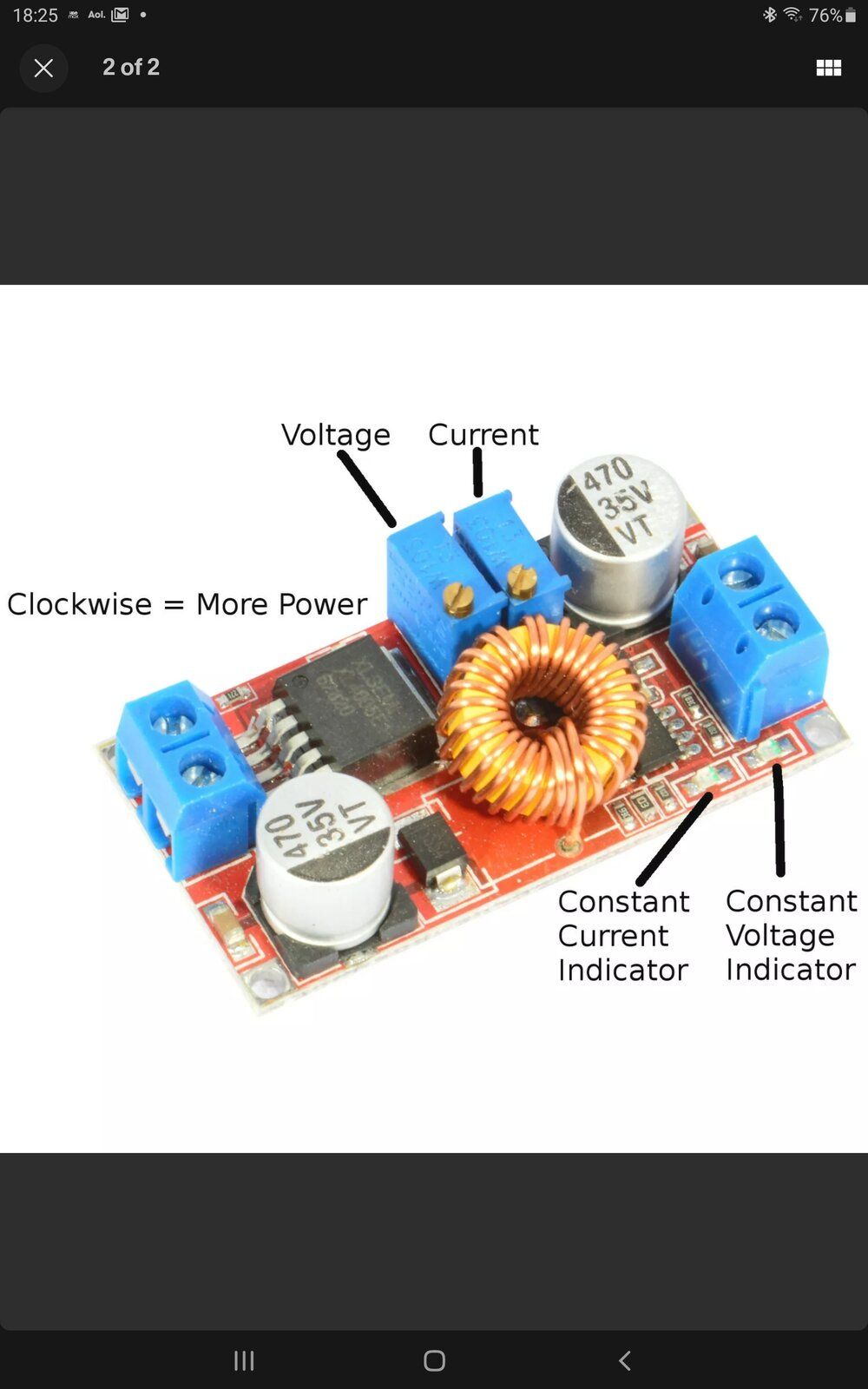 I have some progress...1st amp is completely done finally. I measured the voltage from the Aux output on the amp, and then set the voltage to the same on the DC power supply I bought. I then hooked up the Buck down board and hooked up my multimeter to the iutput and dialed the voltage down to 3.08v.. I then turned the current down (no idea how much as I could not measure it). I soldered a 10k ohm resistor to the LED, I had a friend cut some phenolic for me so I could hot glue them to the case and hot glue the Buck down boards to them. I then dressed up the wires and powered it up and it is fine. Over the next week I will be building 2 more amps, plus the 6 channel amp (which I will also hook up LEDs and possibly redress it up too).

Today I wired up the first of the high frequency amps with a LED. This time I went with it running directly off of the 5v tap instead of using a buckdown convertor and the 25v tap. Much cleaner and easier to do as I was able to use a slower resistor and still be dimmer. I hope to get the other 8 done in the next week. I will post up some more updated pics next week.
Last edited: Oct 10, 2021

Yep... and when exactly did you say you were going to start selling these... as I assume staff members get a pretty good discount right?

Sonnie said:
Yep... and when exactly did you say you were going to start selling these... as I assume staff members get a pretty good discount right?
Click to expand...

ROFL I do appreciate the complements, but I am sure if I can build these anyone could build one as nice or nicer. The big case cost me $400 by the time I got it to Mexico from China (17% duty plus a $1 a pound, and the case alone weighs 30 kilos shipped). The smaller cases I think were under $100 to my door I might be able to fit 2 amp modules in it, but it would be tight. If the heat sinks were taller I could have 3 amp modules.
I still have another big amp case minus the rack mount handles that I want to make into a media server with a bunch of 10TB USB HDDs and maybe a Intel NUC.

BTW it still takes me a couple of hours to wire just one LED, due to my lack of experience soldering.

I hate soldering myself... at least you have a good practice now.

Main problem is keeping my hand from shaking and seeing where the LED wires are.

What a great project! Man, you're a genius!

PaulSmt said:
What a great project! Man, you're a genius!
Click to expand...

It really is not hard at all...you can buy the cases sometimes and they will predrill and tap to your specs. Once you get that done you just buy the amp modules, power buttons, LEDs, and wiring. Then you just take your time and assemble. The DIY Forum is a great place to ask questions on your project.
You must log in or register to reply here.
Share:
Facebook Twitter Reddit Pinterest Tumblr WhatsApp Email Link