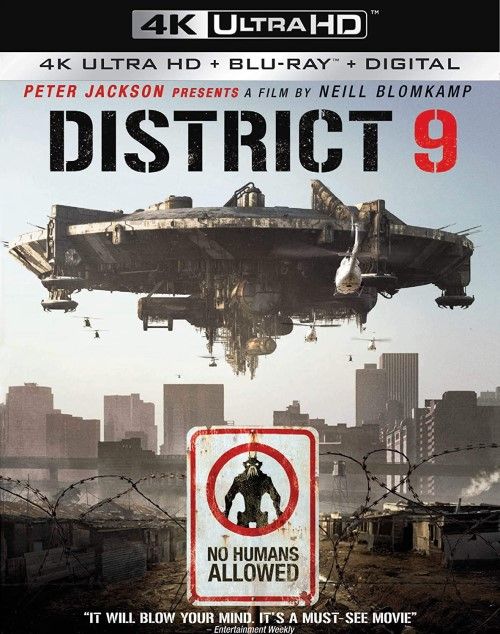 Movie
District 9 marks the 1st of South African director/writer Neill Blomkamp’s “trilogy” of films about oppression and the fight for survival, and arguably his best one at that. Elysium went off the rails with social justice dogma, while Chappie was so bizarrely entertaining that I can’t help but love. But at the end of the day District 9 is probably his most thought out, most raw, and most accessible film to the general public. It’s also incredibly relevant to our daily news the last few years, as the discussion of refugees and treatment of refugees has been something of a political hot spot the world over. Blomkamp makes it a film of dichotomies, blending in a typical sci-fi story of evil antagonists and heroic protagonists, but uses that as a shell for a deeper story. A story of depressing realities, and the harsh knowledge that humankind has been oppressing others in some way, somewhere, since t he beginning of time. It’s dark, brutal, and asks more questions than it answers. A move which is highly intentional by Blomkamp as it gives room to think and ponder the things we see (and sometimes refuse to see) in our own society.

The film takes place with a bit of an alternate history. Back in 1982 an alien space craft drops into atmosphere just above Johannesburg, South Africa, leaving the world in wonder about what has just invaded them. However, the ship is completely immobile (theorized because a command module for the fell out during it’s descent) and a bevy of starving alien beings that have been nicknamed “Prawns” (due to them looking kind of like prawns) are found on the ground underneath the ship. After of course trying to figure out a way INTO the space ship, the South African government and a private military organization titled the MNU have cordoned off the alien survivors into a slum known as “District 9”.

Humans and aliens haven’t gotten along that well together, and the growing anti-alien sentiment has forced the MNU to create “camps” for the already suffering aliens OUTSIDE of Johannesburg city limits (200 km according to our main “hero”) and evict them by force. Leading this charge by the MNU is one Wikus Van De Merwe (Sharlto Copley), who has just been promoted for this assignment. A pencil pusher and public relations expert, Wikus spearheads the private military operation to sweep up the aliens and get rid of them. Unfortunately for him he gets sprayed by a mysterious fluid found in one of the Prawn’s hovels which starts a chain reaction where he starts to morph into one of the Prawns himself. Desperate to find a way out of his situation, Wikus runs from the knives and experiments of the MNU and seeks refuge in District 9 and befriends a prawn named Christopher, who offers the chance of being healed if Wikus will help THEM get back up to the command ship. Something that they have been trying to do for 20+ years.

District 9 is a fascinating film about oppression and social morays. Blomkamp is coming from a point of apartheid and racial tensions that have been brewing in South Africa for DECADES, but it also spills over into today’s discussions about illegal immigrants and war refugees from the Middle East that we are dealing with over a decade past the film’s creation point. It’s terrifying, nasty, brutal, and yet heartwarming and touching at the same time. Blomkamp uses a documentary style of film making to tell his tale, and it works rather effectively. Especially as it allows the viewer to travel along to many different locations without having to hear tons of villain exposition. We see everything from Wikus’s point of view, and his interactions with those around him shape the final brutal conflict. Interestingly enough, Blomkamp isn’t really laying blame at anyone’s feet. He’s not trying to make a disaster alien movie, but rather paint a much more intimate portrayal of two classes of being at odds DUE to their innate differences and the conflicts and fear that arises as a result.

If you know the visual stylings of District 9 you’d be wondering how much of an improvement that the 4K UHD would provide. I mean, this isn’t exactly Cloverfield level filming, but District 9 uses a mixture of handheld digital cameras, shaky cam, traditional character shots with higher end digital cameras, and a variety of other “news reel” like shooting styles to create a documentary look and texture to the movie. The film was supposedly shot using 4K cameras, but then finished with a 2K master due to the amount of digital editing that needed to be done on it (which was typical back in 2009). However, the end result is actually really nice. I was fully expecting a very minimal upgrade over the Blu-ray at best, but ended up being pleasantly surprised. The digital cameras provide a very clear and sharp looking picture for the most part, with the only exceptions being the shaky handicam footage. There’s some artifacts baked into the master due to the style of cameras, but the more traditional character shots show startling clarity. There’s some digital noise in a few shots, but overall this is an EXCELLENT transfer.

One of the biggest boosts this disc gets over the 1080p Blu-ray is the HDR grading. Not only do we get the red vest from Christopher popping more, or the bursts of CGI blood being sharper, but we also get better white levels and better black levels. Notice the opening scrawl with the descriptions of the alien “invasion”. The blacks are much better presented, and the coloring on the writing is more crisp and vibrant. The outdoor shots are drenched in hot South African sunlight, and the tweaked highlights and white levels makes for a very visually appealing picture. The washed out look of the original Blu-ray is much more defined here, and the whites don’t blast out detail at all. The image of the disc will always be very stylistic and “different” by nature, but the 4K UHD disc does a great job fine tuning and enhancing the already good Blu-ray.

District 9 already had a great 5.1 DTS-HD MA track back in 2009, but the Dolby Atmos track expands and fine tunes it a bit. The center core of the mix is still there, with crushing low end bass and wildly active surround usage. Gun fire rips through the sound stage, as does the roaring and rumbling of the space craft when it takes off, or the guttural sound of military vehicles. The clicking and clacking of the Prawns language is tactile and precise, while the background hum of Nigerian criminals murmur in the background. However, the soundstage is definitely opened up, as you can hear the hum of the space craft ripple overhead, or the swell of the score in the overheads. The surround noises can shift directions a little bit more with the added channels, and sounds slightly more nimble when shifting positions. Again, a great track was already on the Blu-ray, but this Atmos mix puts it over the edge to perfection.

District 9 is a great film, but not one I would have suspected would have made a great 4K disc though. That being said, Sony has done what they usually do and released a stellar disc that defies expectations. The 4K upgrade is very impressive, and the film itself is surprisingly relative to our society today, especially with all the talks of refugees and borders that has been in the news the last 3 years or so. We even get a few new extras as well instead of just porting over the legacy ones. Definitely highly recommended.

Thanks for the review. I agree, this is a great movie to have. The visuals alone are worth seeing.
N

this was my go to bluray for picture quality so hearing u say the 4K brings more to it is really great to hear. should get it in the mail today. thanks!

I need to stop reading your reviews!

Hmmm I am not sure I have seen this movie.

I shall remedy that post haste.
Thank You Michael

Thanks Ralph. It's been a low key favorite of mine and I totally agree with your review as well. great flick, great 4K UHD

Thanks for the review Mike. I’ll be picking this up.