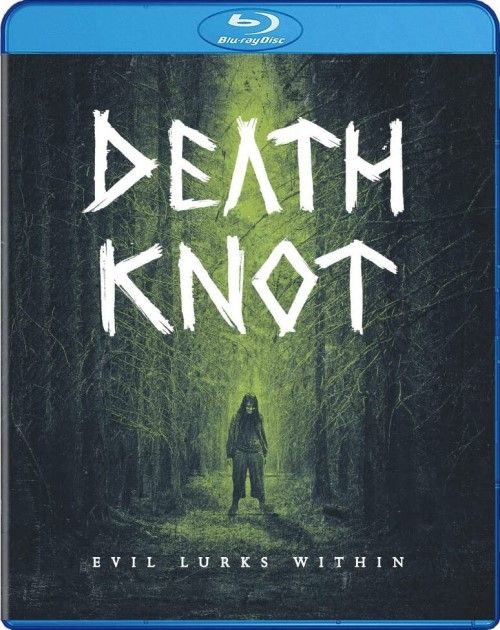 Movie
The good ole “possession” style horror flick has been a staple of the genre for about as long as I can remember. The Exorcist, The Possession (easy title there) and many others have long since told the tales of evil spirits possessing the bodies of unlucky normies and the havoc that they wreak. The Asian market has been rife with them for almost as long as Hollywood has, with massive hits like Ju-On and the like. However, color me a little curious when I notice that Well Go USA’s Death Knot is an Indonesian film instead of the typical Japanese, South Korean, or Chinese as the source. Indonesia doesn’t have a massive hold in the Asian cinematic world, and that alone had me curious about Death Knot.

Written, directed and actually showing up IN the movie, Cornelio Sunny’s story is pretty typical. Hari (Cornelio Sunny) and his sister Eka (Widka Sidmore) are coming back to their childhood home after the apparent suicide of their mother. It seems that the mother was not highly regarded by the community, as they shunned her being a Shaman of sorts, and viewed her death as a relief from possible evil spirits. Not to be dissuaded by petty redneck superstition, Hari and Eka stick around for the funeral and look about what they can do about the estate that’s left over. However, as time goes on the two start to realize that something evil might be actually attached to their family. Both brother and sister both have the same dream about their mother begging them to leave before committing suicide in front of their eyes, and soon people around them randomly start hanging themselves for no reason. The more the duo look into their past, the more it becomes obvious that something evil is luring them closer and closer to their demise.

Death Knot is a mixture of good and bad. On the positive side the film is just oozing with atmosphere. Cornelio Sunny doesn’t really use jump scares at all for his film, but instead uses shifting camera angles and a deeply disturbing forest look that just drips with creepiness. Not to mention he goes straight for the jugular in terms of of the evil nature of the possessing demon. However, the film also has a few major flaws as well. The plot is pretty rote and pretty tame for long time horror fans. Nothing new is really introduced or developed, but just a straight forward demon possession film that has a rather abrupt and mediocre ending. It’s not bad, it just simply can’t seem to really be anything special.

That being said, what makes the film special is that Indonesian films are NOT known for being very high quality, and Death Knot actually breaks that mold by being a rather well produced and acted film. Death Knot won’t win any awards or stats among cult horror fans, but the flick is competently directed and acted, and looks like it’s shot with good equipment (unlike the few Indonesian films I’ve seen to date). Again, nothing special but a surprising amount of visual and story quality nonetheless.

As is the case with most of the Well Go USA titles we don’t have a lot of information on what cameras were used and what resolution master was used for the home video release. My best guess would be some sort of digital cameras with a 2K master, but that’s only a hazarded guess based off of visual look of the film. The 1.85:1 AVC encoded transfer is pretty solid, with a rather sharp look to the blue/green tinged look of the movie. Nuanced fine details are easy to pick up on faces and clothing. However, the woodsy material is rather rough to look at sometimes, with lots of banding and mushy looking blacks. The banding can almost blur and smooth out some shots to the point of irritation, but luckily these moments are not even a moderate percentage of the runtime, so it doesn’t give too big a strike to the image. All around good for the most part though.

The 5.1 Indonesian DTS-HD MA track fares about as well as the video does. The track has good dialog (although there are a few muted moments and some slight thinness to a few bits of vocals) and a decent bit of surround activity. There’s plenty of wooden “ticks” going on that reverberate around the room, and the bass certainly kicks into high gear with a jump scare moments. However, I’d say most of the ambiance and heavy activity comes from the score, which is a wonderfully atmospheric bit of music (and interestingly enough, switches to a metal track for the end credits, even though it’s mostly Asian influenced for the rest of the movie).

I’m a horror junkie to the core, and while I love the genre, I’ve sort of become numb and jaded to the sheer amount of garbage that comes across my review desk. Luckily Death Knot isn’t a bad movie, but sadly it isn’t enough to really get past my jaded view of “been there, done that” with this Indonesian horror flicks. It has a few good moments and some interesting photography, but at the end of the day Death Knot feels just a bit too generic to heartily recommend. Instead I give it a decent rental rating for those who want to enjoy a slightly different take on the age old “possession” sub genre of horror. Rental in my opinion.

I may watch this one. Interesting how the cover for Cloverfield and this one look almost identical. Thanks for the review.

Asere said:
I may watch this one. Interesting how the cover for Cloverfield and this one look almost identical. Thanks for the review.
Click to expand...

it's more interesting than I would have thought. Not perfect, but rather fun

I've seen some films from Indonesia like Satan's Slaves and Impetigore that were pretty good.

wow, I forgot about "Satan's Slaves"... I haven't seen Impetigore though. Might have to check it out

Have you seen the 1981 Possession film with Sam Neill?
I did a blind buy because it was restored but now it is on Shudder same for Impetigo.

not in many many years