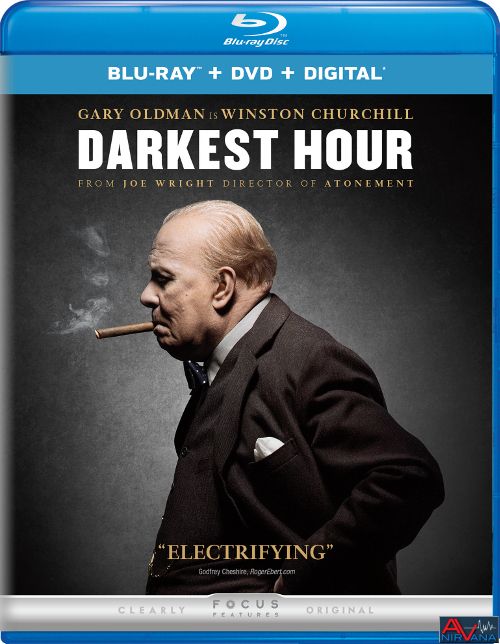 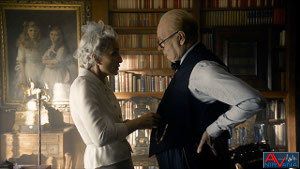 Movie
Winston Churchill is a man that you either loathe, or a man you love. He had some weird ideological issues that cause me to both respect and despise the man’s actions, NO ONE can deny how pivotal he was in the survival of the Allies during World War II, and his complete revolutionizing of the use of words to give hope and reinforce the human will like he was able to do during those bleak hours. I find it amusing that we were given TWO films that happen during the same short time period of the last World War in such short succession. Darkest Hour happens just days before, and acts as the buildup, for what would become known as Operation Dynamo. Otherwise known as the events of Christopher Nolan’s Dunkirk and the rescue of 300,000 soldiers from the beaches of France. However, this delves into the political issues that Churchill faced leading up to those events, and are seen through his aging eyes as he battle parliament, instead of scene through the eyes of the soldiers on the beach, ala Nolan’s masterpiece.

We’re thrown right into the center of the conflict, with members of Parliament calling for the resignation of Neville Chamberlain (Ronald Pickup) after his constant appeasement of Hitler has left the entire body looking for someone who could lead the nation in a time of crisis (preferably someone with a backbone). With Chamberlain stepping down, the house is looking for someone new to lead, and there are only two choices. The first being Viscount Halifax (Stephen Dillaine), a personal friend of King George VI (Ben Mendelsohn). And the second being a brutish bulldog of a man (both in personality as well as physical appearance) who just so happened to be the only person the more conservative wing of Parliament was willing to accept. Winston Leonard Spencer Churchill (Gary Oldman).

Following his quick admission as Prime Minister of England, Churchill didn’t just start kicking butt and taking names. His ascension was short and sweet, but also plagued with many MANY detractors, as the man had made copious political enemies during his career due to his brash personality and several political faux pas. However, Churchill was nothing if not a cagey individual. Keeping his enemies VERY close, Winston created a war council that consisted of Neville Chamberlain, Viscount Halifax, and several other political rivals in an effort to mend bridges, but also to keep them right under his thumb. As much as he wanted to lead his country into a war of survival (Winston was famously bullheaded about giving no quarter, as he firmly believed there was no mercy in Hitler. A belief that was proven right many a time), he was hindered at every turn by Chamberlain and Halifax’s pacifistic attempts at trying to find a peaceful surrender term to Hitler as his Luftwaffe and Panzer tanks came closer and closer to England itself. A move that made his attempts to keep England a free nation all that much harder as he strove to unite the nation under one mantra. “Victory at all costs”. 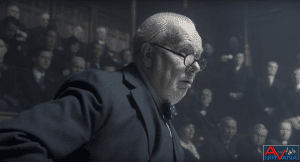 Darkest Hour takes place over the course of of the month of May (or the last 21 days of the month of May), 1940, just as Hitler is spreading past his initial conquests and into France, Belgium and up to England’s door. While this is a “war” movie in some ways, it is not your typical war movie. And at the same time, it is not your typical biopic of Churchill. it’s a bit of a hybrid of the two, weaving elements of Biopic character elements into the story, but also infusing it with a sense of tension and dread as Churchill DESPERATELY tries to rally the nation. I honestly didn’t notice that an hour and a half of the 2 hour and 5 minute film had gone by until I happened to look at my clock, so engrossed in the film was I.

The movie clips along at a brisk pace, with humorous moments lightening the mood of a bleak time in England’s (and the world’s in reality) history. Lily James is adorably cute as Churchill’s secretary/personal assistant miss Layton, and Gary Oldman’s portrayal of the big man himself is just staggering. Some of the extras deal with how much of a transformation Gary Oldman had to do to pull this off, and the effort he put into it is mind blowing. An achievement that ranks up there as the role of a lifetime. I don’t care what your views on what Winston did or didn’t to, but Oldman absorbed himself so much into the role that you couldn’t distinguish where Gary ended and Winston began. It is that impeccable. As well, the movie would not be as good as it was without exemplary performances by all of the supporting cast, and they do a magnificent job. Ben Mendelsohn as King George VI is spot on (there is a scene near the end with an emotionally broken Churchill and the King that just makes the film), and Kristin Scott Thomas is never a letdown in any movie she’s in.

Rated PG-13 for some thematic material 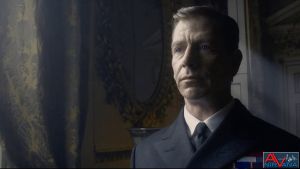 Darkest Hour was shot using the Arri Alexa cameras and finished using a 2K digital intermediate for the 1.85:1 framed home video release, and the results are splendid. The film IS highly stylized, employing several different color grading techniques depending on the scene. Much of the movie is shot in underground bunkers, or dimly lit meeting rooms which carries with a heavy yellow/green look that is steeped in subtle tones of earthy browns. The outdoor shots are much more natural, with bright colors, and overly hot white levels, giving it an almost “angelic” look. Others use soft blue tinges, such as when Winston is driving across the streets of London. Each one is unique, but equally resplendent with detail. Even in the deep dark recesses of his underground War Chamber, you can see every smoke puff from the man’s cigar, and every pore on his face. Clothing shows immaculate details to the naked eye, and I couldn’t see ANY signs of banding or black crush! Simply put, one of the best looking encodes I’ve seen recently. 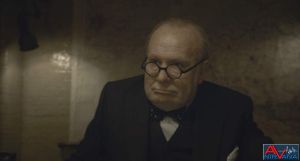 For a dramatic film I was a bit puzzled by the use of a Dolby Atmos track. I mean, it seemed like a bit overkill with the film being weighted heavily in the front of the room, but I was actually impressed with the dimensionality of the track. It IS true. Much of the film is spent in the main three “front” speakers, but the surrounds are used judiciously, with accompaniment scenes on the Parliament floor adding a 360 degree sense of immersion, as the Lord’s roar their approval at his famous “We’ll fight on the beaches!” speech. The overheads also get a bit of an oomph with the sounds of bombs dropping over France, or the rumble of aircraft going by. LFE is restrained, but also guttural and powerful, adding weight to said bomb’s dropping as well as filling out the tense score by Dario Marianelli.

• Into Darkest Hour – A comprehensive overview of all that went into making this epic wartime drama, including how they maintained authenticity in depicting 1940's London.
• Gary Oldman: Becoming Churchill – Filmmakers, cast, and crew marvel at Gary Oldman's layered, transformative performance. Oldman himself weighs in on the greatest challenges of portraying a man as iconic and complicated as Winston Churchill.
• Feature commentary with Director Joe Wright

Darkest Hour showed promise from the trailer, and the word of mouth was good, but I really didn’t expect it to be THIS fantastic going in. A dramatic movie about Winston Churchill is a fascinating subject, especially during this portion of his life, but I really wasn’t sure how Gary Oldman would do. He certainly LOOKED the part of Churchill, but how would the normally “over the top” actor do in a role like this? Luckily my fears were assuaged very quickly and the film turned out to be the single best movie I have watched this week, beating out even Pixar’s hit Coco. Audio is amazing, and video is picture perfect, with the ONLY thing that is left a bit wanting being a fairly middle of the road array of extras. Highly recommended.

Thanks for the review. I am very interested in checking this one out.

I remembered watching the 2009 and 2002 Churchill movies and thought they were very well made. Just curious.

sadly I haven't see those yet.

You are in luck if you have amazon prime.. Both are available.

Click here for prime video to watch HBO "Into the Storm"

Click here for prime video to watch "The Gathering Storm"