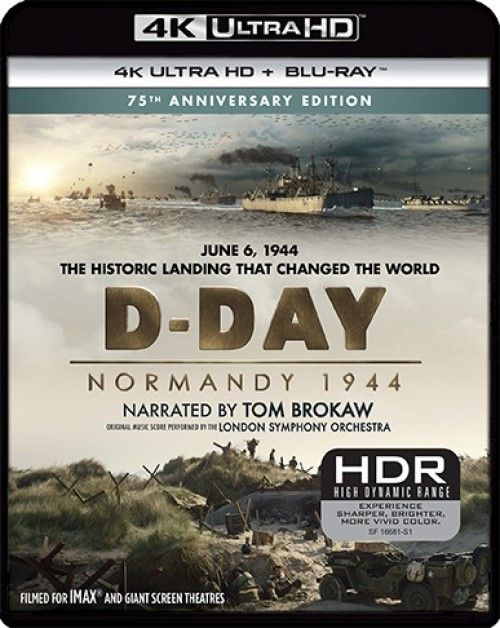 Movie
I was actually think a month or so ago that it had been a long time since we had seen a 4K IMAX documentary from Shout Factory, and then we got the press release for this little bugger, only for the initial mailing of the title from Shout Factory be delayed a little bit due to the Covid-19 lock down. Well, now it’s time to dig in once more and check out what visual and audio goodies that we have in store.

For those who haven’t kept up, Shout Factory has been diligent at partnering with the IMAX documentaries that have been released over the last few years, as they allow for a fun little 45 minute (roughly, some shorter, some longer) introductory look at whatever subject material is at hand. They’re not intended to be some some 3 hour documentary ripe with tons and tons of knowledge, but fun little entertainment pieces that act as introductory eye candy pieces to get the person into the subject matter and allowing them to dig deeper with other sources. The combination of IMAX footage and short but sweet run times makes these easy to digest, gorgeous to look at, and act as little background demo films for company when you’re watched them a few times.

Director Pascal Vuong actually made this film about 6 years ago, and it was a life long passion for him. According to the interviews on this disc he was inspired by the film The Longest Day, and wanted to do a history piece on that time period, but was stymied by some obvious constraints. First and foremost, utilizing IMAX photography and WWII archival footage was going to be tricky due to degraded source material, and of course the struggle to put such a subject matter onto a sub hour long disc. Luckily the world of 3D was going full swing back in 2014 and that was the major attractant for the film’s production, allowing Vuong to create his film, but sadly the 3D version of the film isn’t anywhere on the Shout Factory combo pack (which isn’t surprising to me personally, unless a director REALLY wants 3D on the home video format, it’s dead on arrival as even the biggest of studios haven’t put out a 3D Blu-ray in quite a while.).

As with all these IMAX documentaries, I’ll keep it short and sweet due to the truncated 43 minute runtime. The little documentary focuses in on the D-Day invasion itself, giving us digital recreations of the battle plans and attack structure, as well as some modern live action re-imaginings of what happened (plus a smattering of old still photos gussied up for the big screen). It’s a fun and exciting little jaunt, and like expected, not meant to be a major dissection of the battle. Instead we get the highlights and filled in the visual gaps with some digital trickery and stunning live action recreations.

Rated G for General Audiences by the MPAA

I’m almost nonchalantly bored with how stunning the 4K UHD disc is (and the included Blu-ray) here. I’m just not surprised that this is pure 5/5 rated demo material, as that’s been the status quo for these IMAX documentaries. It’s pure gorgeous, drool worthy, material as there’s not a lot of archival footage to mar up the modern look to it. I also noticed that this was the first time (to my immediate knowledge) that Shout Factory hasn’t given an option to view the 4K UHD image in SDR, but instead only including an HDR encode here (not a bad thing really, 4K TV’s are so common nowadays that a non HDR 4K TV is pretty stinking rare). With the inclusion of live action recreations and CGI material we’re given a STUNNING image to look at in 1.78:1 framing. The live action bits are amazingly recreated with fantastic highlights and picture perfect detail, while the CGI elements are as sharp and clean as can be. End of the day, this is pure demo worthy material and another IMAX treat to drool over.

I was a little bit surprised that there was no Atmos track on the disc, and actually dug around on the disc to make sure it wasn’t mislabled. Not that the 5.1 DTS-HD MA track is lacking in any ways, but that it was pretty much a staple for the 4K UHD IMAX doc’s that Shout has pumped out over the years. But as I said, the 5.1 track is NOT lacking in any way. It’s show stopper from beginning to end, mixing in gunfire, cannon shots, and the roaring of shells through the air along with the metered pacing of Tom Brokaw’s narration. There’s not a problem in the mix outside of the fact that when the simulated action is quieted down, the front heavy mix saps some of the surround intensive moments away and we’re left with a basic dialog heavy track.

Like most of the 45 (ish) minute IMAX documentaries that Shout Factory has put out, you’re not going to be delving very deep. It’s a 43 minute visual treat with some basic information about the subject matter, and doesn’t try to advertise itself as anything other than that. It’s great to use as demo material for your home theater, or background noise for a get together with friends, but it’s never going to be something that’s massively intellectual or deep. Still, if you’ve watched these 4K documentaries from Shout so far, you know exactly what you’re going to get. The audio and video are mind blowing, and the extras have some decent tidbits in them as well. Good watch for those of you who have seen the previous ones in this series.