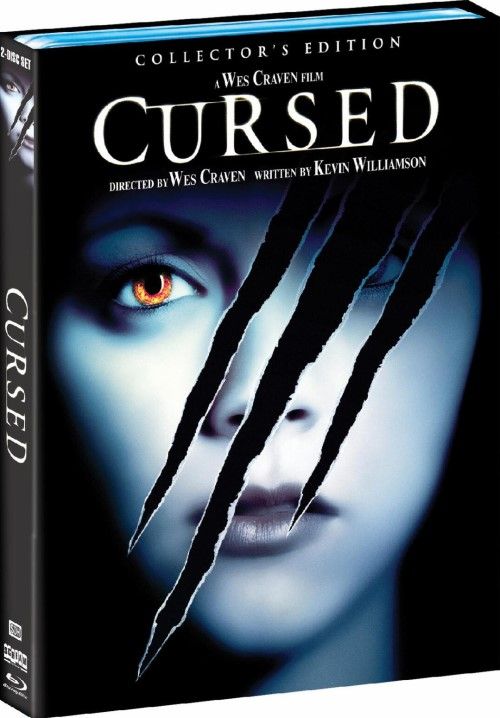 Movie
Ahhh, Cursed, 2005’s Wes Craven debacle that could literally be put on the pedestal of Cutthroat Island and Waterworld for behind the scenes nightmare that turned the legendary director into a laughing stock, and then raised the film into cult movie status. Taking elements of Silver Bullet, Teen Wolf, Mean Girls and the flair that made Wes Craven a legend and putting them into the blender and hit frapee. While the movie is one of those deliciously guilty pleasures (emphasis on guilty), the Blu-ray release has always been severely lacking. Outside of the DVD, the unrated cut has never seen the light of day on HD, and the Blu-ray we DID get was an Echo Bridge compression job (which actually wasn’t too bad if I remember correctly) back in 2012 that got pushed around in various forms over the year (a 6 film collection, a duo with They and a triple feature including one of the Halloween films) in ONLY the PG-13 release, and then it just went radio silent when nobody else wanted to pick up Miramax’s back catalog. Now it’s out on in a nice new shiny Blu-ray collector’s edition, with brand new extras, a 4K scan for the new master, the theatrical and unrated cuts (which get their own disc), as well as snazzy new slipcovers and artwork.

Cursed was the poster child for the early 2000’s mishandling of horror. The 80s was the king of Craven, but then the 90s came with it’s own bizarre horror mashups (back to the supernatural in a post slasher world) and the early 2000s where everything fell apart. No one can ever say how good Cursed COULD have been, but it was such a cluster bomb behind the scenes that we probably will never even get a glimpse. The film actually started out with nearly all new actors, but with studio disagreements with Craven came a huge hubbub from up high, and just before release the film was entirely reshot with a lot of new actors in various roles, completely different scripting, and from what Craven has said over the years, a movie that doesn’t even resemble what he originally tried to create.

In 2005 this was the “who’s who” of upcoming big name actors (and some fading ones). Literally 2 years after Dawson’s Creek (and 3 years before Fringe) we get a bearded Joshua Jackson as a literal playboy trying to woo publicist Ellie (Christina Ricci), who is having a hard time dealing with the former heart throb. However, things get a bit more “complicated” when Ellie and her younger brother Jimmy (a baby faced Jesse Eisenberg) get into an accident and get bitten by what Jimmy describes as a werewolf. Not willing to face the truth at first, Ellie and Jimmy slowly realize that they are changing day by day. To make matters worse the third werewolf is still out there killing people, and it may be their powers that allow them to find and destroy their maker.

Cursed is not a bad film, but it’s a labored one that has several differing tones throughout. The first 2/3rds of the movie plays out like a dramatic dark rom-com with Ellie and Jake (Joshua Jackson) traversing what is obviously a toxic relationship, with Jimmy’s burgeoning powers playing out like Teen Wolf as he becomes a big man on campus after being bullied by the likes of Bo (Milo Ventimiglia pre Heroes). However, when the film transitions to Jake’s nightclub for the 3rd and final act, it sort of finds it’s groove, blending Mean Girls with a horrific and bloody werewolf movie. It’s goofy, awful, funny, and completely early 2000s. In fact, being that I grew up the same age as the actors, I can literally remember watching this theatrically in my very early 20s, and see all of the lingo, the interactions, and stupid young adult things that made this movie so cringe worthily hilarious.

The film likes to play cheeky throughout, and instead of hiding who the identity of the third werewolf (and the master who started all this), it literally dangles EVERYONE possible in front of the audience, teasing us with the possibility that they might be the vicious wolf in human form. After a while it becomes part of the groove and theme, shoving one more person into the limelight for us to guess their identity as the monster, only for them to get slaughtered by the real beast until the big reveal (well, one big reveal. The werewolf who turned them is a bit of a surprise, but the “master” was so obvious no one in their right mind could miss it).

The film comes with both the theatrical cut that was butchered down to a PG-13 rating of 97 minutes and a few seconds, but also includes the Unrated Cut that we got with the DVD back in the day, that adds 140 seconds (ish) of gore and language to fit into the R-rated theme of Wes Craven’s typical horror entries. It’s not the film that Wes envisioned, but those few minutes of gore really add that lemon twist that the PG-13 cut was lacking. Well, that and add in a couple extra dodgy CGI shots that make you visibly wince (seriously, the previous year’s Underworld looks leagues better in the wolf department, especially the final battle in the club which just shows how weak 2005 CGI was back then, and why practical effects would have been a better option).

It’s been a while since I’ve seen the Echo Bridge Blu-ray release, but the new 4K scan that Scream Factory pulled out is a great looking image. Just on the cusp of 35mm photography getting scrapped for digital, Cursed looks incredibly filmic and richly layered throughout. Like early 2000s and late 90s movies, it has a slightly ruddy push to skin tones, with blue and amber overtones to the image. Details look scrumptious most of the time, although there’s a few scenes in the nightclub and in Ellie’s home near the end that definitely show some black crush. Flickers of banding are seen in the night sky, but overall this is a really nice looking image that may not be RAZOR sharp, but is still incredibly well detailed and looks better than I’ve ever seen it. Both the Theatrical and the Unrated disc looks pretty much the same, although I could SWEAR the theatrical cut looks just a tad more red.

As with most Scream Factory releases, Cursed gets a 5.1 DTS-HD MA lossless track as well as a down mixed 2.0 DTS-HD MA track for night listening. The 5.1 track is punchy and VERY bassy, with a lot of the action in the latter half really slamming you in the chest with that low end. Dialog is well defined and intelligible at all times, and the surround usage during the latter half is fantastic, especially in the night club with guns going off, screaming everywhere and bodies slamming into the wall. One thing I DID notice is that the dynamic range between the dialog and the effects could be rather wide. Almost too wide in some cases. Voices are perfect one moment, and then an action effect literally kicks you in the chest and blasts your ears. Not a huge thing as it’s not so massive a range to be problematic, but personally I felt the effects could have been dialed down JUST slightly, as I had to turn it down just a tad to make sure the effects didn’t overwhelm the sound stage, making the dialog a hair quiet (a 2 DB push on the center channel fixes that just to let anyone know who wants to manually balance it a tad). All in all, a very good mix with just one minor quirk.

Theatrical Cut
• NEW 4K scan of the original camera negative
• NEW A Sheep in Wolf’s Clothing – an interview with actor Derek Mears
• NEW A Movie That Lives Up To Its Title – an interview with editor Patrick Lussier
• Behind the Fangs: The Making of CURSED
• The CURSED effects
• Becoming a Werewolf
• Creature Editing 101
• Theatrical Trailer

Cursed is an awesome bit of early 2000s werewolf cheese. It’s not going to rival the big boys like The Howling, Silver Bullet, or even action werewolf movies like Underworld. Instead it is a gloriously cheesy and hammy bit of post production nightmare that actually is a whole lot of fun if you just go with the groove. The new Blu-ray looks way better than the old Echo Bridge disc, and the audio getting a lossless boost is much appreciated. The new extras give a lot of insight into all the troubles behind the scenes for those interested, and the classic cover art in blue is perfect. Great buy for the cult classic fans.