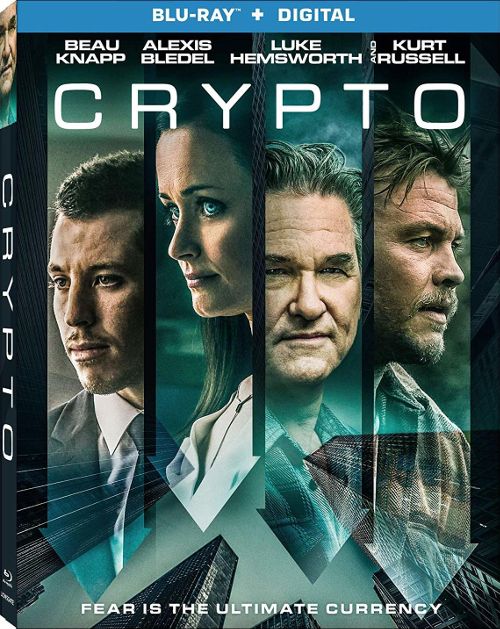 Movie
Crypto Currency has been all the rage lately. Most people don’t know jack about it besides that you have to “mine” it, and that it officially sent the video card market into a bubble that would make the housing bubble of 2007 look like child’s play. Needless to say it has become the new “net boogeyman” as the powers that be make it this uber elite, uber secure form of banking that is utterly anonymous (which is amusingly the exact OPPOSITE of what it really is) where one can hid their money and track about on the “dark web” (another misnomer that is crammed into every tech film these days). The crypto thriller, or crypto “Heist” genre has been taking off lately, and it was only a matter of time before someone decided to remake Oliver Stone’s Wall Street, but with Crypto currency instead of stock markets and bank trades. Well, sadly it was done on a much smaller scale, as Crypto’s director John Stalberg Jr. hams things up with a rather bland and generic script, and starring a few lower level actors to make this intriguing, but ultimately bland thriller.

Martin (Beau Knapp) is a rather unique individual. Being on the “spectrum” (E.g. mildly autistic) he is a brilliant technical bloodhound, able to root out any digital trail of discrepancies at his home office of Omni Bank International. However, he has unfortunately turned his nose for errors on the wrong mucky mucks and gets himself exiled to upstate New York, where he has to audit a local branch in his home town. There he is forced to confront his past and reconcile with his PTSD ridden brother Caleb (Luke Hemsworth, the OTHER Hemsworth) and his stubborn father, Martin Sr. (Kurt Russell), and ends up ultimately uncovering a conspiracy of epic proportions.

Stumbling around in the bank’s archives he finds some discrepancies, and with the help of his crypto mining enthusiast childhood friend Earl (Jeremie Harris) he discovers an electronic trail back to a Russian money laundering scheme. What starts out as a money based thriller turns into your generic thriller, complete with mysterious murders that no one can solve, kidnappings, screaming at the camera, and general mayhem. The first part of the movie is a bit bland, but once Martin and Earl start doing their online sleuthing things get a bit more fun. Sadly the change of pace to a traditional thriller loses interest after a while, as the sleuthing was way more interesting than running around tying to make back yard deals and running away from Russian assassins.

Acting wise this had some potential. Beau Knapp (who’s been showing up in quite a few indie films recently with usually good results) is the only really interesting character in the film. He truly gives it his all as Martin, and you end up actually sympathizing and rooting for him. The rest of the sub plots and sub characters get stale fast, with only Kurt Russell making an ATTEMPT at being interesting. Sadly it’s not really his fault, as Russell is side lined for just two good scenes, while the rest of the time he’s just referenced. Luke Hemsworth hams it up to level 11, and Alexis Bledel gets the same treatment as Russell. She’s mostly side lined and only really given 2 scenes to develop any character.

The movie itself is NOT a bad movie, but sadly it is hamstrung by generic cliches and an overstuffed plot that has way too many sub plots for its own good. Beau Knapp is the standout from this Crypto Currency conspiracy theory (which spends way too many shots focused on lower face close ups for its own good) and I spent most of the time looking at my watch. I liked the idea of it almost cloning Wall Street, but the movie has very little “bite”, unlike it’s homage like idol.

Rated R for language throughout, some violence, sexuality and drug use 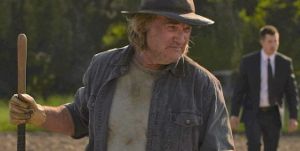 I couldn’t find any information on what cameras were used and what resolution the master was stuck at (I’d assume a digital shoot and a 2K master considering the budget and look of the movie though), but Crypto is a solid enough transfer that’s given the unique aspect ration of 2.66:1 (slightly odd aspect ratios are becoming more and more common these days). Crypto is given a very heavy teal color grading, with it pushing more towards the green end of teal most of the time. Certain shots inside Omni Bank, or at the farm looks more neutral (sometimes the farm looks very earthy and dusty brown though), but otherwise this is a VERY heavily color graded film in the blue/green department. Up close details are usually very very good, with plenty of facial details and good clarity, but the backgrounds and anything not DIRECTLY in the foreground is given a sort of gauzy and hazy look, which makes the entire image look a bit soft when you’re not focusing on the foreground. It’s a solid enough transfer with good blacks, and decent clarity, but the strange color grading and odd softness keeps it from being truly stellar.

The 5.1 DTS-HD MA track does the job as well, delivering satisfactory results for your average thriller. The score adds most of the real ambiance and action, as the rest of the time is spent staring at computers and talking about crypto currency. The score is a bit harsh and discordant by design, blending a bit of electronic squawk with the pulsating sounds of a thriller, making the viewer rather uncomfortable whenever the music really kicks in. The dialog is straight forward and clean, with a ton of the run time spent in the front three speakers when the score isn’t humming all around. It’s a good mix, with some solid LFE, but it’s never an overly ambitious track, doing exactly what is needed from it without ever really flexing any super impressive muscles.

Crypto is a moderately entertaining thriller about espionage and money laundering, but it really has a hard time standing out from the crowd. You can see the influences of Oliver Stone’s Wall Street throughout it, just twaked and modified to be for a more modern audience who is familiar with Bitcoin, and using the budget of your average DTV film. Beau Knapp does a solid enough job, but the rest of the cast (even Russell) is a bit underwhelming, and the plot line itself is annoyingly cliched and generic. The Blu-ray is solid enough, with good audio and decent video, and naturally the anemic extras one would expect from this budgeted film. Personally I’d put this into the low rental stage, as it’s not a BAAAAD movie per se, just not great.