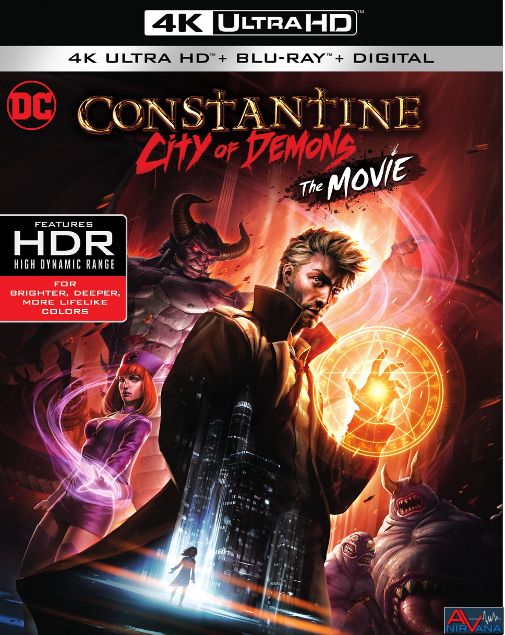 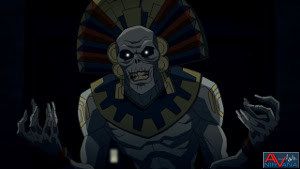 Movie
Poor John Constantine has a REALLY difficult time staying on the air. First there was the misconceived Keanu Reeves abortion over a decade ago, and then there was the great TV show a few years back, only for Fox to pull the plug on it. However, the good guy is fighting the good fight as he makes guest appearances (and seemingly a series regular next year) on Legends of Tomorrow, and he even had a co-starring role in DC’s animated film Justice League Dark (which was really a Constantine film that Warner didn’t feel confident enough in and just shoehorned it into a Justice League film to hopefully draw in a better fan base). Finally we have a CW seed show that seems to have been received well enough for the bean counters at Warner Brothers and DC to actually flesh out into a feature film (supposedly there’s 20 minutes of footage NOT found in the seed series). Either way, I’m just happy to have more Constantine at all, as he’s one of my favorite DC magical characters and a wickedly fun character that deserves his own spotlight.

Constantine: City of Demons is breath of fresh air in the Constantine saga, and probably one of the better stories told about him. I liked the Constantine series that was summarily axed, but it was a bit too “made for broadcast TV” for my liking. A Constantine film/series really needs to be dark, brutal and viciously violent if it’s every to emulate the comic books, and City of Demons does just that. Starring Matt Ryan (the same actor that played him in the series and on Legends of Tomorrow), the film takes its inspiration from the Hellblazer comic books and introduces us to the magician right off the bat in typical John Constantine fashion. Tortured, troubled, and cynically depressed, we come upon John as he is fighting his own internal demons (quite literally in this case), only to be interrupted by an old childhood friend named Chas Chandler. One of John’s closest and oldest friends (sometime in the past it seems), Chas has one request for his estranged buddy. Find out what has happened to his daughter who just won’t respond to any medical prompts and is stuck in a coma.

Thinking that it might be some sort of spell or what not, John goes in only to find out that it’s MUCH worse than he ever imagined. The little girl’s (Trish is her name) soul is completely missing from her body, and the only presence there is the remnants of a demon lord. A demon lord who seems to want to meet John, giving him a location to come and hash out the details. Upon arriving in Los Angeles (the location of the “calling card”), John and Chas find out exactly what drew them there. A demon lord who wants John to perform a few small tasks for him. Take out the demon’s competition in the city of angels, and he gives the girl back. Simple, right? Yeah, we all know how that usually goes. 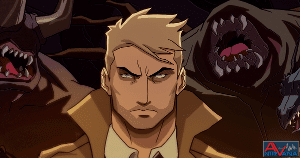 City of Demons plays out in typical John Constantine fashion, with the sarcastic and tortured sorcerer using some brutal (and inventive) ways to take out the demons opposing him. The series really DOES earn its R-rating, as the blood and gore level is through the roof (for a DC animated film). I’ll reiterate that this isn’t your normal DC fare, and parents really should be warned that this is a full on R-rated film, and one that gleefully goes as gory and gooey as many a horror film. Still, that’s actually part of the charm of John Constantine, and fans of the Hellblazer comics will get a lot of fun out of Matt Ryan’s portrayal of the iconic sorcerer. I won’t say that Matt Ryan has immortalized the performance, but the British actor gleefully has so much fun with the role both in his own series and on Legends of Tomorrow that you just can’t help but feel he fits right into the character in animated form as well.

There’s a few loose ends, and the ending leaves a LITTLE bit to be desired, but overall the movie is a fun ride for those of us who love the Constantine character. The movie is quickly paced, and while it doesn’t open up all the doors and characters of the universe, it introduces enough to become acquainted with the mood and tone of the series (I was sad to see no sign of his mystical mansion though). I had a blast with the gory flick, and really like that DC is not just playing R-rated for the sake of R-rated (kind of like some of the Batman universe R-rated flicks, where a few cuss words were added and that’s it), but actually makes use of the rating to introduce another facet of the more gruesome comic books into the mainstream. 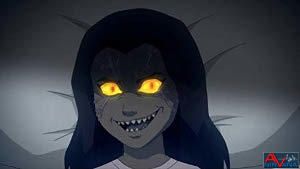 I’m actually surprised here. Usually the 4K UHD releases of the Warner/DC animated films have been VERY lackluster to say the least. The animation style and sources seem limited as I’ve never seen one look any better than the (usually) good 1080p discs. Well, I will say this upfront. Detail wise, this looks almost on par with the 1080p disc, as I don’t think there’s much more detail that can sucked out the source material. Facial textures, details on the line etc, they all look really good (the 1080p Blu-ray is near flawless), but I had to A/B both discs in order to see a difference in that department. HOWEVER, the use of HDR in the movie is where the differences stand out, and they’re actually pretty substantial. I don’t know whether the guys at the animation department are finally getting a clue on how to animate films that take advantage of HDR, or whether this film’s animation style lined up perfectly with the use of HDR, but either way, this was a rather nice use of it and one that benefits the film greatly. Most people think of HDR as only affecting bright colors, but one of the biggest advantages of the technology is how it affects black levels. Since City of Demons is such a dark film the Blu-ray has a hard time resolving figures in the darkness. Look at when Constantine summons the demon Nergal at the beginning, or when the 5 demons get trapped in the church. In the Blu-ray you can see shapes and figures in the background, but in the HDR enhanced 4K UHD disc you see MUCH more. Outlines are now fully fleshed out character designs, and you can see the armor on their body, or the individual animation lines IN the darkness! The colors themselves are really nice as well, and the neon soaked world of L.A. works well with those colors really popping off the screen. Despite the lack of extra detail levels from the Blu-ray to 4K disc comparison, City of Demons is a rather nice upgrade to the Blu-ray thanks to impeccable use of HDR and lack of crompression artifacts (banding is near nonexistent on the 4K UHD disc), making this the first of the WB/DC animated films that I actually recommend the 4K disc OVER the Blu-ray. 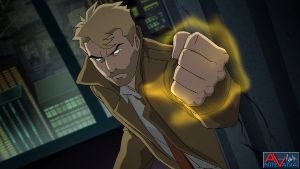 Constantine: City of Demons enjoys a bass heavy mix that is REALLY hefty on the low extensions, but is a bit front heavy in the sound design. Dialog and the main action of the film tend to stay way up front, with great panning effects and some good changes in directioanlity, but the surround sound usage is rather limited. When you do hear the surrounds its usually in regards to a door opening up behind you, or a car screeching up to a halt from the rear to the front. Otherwise the mains and the center get a majority of the heavy lifting. Well, that is outside of the bass department, as the LFE in the film’s mix is just punishing. Loud, aggressive, powerful and full of life, the LFE dominates much of the movie, laying down deep downbeats to the score as well as low rumbles to accompany the magical powers. 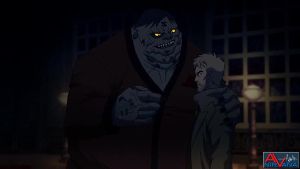 Constantine: City of Demons is probably the best of the CW seed shows show online. Vixen felt very choppy, and Freedom Fighters: The Ray was a bit sloppy as well. This is the first and only one that didn’t feel like you were watching 6 fifteen minute episodes instead of a cohesive film. For once it actually felt like a 90 minute movie. The film is tonally congruent with the Constantine TV show, as well as the Hellblazer comics. I haven’t read the City of Demons story that this comes from yet, but from what I gather it does the written art good in the translation. There’s a few plot holes here and there, and the finale between John and Nergal wraps things up a bit too nicely. Still, a well done animated film, and one that DEFINITELY earns its R-rating. Recommended (with the warning that this is not intended for children) as a fun watch.