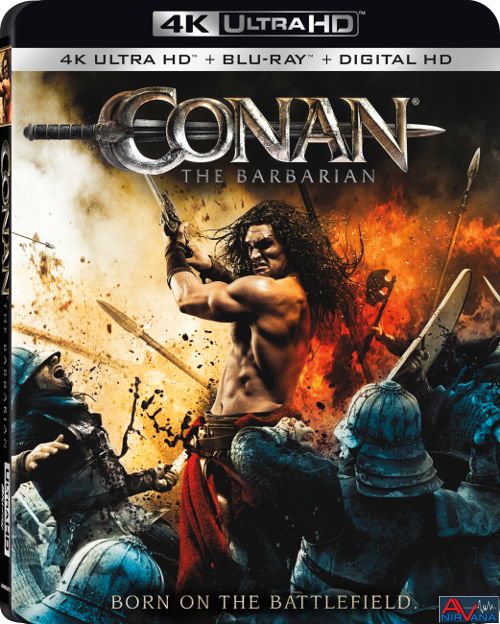 Remakes of classic films are a dime a dozen these days, and many of them are quite good. However, I don’t think ANYONE really wanted a remake of the fan favorite, Conan the Barbarian. Even though Arnold was a horrible actor back then, it is widely considered to be one of his most beloved films, and fans have been screaming for old Arnold to come back as King Conan for the last decade and a half at the very LEAST. Consider the fact that Jason Momoa is not exactly considered a great actor, and the trailer looking so incredibly weak, you can understand why the 2011 remake was met with very tepid results. I have to say that I really do enjoy the film though. The 2011 version of Conan will not even come CLOSE to the awesomeness that was the old 80s cheesefest with Arnold, but it is an entertaining sword and sandal film if you like blood, guts, magic, and Jason Momoa sneering at the camera while acting about as over the top as his limited scowling version of “acting” would allow him.

Back in 1982, Conan the Barbarian made a lasting impression on cinema as a whole. It really kick started Arnold’s career, and the dark take on sword and sorcery films was forever changed. It’s kind of hard to pull off a remake when you’re comparing yourself to a legendary film, and that’s exactly what Lionsgate’s 2011 rendition was up against. Trying to remake a cult classic, and doing so with sub par actors in the leads, as well as a rather CGI laden visual style. Now I really do appreciate the way that director Marcus Nispel turned the movie into a bloody good time, but it did so at the expense of an already established set of lore and legend, and did so over the complains of a whole host of fans. Now, don’t get me wrong. I really did like the movie AS A MOVIE, but I just couldn’t come to grips with the fact that this was a Conan film. Or at least SUPPOSED to be a Conan film.

We all know the basic legend, but here it is once again. Conan (Jason Momoa) is born on the battlefield to a band of barbarian Samarian warriors. His father is slaughtered in front of his eyes by a warlord named Zym (Stephen Lang) and left orphaned. Now years later his is the head of a group of freedom fighters who loot and pillage criminals, while eating drinking and being merry. That is until Conan spies one of the warriors who accompanied Zym in the slaughter of his family. Cutting and slashing his way through minions, Conan brings himself closer and closer to avenging his parents death. When he crosses paths with a young priestess named Tamara (Rachel Nichols) that he finally has a chance to strike the heart of the serpent. Zym is after her, as she is a descendant of a long line of Asheron priests, and the warlord (now king) is desperately seeking the last of her bloodline so that he can resurrect and ancient Asheron tome in order to rule over the world as did his ancestors of old.

Conan the Barbarian is a heavily flawed film. Acting is only mediocre, and Jason Momoa’s version of acting revolves around scowling at the camera and growling out his lines like an animal. I will say this though. His athleticism and physique really made the role intense. His action sequences with Zym were impressive to say the least, and the extremely athletic condition of the man led to some much better battle sequences than the other. Sadly, the script really falls apart as well. We have an amazing opening act with the Samarians (Ron Perlman is awesome as Conan’s father), but then the film comes to a screeching halt once we get to Conan searching for Zym. Then when we get into heat of the battle once more at Zym’s fortress, it falls apart once more. The whole Asheron mask thing is puzzling, as Zym finally gets what he wants, but the legendary mask that supposedly grants the person incredible power seems to be nothing but a modified face hugger (little Alien plug there) which doesn’t seem to boost Zym’s abilities of fighting whatsoever.

Rachel Nichols was a young actress, in terms of popularity, when she made this film, and her greenness shows in comparison to Continuum etc. Stephen Lang does his rough and tumble villain role well, but it’s really Rose McGowen who steals the show as Zym’s daughter, Marique. Rose had been out of the public spotlight for quite some time, but she jumped up for this one role and she was magnificently creepy as the witch daughter of the warlord. In short. Conan the Barbarian is an ok film, but just doesn’t really do much outside of a decent action movie, especially when trying to compare it to the originals (even Conan the Destroyer). A fun popcorn movie, but not much else.

Rated R for strong bloody violence, some sexuality and nudity

Conan is one of a long list of recent Lionsgate titles to get the 4K treatment, and it unfortunately is one of those titles that really doesn’t show that large of an upgrade from 1080p to 2160p. The HDR shows some nice tweaks to the sword and sandal film, mostly in the bright maroon of blood, or the blue seas as Conan and Tamara make their way to find Zym, but other than that there really isn’t that much difference between the Blu-ray and the 4K UHD disc. Fine detailing was AMAZING on the Blu-ray, and the 4K disc looks just as good, but you have to search really hard to see any upgrades in the actual visual details. Blacks are deep and inky, and down suffer from the crush that the Blu-ray had, but overall it’s a very mild improvement from format to format.

Lionsgate is known for their 7.1 DTS-HD MA tracks on Blu-ray (even if the theatrical mix was only 5.1 or lower), but for some reason they only put a 5.1 mix on the old Blu-ray and 3D discs. However, that track was a demo track back in 2011, and the upgrade from Dolby Atmos made me even more eager to check it out. The new Atmos mix is definitely more dynamic and fuller than the 5.1 mix. The use of the extra rears allows for more encompassing battle scenes, and the shifting directional ability of Atmos is used very nicely. The one thing that I really found a bit disappointing is the fact that the overheads are almost NEVER used, making this really a glorified 7.1 mix. I honestly don’t remember one time in the film where the overhead speakers were used, even with falling rocks and debris in the final battle. Honestly, this IS a better track than the 5.1 mix due to the increased immersiveness of the extra channels, but as an Atmos track is has some flaws.

• Two audio commentaries
• A history of the Conan franchise featurette
• The Man Who Would Be Conan: Robert E. Howard featurette
• Two additional featurettes on the action and fight scenes

I was one of the few people who actually liked the 2011 Conan the Barbarian for what it was, but the movie hasn’t aged well in the six short years it has been out. I still enjoy it as a mindless popcorn action flick, but the movie really has no right to be holding onto the legendary name of Conan in any way, share, or form. The movie is ridiculous, cheesy, and filled with worse acting than even Arnold pulled off in the 80s, but still worth it as a mindless action movie if you’re anything like me. Now as for the 4K UHD upgrade? Well, that’s a bit sticky. The extras are the same ported over extras from the Blu-ray, and the video upgrade is rather minimal. Even the audio mix is not really much different than the great 7.1 mix that the Blu-ray and 3D Blu-ray had. Thus it’s one of those situations where I would say it really depends on if you HAVE to have that ever so slight video upgrade. Otherwise I would just hang on to your cheap Blu-ray copies.