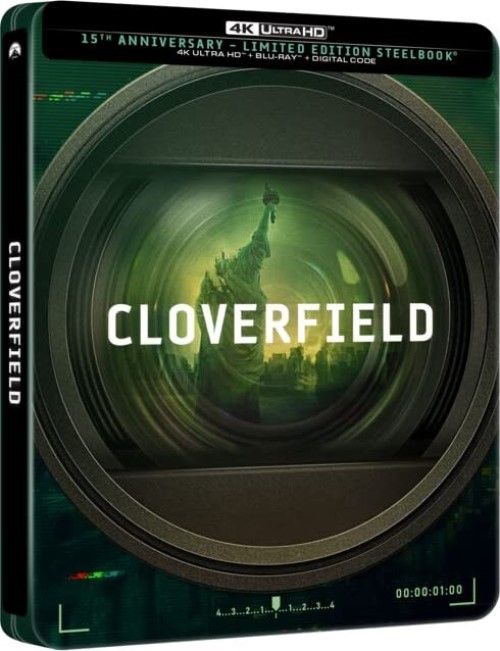 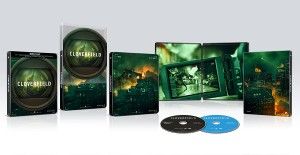 Movie
Let me start off this review by saying I HAAAAAAAAAATE found footage movies. They’re cheap looking, they rely on jump and startle moments to fill in the narrative because you can’t SEE what’s going on, and they’re usually low budget horror films. The Blair Witch Project was an interesting phenomenon at the tail end of the 20th century, and it started this craze of shaky first person camera vomit fests (literally, my sense of equilibrium goes haywire with these films and I get a distinctly physical queasy sensation watching them for long periods of time), and there are VERY few that I can actually watch without getting bored out of my skull. Cloverfield just happens to be one of them. I knew what I was going to be watching when it came out in 2008, but the marketing for the monster movie was just so stinking cool. The creators of the initial trailers made it looks so intense and so unique that I was actually rather intrigued when my two best friends drug me to the theater that summer. Color me really surprised when I found out that I was actually ENJOYING the monster movie, despite the shaky camera work and low budget cameras used to film the event. It’s not the GREATEST monster movie alive, but it is a unique take on the monster phenomenon, and does so in a way that keeps tensions high and doesn’t stop the roller coaster ride until the credits roll.

Cloverfield starts out a bit slowly. We’re introduced to the characters as T.J. Miller’s “Hud” character is forced to hold the camera for Rob’s (Michael Stahl David) farewell party. All we really know is that Hud isn’t exactly the most thought of fellows due to random red Marlena (Lizzy Caplan) griping about the decision. The idea to document the proceeding turns out to be a good one (at least from a narrative point of view for us lowly viewers) when disaster strikes Manhattan. “Something” attacks the city and the sounds of earth quake like slamming shakes the young people out of their loft. What they see is nothing short of chaos as people run screaming down the streets of Manhattan, followed by the gigantic head of the Statue of Liberty crashing into the street in front of them.

The gimmick of having a camera recording while a disaster strike is a hard one to swallow, but Hud answers the cries to put down the camera with “I need to document this, as people will want to know what happened” (paraphrased), and in that case he is NOT wrong. The film is herky jerky and excitable, but a wild ride from beginning to end as Rob, Hud, Jason, Marlena and Jason’s girlfriend Lily all run for their lives as gigantic monsters smash through New York. To make matters even more interesting, the monster is actually rarely ever seen. Instead we get to see glimpses of it as it goes by, or we see the devastating effects of its passing, but director Matt Reeves keeps a tight rein on the visuals, letting our imaginations run wild as the group tries to survive (although yes, we DO get to see it after a while, even if only for a short time).

The film itself is simple. The group of young men and women are trying to stay alive and rescue their friend Beth (Odette Yustman) before the monster kills everything. It’s a simplistic framework for the movie, but it works surprisingly well. To keep the tension high and people from getting bored quickly, Reeves films docks in at a lean 85 minutes (including credits), which allows for the film to unfold naturally without being padded with extraneous scenes that usually drag these movies down. To put it simply, I enjoyed the snot out of Cloverfield, but even I have to admit that these types of found footage films work best in small doses, which means a long film will just grate on the viewers patience instead of ingratiating itself to them.

Cloverfield is a bleak and brutal monster movie, with a great sense of suspense and terror. It works for some reason I can’t define, and I really count it as one of the ONLY found footage films that I actually do like. If I had to complain I would have to say it was the monster’s reveal. The marketing for the film hyped Cloverfield for MONTHS. To the point where we were so hyped up for what the monster would look like that when he was finally revealed it was kind of a let down due to our own imaginations making it into something epic and fantastical, when it’s just what it was advertised as. A monster crashing through New York.

No matter what format it is on, Cloverfield is not going to be eye candy. The movie was designed to look raw and uncut, like it was shot by a bunch of amateurs who are running for their lives. The movie has a blocky and awkward look to it that is completely in line with how it was designed to look. It’s just that Cloverfield is never going to look shiny and sleek. This new release, 10 years after the release of the original Blu-ray from Paramount definitely improves upon the old Blu-ray. The film is constantly bathed in shadows, with amber street lights giving off a ghostly hue, or the darkness of side streets imbues a green and blue desaturated look that that just doesn’t give way to mass detail. However, It’s in these dark scenes that we see the improvements. The Blu-ray has always looked mushy and given to large amounts of black crush. The 4K looks finer, with blacks showing actual details I had never seen before, and the banding and artifacting that was inherent to the digital recording on Blu-ray looks almost nonexistent. There’s still the issue of heavy digital noise everywhere, but once again, that is a side effect of the cameras used in nothing but night time settings.

The biggest improvement, in my opinion, is the use of the HDR and Dolby Vision enhancement (I used a TCL P607 to compare the differences between HDR and Dolby Vision for this release) for the colors. There are subtle enhancements that really bring out the little things. A red shirt on a girl, a flicker of a street light upon the head of the Statue of Liberty. The movie will NOT be a demo film, as it was shot using digital cameras that maxed out at 1080p (and the detail levels really aren't much better than the Blu-ray, but this 4K UHD release does improve very nicely upon the already authentic looking Blu-ray from 10 years ago through the addition of HDR and a much less artifact ridden release.

Here is the ONE thing that actually was a bit disappointing me in this release. I know that as a purist I’m glad that Paramount preserved the 5.1 Dolby TrueHD track from the Blu-ray and theatrical mix, but with the addition of Atmos and DTS:X to the home video world, it would have been really neat to hear this devastating track with a wider range of channels available. Still, it’s a bit of a minor gripe as Cloverfield was known to be a demo track to the core in the audio world, at that has not changed one bit. The 5.1 mix may not have overheads or rear channels, but it is about as perfect as a 5.1 track can ever hope to accomplish. Wildly kinetic and hectic, the film bounces you around the room, with debris falling from one corner, and screams emanating from the next. Dialog is always intelligible, even in the midst of some of the most incredible room shaking bass that I’ve ever heard. Yes, bass, bass and more bass. This mix is incredibly bass heavy and the sounds of the monsters ranging in New York are awe inspiring.

Cloverfield is actually one of the best found footage movies I’ve ever seen. Now that’s not saying a whole lot at first glance considering how incredibly poor that most found footage movies are, but I really did enjoy the film WAY more than I expected to. It’s intense, kinetic, and doesn’t slow down after the initially introduction. I have a weakness for monster movies, though, and while I hope that doesn’t taint my judgment, I always recommended this film to friends who wanted a great home theater experience (even if they may become a little nauseous after all the jerky camera movements). As I mentioned in my previous 4K UHD review back in 2018. This isn't going to be a massive upgrade over the Blu-ray due to the filming style. The audio is the same track, and even the extras are the same. HOWEVER, this particular release has the added advantage of having a very snazzy steelbook packaging that will appeal directly to phyiscal media collectors. Again, if the packaging means nothign to you, then the upgrade is very slight, and if you have the 2018 4K UHD disc, then there's no reason to switch. but for those steelbook collectors and those wanting snazzy packaging, this isthe best version out there.

Big fan of this movie. Its the perfect length, moves fast, and is an overall unique experience. I think I liked 10 Cloverfield Lane more, but this is a solid entry.