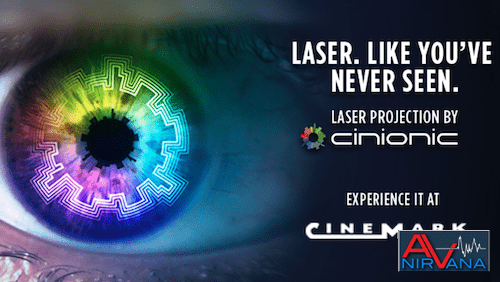 (September 9, 2021) Cinemark, operator of 521 theaters in 42 states and 15 countries in the Americas, and Cinionic, a cinema technology venture that provides projectors to more than half of the world’s commercial cinemas, have announced a campaign to educate audiences about laser projection. The duo shares an exclusive 10-year partnership to light up all of Cinemark’s 5,864 screens with laser solutions delivered by Cinionic.

The two companies spent 2019 upgrading Cinemark locations with Barco Series 4 laser projectors and integrated Barco Alchemy media servers. Now, two years later, they’ve upgraded every screen in 24 different Dallas-Fort Worth theaters. Using the tagline “Laser. Like you’ve never seen,” movie fans in the Dallas-Fort Worth area will experience a marketing assault through social media, online advertisements, and in-theater methods, all with the end goal of creating excitement and driving moviegoers back to the theater.

“Cinionic has been such a tremendous partner over the years, and we are thrilled to continue our relationship with them as we strategically convert our digital xenon projectors to laser over the course of the next ten years,” stated Damian Wardle, Cinemark’s EVP Theatre and Technology Operations. “I’m incredibly proud of our team in defining and executing our laser conversion strategy, which provides a better overall consumer experience with vivid colors and on-screen imagery while providing meaningful cost savings for the company.”

Cinionic says its campaign will spread to other markets as they push to fully transition Cinemark to all-laser projectors.

24 different theaters in two years does not seem like much... I am sure there are more than one screen in each theater... How many screens/projectors/servers would be a more interesting statistic... And yea, there are many other markets out there for top of the line Barco and Christie's digital projectors...

What will drive folks into traditional commercial cinemas? I think that has gone the way of drive in's... Next gen venues would be more intimate, more immersive and less people in the space... Maybe something like a theme ride movie or a bar, grill & movie... Sorry, @Todd Anderson, no business plans...