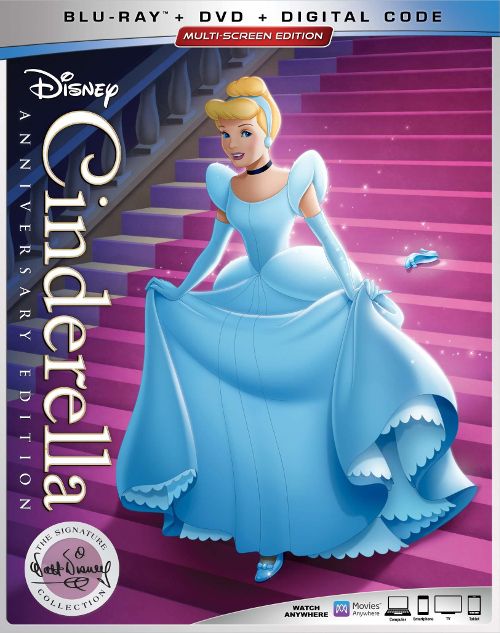 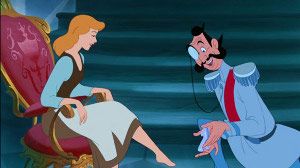 Movie
It’s that time of year again. Or that YEAR again, I should say. 7 years after the 2012 Diamond Edition release (which has been out of print for a little while now) Disney opens up their classic film vault and brings back the 1950 classic Cinderella out for it’s Signature Edition re-release on the Blu-ray format (one of the last Signature Editions for the classic Disney titles I believe). Like usual, it will carry with it the same video and audio tracks that the stellar 2012 Diamond Edition sported, as well as a few tweaks the extras section (some new ones, some old ones don’t carry over, and some are digital) as well as a modern “Movies Anywhere” digital copy for those looking to add it to their digital collection.

Cinderella isn’t as classic or legendary as Beauty and the Beast, Aladdin (my personal Disney favorite), or The Lion King, but it’s REALLY close as one of the big classics that really put Disney on the map, so to speak. A bit of a classic girl power movie (before The Little Mermaid popularized it even further), Cinderella is heartfelt tale of oppression, survival, adaptation and eventually the dream of love that fades into the sunset. It’s a great film, but one that has a few uneven parts that focus more on Cinderella’s supporting caste of cute mice and villains than it does on the Disney princess itself.

The tale of Cinderella is almost as old as time, going back thousands of years into historical fantasy lore, but the idea of a glass slipper, a fairy godmother and a few other tweaks to the story were added by French author Charles Perrault back in 1697. This solidified the newer adaptation as the “canon” that we all know and love today, and made for one of the most rousing success for Disney back in the 1950s. Something that was a MUCH needed thing for Disney, as it had been 8 years since they had released a full on feature film (The Adventures of Ichabod and Mr. Toad not really counting as it was just a short film jaunt for the mouse house), and the box offices were NOT what they once were. After decades of shrinking box offices in a post WWII society, Disney was on the verge of failure, and if Cinderella hadn’t done so well they very well could have gone bankrupt as a film studio. Luckily Cinderella was a massive success and paved the way for the modern Disney glut of animated films that we’re privy to today and is hailed as one of the big “saviors” of the early Disney decades. 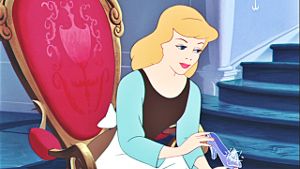 Cinderella not only thrived in the 1950s, but it has become one of the most sold, resold, and re put in theaters Disney films to date. The movie has had more releases than most other Disney films could dream of, and it’s rightly because it’s one of the sweetest and most humble films of the Disney classic lineup. While the film can sometimes drive you nuts with the Princess playing second fiddle to the talking mice and other fairy tale creatures, the movie never over plays its hand and keeps within its means. It’s not dark and cynical, but it manages to capture evil in her wicked (they’re always wicked) step mother (and stupid step siblings) without making them cheesy and ineffective. What makes the film so powerful and poignant even to this day is how Cinderella handles her situation. She’s beaten down, taken from her rightful place as head daughter, and basically become a slave to her Stepmother, stripped of her wealth and privilege. However, instead of fighting back with traditional means, or falling into the trap of cynicism, Cinderella is a shining beacon of optimism and “can do” attitude. She takes control of her own life through her fairy godmother and employs the help of others around her to get to the ball and meet the prince. It’s a story of hard work, teamwork and keeping a positive spirit when times are down.

Is Cinderella the perfect classic Disney film? No, it has a tendency to shift focus away from Cinderella and focus on the colorful cast of sidekicks that Disney is known for (the mice ARE fantastic by the way), but it is a powerful film to say the least, and one of the most beloved Disney animated classics by boys and girls everywhere. While it’s TECHNICALLY a girl power movie, Cinderella is a film that resonates with both sexes equally and is a blast for this near 40 year old reviewer to watch some 69 years later. 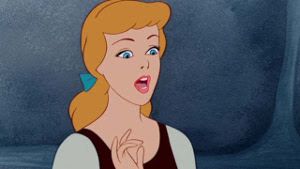 The 1.37:1 AVC encode is an exact copy of the 2012 Diamond release, and brings with it all of the fantastic, and the one disappointing feature of that encode. Back in 2012 Disney was obsesses with removing grain from their animated films and tweaking the color timing a bit. I must state up front, that while I’m a bit saddened that they didn’t leave the grain intact during the creation of the master for these two editions, it is only a minor quibble. They didn’t go full on crazy like The Sword in the Stone, but rather went over the original animation cells one by one and cleaned them up, a by product being the grain was DRAMATICALLY reduced. The colors are simply fantastic, with bright blues, pinks, reds and dusky grays of the castle interior literally popping off the screen. The scene with the fairy godmother’s introduction is just a whirlwind of colors. The remastering allows for the line art to be fantastically replicated (although some lines seem a bit smooth or soft depending on the scene) and the overall disc is nothing short of stunning when compared back to the old DVD editions before the remaster. There is still some debate today about the merits of Disney altering the colors and scrubbing the grain, but this is one of their better masters using those techniques and I don’t have too many quibbles with it besides some purist frustrations. 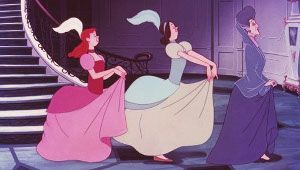 The same thing goes for the 7.1 DTS-HD MA track that is on the disc. It’s a direct port of the Diamond Edition track and still is a great sounding mix. 7.1 may be a bit OVERKILL for a film like Cinderella (the Mono track is also presented on the disc for purists), but Disney has done a wonderful job of opening up the mono soundstage and creating a faux surround sound environment. The dialog and singing is straight up in the front of the room like usual, but the surrounds get all sorts of activity from the musical numbers, as well as the chirping and tweeting of birds, mice scrabbling across stone floors, and other various nuances. LFE is usually just an accompaniment to the music, but there are a few thuds and booms (usually horses hooves or the carriage ride, or a slamming door), but it is evenly integrated into the mix and the track itself is a delight to listen to.

• NEW Try This Trivia On For Size
• NEW Audio Commentary
• Diane Disney Miller Introduction
• From Rags to Riches: The Making of Cinderella
• The Cinderella That Almost Was
• The Magic of the Glass Slipper: A Cinderella Story
• The Real Fairy Godmother
• Alternate Opening Sequence
• Storyboard to Film Comparison: Opening Sequence
• Cinderella Title Song
• From Walt's Table: A Tribute to the Nine Old Men
• The Art of Mary Blair
• Behind the Magic: A New Disney Princess Fantasyland
• 1922 Laugh-O-Grams: Cinderella
• Excerpt from The Mickey Mouse Club
• Radio Programs - Original Radio Shows from the 1940's/50's
• Theatrical Trailers .
• Disney View

Digital Extras
• Diane Disney Miller Introduction
• The Magic of the Glass Slipper: A Cinderella Story
• The Real Fairy Godmother
• Behind the Magic: A New Disney Princess Fantasyland
• Try This Trivia On For Size

Cinderella is a true Disney Classic for a reason, and one of the better ones at that. This new Blu-ray Signature Edition is like most of the Signature editions. It sports the same audio and video specifications from the 2012 Diamond Edition release, and makes a few tweaks to the extras. The real treat for this new edition (if you own the previous Diamond Edition) is the new audio commentary, as it is chock full of great tidbits. If you have the Diamond Edition already, buying the Signature Edition is going to depend on if you MUST have the two new special features (including that commentary). However, said Diamond Ediiton has been out of print for several years so if you HAVEN’T purchased the film on Blu-ray yet than the Diamond Edition brings it back form the Disney vault to give you the opportunity once more. No matter on if you’re fine with the old release, or want to buy this new edition, the film itself is a must buy in my book, and Disney’s Blu-ray is well worth picking up.

I have the dvd one but may het this one for my daughter. Thanks for the review.

We agree with you about the restoration. It's always been a sore spot for us that Disney feels the need to completely scrub out all imperfections and film grain from their animation classics. We were hoping that we would get a new restoration that is more true to the original film, but alas, not this time. If you have time,
You must log in or register to reply here.
Share:
Facebook Twitter Reddit Pinterest Tumblr WhatsApp Email Link