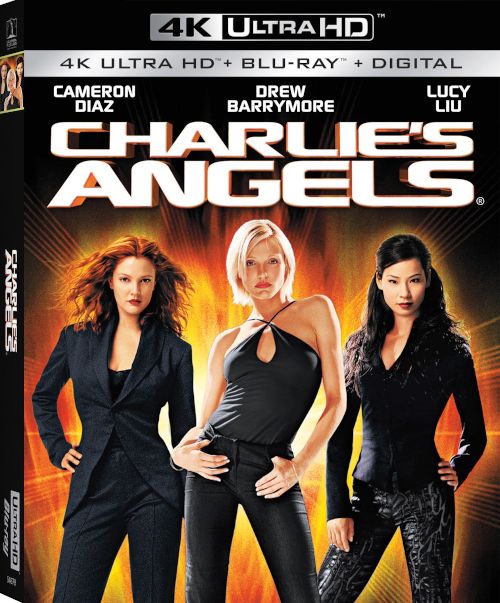 Yup, with the new 2019 Charlie’s Angels movie hitting theaters soon it was pretty inevitable that Sony was going to re release the 2010 Blu-ray of Charlie’s Angels in some form or the other, and we were lucky to have it be the 4K release, complete with a brand new Dolby Atmos track to enjoy. As fates would have it, they are ALSO releasing the long awaited Charlie’s Angels: Full Throttle on Blu-ray on the same date (sadly no 4K UHD), which has been a gripe for fans for nearly a decade. This new upgrade is a solid jump over the aging Blu-ray, and is just what the doctor ordered.

“Once upon a time there were three very different girls”

Charlies Angels was a goofy remake of the whimsical 1970s TV show of the same name (with the lovely Farrah Fawcett as the draw for me) and was never meant to be taken seriously. It’s a girl power movie with modern day (or at least 20 years ago modern) sensibilities, cute and girls (Lucy Liu is still my original high school crush), and plenty of action. Unlike the sequel that I reviewed yesterday, Charlie’s Angels was a much more fun and exciting movie than it’s successor. Sure, it’s over the top and ridiculous, but that’s part of the charm of the movie, and the film makers wink and nod at the camera the whole time, letting the audience that they’re in on the joke as well.

Meet the Angels. Alex (Lucy Liu), Natalie (Cameron Diaz) and Dylan (Drew Barrymore) are an elite fighting trio of female super spies who fight for truth, justice and the American way at the behest of their mysterious millionaire benefactor, Charlie (voiced by John Forsythe) and his right hand man Bosley (Bill Murray). The three have just thwarted blowing up an airplane by a rogue terrorist, and are back out on the case once more. This time their intended target is Eric Knox (Sam Rockwell), a tech genius who has been kidnapped. Breaking him out is easy enough, but when they do so, the angels unlock an even greater mission. 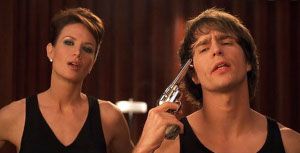 The man behind the kidnapping is one Roger Corwin (Tim Curry), another tech mogul who seems to want Knox’s new software for nefarious purposes, and if the angels don’t get it back, he’ll have control of one of the world’s most advanced voice recognition software on the planet. It doesn’t take a genius to see the double cross happening, but the Angels come under fire from the very people that hired them, and now the three super spies are racing against time to protect their own Charlie from the very people that hired them in the first place.

Charlie’s Angels is a goofy blast of a film, and is held together by the chemistry of the 3 female leads, as well as a scene stealing Sam Rockwell and Crispin Glover. I swear Sam can’t turn in a bad performance to save his life, doing equally well as the mousy computer nerd and then switching gears into the suave and sleazy criminal mastermind at the drop of a hat. Crispin Glover has always been a rather bizarre man in his acting roles, but he COMPLETELY steals the few scenes that he’s in as the evil henchman. His acting in this film was what got him shoehorned into the sequel as well, as everyone literally couldn’t take their eyes off of him on set, and he quickly became the most popular sub character in the film. The ONLY thing that I’ve never liked in these remakes has been their choices for Bosley. I understand making him more comedic than he was in the show, but McG really goes for comedic slapstick timing with both of his Bosleys. At the very least I have to admit that using Bill Murray in this one was a LOT better than the choice to use Bernie Mac in the second one. Bill was still making funny movies at this time in his career and hadn’t moved on to droll indie comedies, thus his normal slapstick persona is on full display.

Rated PG-13 for action violence, innuendo and some sensuality/nudity

McG’s color schemes seem to be on the “hotter” end of the spectrum, and while it’s a great looking image, the colors in particular seem to go full on torch mode much of the time. The reds are so vibrant and hot that they almost burn the eyes, and there’s a light yellowish hue to the color grading as well. The new 4K UHD disc from Sony is spectacular as well, upgrading the aging Blu-ray from a “that’s a nice image” to full on “WOW!” mode. I can’t tell if we got a new master for this release, but the disc is definitely using a very clean and modern looking master that’s been struck fairly recently. The detail levels are superb, as we get to see every goofy costume the girls wear in sparkling clarity, as well as the 2000 era CGI, or falling debris from a castle fight. Black levels are silky black, with deep deep shadows that still show off plenty of detail amdist the shadows. The HDR really enhances the already brilliant colors on screen, resulting in some on screen pop that really is dazzling. There’s some mild grain spikes here and there (such as when Alex is walking down the hall in her black leather as Redstar), but other than that, this is a spectacular looking image.

Sony has included the original 5.1 DTS-HD MA from the Blu-ray as WELL as a brand new Dolby Atmos track to enjoy. Ironically, the 5.1 DTS-HD MA track was volume boosted from the get go, requiring you to turn it down about 3-4 Dbs, while the Dolby Atmos track is recorded at a lower volume than normal, meaning I had to turn it UP 4 Dbs to get to reference level. Now don’t worry, this is not a Disney release so just because it has to be turned up a couple of notches on the receiver doesn’t mean the dynamics are squashed and the bass muted. This is still a powerful track that really latches on with all the excessive explosions and smashing of things. Gunfire is powerful and deep, kicks and punches slam you back in the chair, and the surround usage is superb. The little nuances from the Atmos track’s overhead are a welcome addition, such as the helicopter near the end, or falling debris. Bass is punchy but never excessive, and the volume crisp and clean (although they are recorded a HAIR lower than the rest of the track, but it’s barely noticeable).

• ALL-NEW: Sneak peek at the new 2019 Charlie's Angels film with an extended clip from the film
• Trailer

Charlie’s Angels is a movie that relies primarily on the visuals of the film, and the chemistry of the leads. It’s most certainly lacking in the plot department, and even though we’re privy to tons of plunging necklines and comedic innuendos, it never sizzles in that sultry sort of way that the original show did 50 years ago. Still, it’s a fun bit of girl power butt kicking, with lots of ludicrous action scenes and tons of comedy. I have a guilty little spot in my collection for this one, and my wife is more than ecstatic every time I whip the disc out to play. The new 4K UHD disc from Sony is well deserving of praise as well, given that they have upgraded the video AND the audio quite a bit from it’s 9 year old Blu-ray counterpart. Definitely recommended for a fun watch.

Thanks for the review. Awesome eye candy! lol

I think I'm going to have to watch this one again soon. It's just a fun show. Also looking forward to the new one. Thanks for the review.

Someone noted on Twitter... Charlies Angles: Full Throttle was the first Blu-ray release ever!

Todd Anderson said:
Someone noted on Twitter... Charlies Angles: Full Throttle was the first Blu-ray release ever!
Click to expand...

lol, that was a joke about it being one of the first titles AUTHORED on Blu-ray. up until this week it was never released on Blu-ray

Wait. Are you sure?

Todd Anderson said:
Wait. Are you sure?

yup, it was authored back in 2005, but has NEVER been released on Blu-ray till this week. It's been a running joke that it's the "first" ghost Blu-ray ever