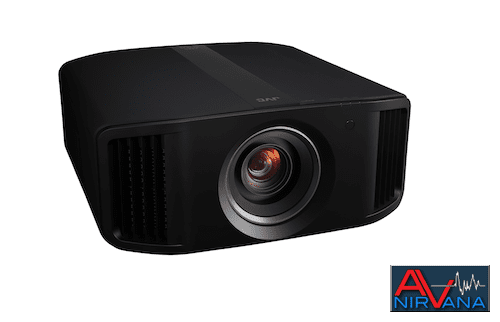 The NP5/RS1100's image quality is anchored by the same narrow-pitch pixel 0.69" native 4K D-ILA device found on JVC's top models, which means 4K pixel-shifting is officially a thing of the past in JVC's D-ILA lineup. Unlike the NP5/RS1100's more expensive laser-based siblings, the projector achieves 1,900 lumens of brightness using a 256-watt ultra-high pressure mercury lamp. That light source works in tandem with an optical engine with a wire grid to achieve a native contrast of 40,000:1, a rating that translates to a dynamic contrast of 400,000:1 once an onboard intelligent lens aperture is activated.

The NP5/RS1100 is also equipped with a 65mm diameter all-glass lens with 17 elements in 15 groups. This design is capable of delivering a true 4K Hi-Res image that remains in focus to the periphery of screens ranging in size from 60" to 200".

Onboard image-enhancement technologies include an improved Clear Motion Drive and JVC's proprietary Frame Adapt HDR and Theater Optimizer. Clear Motion Drive, JVC’s original image blur reduction technology, delivers more refinement and greater accuracy by analyzing more frames of video than before. In combination with Motion Enhance, which optimizes the drive of the D-ILA device according to the movement of the image, this technology can be engaged to smooth 4K motion reproduction.

Of course, the NP5/RS1100 has motorized focus and zoom capabilities, motorized lens shift (Vertical: 80%, Horizontal 34%), and the ability to save up to 10 types of install adjustments (including lens memory, pixel adjustment, screen masking, screen size/gain, and aspect ratios). It's also 3D capable.

The Procision Series DLA-NP5 and Reference Series DLA-RS1100 carry a price tag of $6,999 and will begin shipping in March 2022.

JVC is also using CES 2022 to launch a new Ultra High Speed HDMI certified VX-UH1150LC HDMI cable that's eARC compliant. Using a hybrid cable structure of optical fiber compatible with 48Gbps signals and metal with reinforced shield and the latest optical conversion chip, the VX-UH1150LC can stably transmit both 8K60p and 4K120p over 15m of length. It achieves stable transmission without the need for an external power supply while easing installation headaches with a terminal depth of 38.5 mm and a minimum bending radius of 35mm.

* I know well that technically it's much more than just a cable, but even taking this into account I think this price tag is outrageous ...

Is anyone else wondering when/if JVC will enter the ultra short throw projector market?