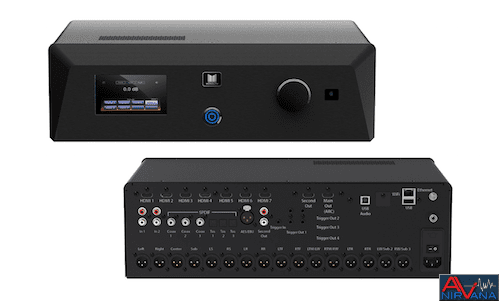 (Monoprice) The all-new HTP-1 Processor will ship this coming fall.(January 3, 2019) There’s always one or two bombshell CES reveals that rock the home theater world, and this year Monoprice is taking the controls and striking first. Just minutes ago, the company officially raised the curtain on two new Monolith product classes that have been kept under tight wraps.

First up, we have the all-new Monolith HTP-1 Home Theater Processor. Aggressively priced at $3,999, the HTP-1 delivers a whopping 16-channels of processing backed by support for both Dolby Atmos and DTS:X immersive sound (along with Dolby and DTS upmixing alternatives). That means enthusiasts can utilize a variety of speaker arrangements, including max deployments of 9.1.6, 7.3.6, and 7.5.4 for Dolby Atmos, and 7.1.4 or 7.5.4 for DTS:X.

Connectivity-wise, the rear of the HTP-1 presents seven upgradable HDMI 2.0b input modules loaded with compatibility for current 4K video technologies, including HDR10+ and Dolby Vision, along with a host of digital and analog input options. It also offers two HDMI 2.0b outputs, with one capable of delivering Enhanced Audio Return Channel (eARC) performance for immersive sound. Other outputs include 16 balanced XLR connectors for primary subwoofer and amplifier connections.

Monoprice says the HTP-1 will ship with a Google Chromecast dongle for access to audio sources such as Spotify, while also internally housing Bluetooth and Roon Endpoint connectivity.


Among a range of “audio enhancements,” such as PEQ, 4thorder Linkwitz-Riley Crossovers, tone controls, and the like, Monoprice has opted to grace the HTP-1 with Dirac Live Room Correction functionality.

This particular processor is currently scheduled to begin shipping sometime during Q3 of 2019. Based on Monoprice’s ability to deliver Monolith products on time, this date should hold true.

Monoprice is also unveiling three new THX Certified sealed subwoofers. The all new 10”, 12”, and 15” models have the same amps, two-layer long fiber pulp/glassfiber drivers, and HDF cabinet construction found on its popular THX Certified ported Monolith models. And, once again, the subs are finished in a Black Ash vinyl covering, featuring two RCA inputs and XLR input/outputs. I’ve had an early peek at preliminary frequency responses for the three new models and the low-end looks like it should hit hard and deep, with bass performance down to 20Hz and below. This is great news for enthusiasts looking for high-end performance from affordable sealed designs.

Monoprice has not released official weights for any of the three models.

Pricing and model designations are as follows:

All three subs are expected to begin shipping sometime during February or March of 2019. 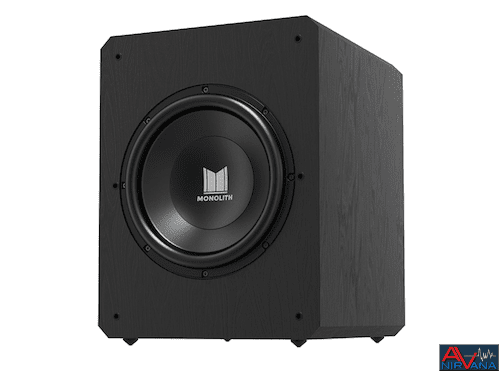 (Monoprice) The new M10-S 10" Monolith Subwoofer*Editor's Note: AV NIRVANA has confirmed that the HTP-1 will ship with Auro-3D onboard!
Last edited: Jan 22, 2019

Noah Katz said:
What upmixer (other than DSU and Neural:X that both have)?

Also, any word on if the HTP-1 will have DTSX Pro?
Click to expand...

Obviously with Auro-3D, the AuroMatic upmixer will be included. I don't think anything else has been finalized.

As for the Pro... they'll have the actually codec in-house soon, at which time they plan to do some testing. So, it's possible

Matthew J Poes said:
I also had confirmation from the builder that this is made by ATI on the same platform as the lower end Datasat. They couldn’t share specifics of how it’s similar or different. I wanted to know more about the DACs and circuit design.

Todd if you can ask about the internal chips and if it’s a true differential balanced design, that would be helpful.
Click to expand...

Noah Katz said:
What upmixer (other than DSU and Neural:X that both have)?
Click to expand...

The latest Dolby licensing agreement prohibits manufacturers from allowing any other licensed upmixer from being applied to Dolby-encoded content.

In essence, what this has said is that you can't allow users to play a Dolby track through the DTS up mixer, but if Emotiva wanted to create their own proprietary upmixer, they could apply that to Dolby, as long as they did not license it to other manufacturers.

The Emotiva crowd was very disappointed when Emotiva dropped the plans for a proprietary upmixer for the RMC-1, but now it is being alluded that the Dolby upmixer will gain more functionality with Dolby tracks. Primarily being the ability to add width channels to a 7.x.x Atmos-encoded track.
N

[Quote not working for me] > now it is being alluded that the Dolby upmixer will gain more functionality with Dolby tracks. Primarily being the ability to add width channels to a 7.x.x Atmos-encoded track.


Atmos tracks already have wides enabled (though from what I understand they're often not used much); perhaps you mean adding them to the Dolby upmixer?

That would be awesome, as I run wides with Neural X and love them.

Wow this has been delayed several times now anybody know what the hold up is?

I talked to Hobie not too long ago... they were working on streamlining the GUI.

As far as I know, it’s really close.

Todd Anderson said:
I talked to Hobie not too long ago... they were working on streamlining the GUI.

As far as I know, it’s really close.
Click to expand...

Will you be reviewing one?