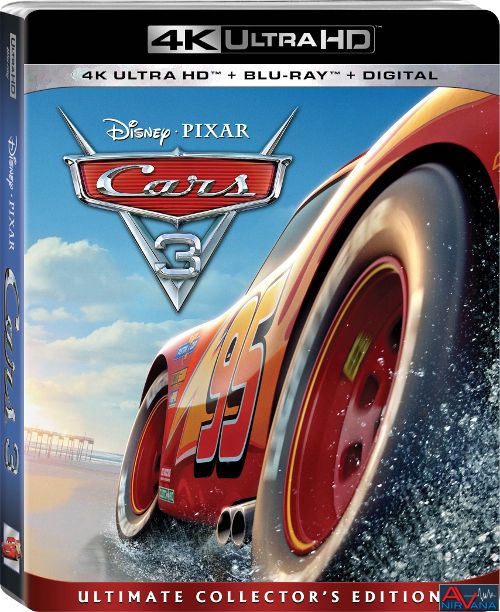 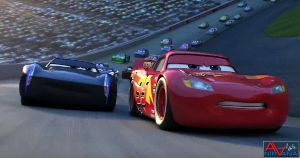 Movie
I have to admit that I was never THAAAAAAAAAAT huge of a fan of the Cars films when they first came out. I like or love pretty much every Pixar film to date, but Cars hit a dull spot for me back when it came out back in 2006. It was a passion project for John Lasseter, but only did “decent” by Pixar standards in the box office. When Cars 2 came out in 2011 it was met with mediocre success at the box office, and was critically a bit of a stinker for the Pixar brand. I can understand that frustration, as they deviated from the success of the first film (which has actually grown on me over the years) and turned it into a foreign spy/adventure movie. A movie that took the fans out of the racing genre and left them feeling a bit cold. At this point I figured Lasseter had had enough and was going to retire the franchise, but in 2017 it was made clear that we would get at least one more film in the lucrative franchise. Usually films go DOWN in quality as they continue, but Cars 3 actually surprised me by being a nice step up from Cars 2 and ALMOST rivaling Cars in entertainment value. Sadly it didn’t do too hot at the box office, which means that this will probably be the final film in the series. Something which I think even Lasseter knew, as the film’s entire premise is about coming to grips with old age for an “athlete” and having to pass the torch on to someone else.

Lightning McQueen (Owen Wilson) is having a bit of a problem in his “older” age. He’s still the car he used to be, but the competition is not who he’s used to racing. The newer generation rookies are coming in with sleeker designs, more aerodynamic frames, and more engine power making him and his kind obsolete. After one too many losses due to newcomer Jackson Storm (voiced by Armie Hammer, the perfect job for a snooty douche canoe), McQueen’s future is not too certain. He’s still winning a number of races, but Storm is (excuse the pun) taking the track by storm and beating him consistently. While his future is uncertain in the racing realm, McQueen desperately wants to hold onto his legacy even though all of his competition is being replaced by these newer, better cars that are making him second best.

After being acquired by a racing mogul by the name of Sterling (Nathan Fillion) McQueen is told that he is going to be retired at the end of the year and his brand name is going to sell all sorts of goodies for Sterling. Desperate to keep racing, Lightning makes a final plea to Sterling. Let him race in the Florida cup and train with his best trainer, Cruz Ramirez (Cristela Alonzo), in the time between now and the race. With Sterling reluctantly agreeing to the aging car’s request, Cruz and Lightning (along with Mater and his racing crew) head out to the old dirt roads of McQueen’s past to get down and dirty with himself. Along the way the bright red car may actually learn that a person’s (or car’s) peak doesn’t determine his happiness and purpose in life, and that giving all the knowledge and skills he has learned over to the years to an up and comer can be some of the most rewarding parts of his career.

Cars 3 ended up being a LOT better than I expected after the very mediocre Cars 2. The film got back to the basics with Lightning McQueen hitting the tracks once more in a fight for dominance. However, it took a very sweet (and sometimes bittersweet) look at the waning years of a professional racer. Being in a competitive sport myself for almost 20 years I know what it feels like to come to the peak of your physical performance, and then have to come to grips with the realization that the downside means you’re slowly fading away while younger men/women start to eclipse you in the ring. McQueen goes through the stages of grief in G rated manner. First dealing with depression, bargaining, a little anger and finally coming to acceptance once he realizes that he can still be useful in this without being the top dog.

Performances were excellent as usual, with Alonzo and Wilson taking the number 1 spots and Armie Hammer hamming it up as the douchey Jackson Storm was wonderful. The only real downsides to the film is that the Cars series just isn’t THAT great of a franchise in the writing department. All the appropriate check boxes are marked off for a good children’s film, but the “feels” just isn’t there like so many other Pixar films. It’s a small quibble, but one that makes me knock it down from a 4/5 rating to a 3.5/5 just due to the fact that it’s harder to emotionally connect with than others like Wall-E or Toy Story or The Incredibles.

I’ve usually been a fair bit disappointed with animated 4K UHD transfers, especially ones finished with a 2K DI, as they usually only show minor upgrades over the Blu-ray. Many GREAT looking Blu-rays look fantastic on 4K, but the thing is they’re nearly indistinguishable from their Blu-ray counterpart. However, in this case, Cars 3 is a STUNNING 4K UHD disc that shows some VERY appreciable differences from the Blu-ray and is one of the best the format has to offer along with Passengers. The use of HDR is incredible with the bright colors of the cars literally popping off the screen in ways I honestly thought wasn’t possible. Textures are more visible and the shining lights flickering across the car’s frames seem eerily lifelike. The banding that I noticed in the Blu-ray seemed to have dissipated and overall this is one amazing looking 4K disc. You can see bursts of sand and dirt kicked up when the cars race on the beach, and the mud rally race is so vibrant and clean you can see globules of mud that look and move like REAL pieces of dirt. Simply amazing.

I was a little surprised in seeing that the Dolby Atmos track isn’t a huge upgrade over the 7.1 DTS-HD MA track found on the Blu-ray due to there being very limited use of the overheads. There’s some coo directional shifts in the surrounds during the races, but overall this is near identical to the 7.1 track thanks to the minimal use of overheads. The track is still vibrant and full though, with a great use of the front soundstage with the races, and some wild use of surrounds all around. Those surrounds are very precise and even when the film is more dialog heavy, there are some neat background noises like a wrench falling in the rear of the stage, or the screech of tires behind the listening position. LFE is restrained, but still quite punchy and powerful when needed. Overall a fantastic track, but one that doesn’t really make great strides over the 7.1 Blu-ray mix.

• Miss Fritter’s Racing Skoool (Exclusive new mini-movie) – Enjoy blindsided testimonials from the Crazy 8’s, touting the transformative impact Miss Fritter’s Racing School has had in reshaping the direction of their lives
• Theatrical Short: “Lou” – When a toy-stealing bully ruins recess for a playground full of kids, only one thing stands in his way: the “Lost and Found” box.
• Let’s. Get. Crazy. – Get schooled in the world of demolition derby, the “rules” of figure 8 racing, and how Pixar puts the crazy in the Thunder Hollow Crazy 8 race. This piece is hosted by Lea DeLaria.
• Legendary – a close, historical look at the racing legends Wendell Scott and Louise Smith, whose tenacity and perseverance got them into the race even when they weren’t invited.
• Ready for the Race – Disney Channel’s Olivia Rodrigo and NASCAR Racer William Byron check out the Hendrick Motorsports campus to showcase how real-world race training influenced the filmmakers.
• World’s Fastest Billboard – Blink and you will miss all of the graphics and “car-ified” advertisements created by Pixar’s Art team to make the ”Cars 3” world as believable as possible.
• Cruz Ramirez: The Yellow Car That Could – Join Cristela Alonzo and the filmmakers on their journey to create a race-car trainer turned champion racer.
• Generations: The Story of “Cars 3” – For the story team, creating Lightning McQueen’s next chapter didn’t involve just a tune-up, but a complete overhaul.
• My First Car – A collection of illustrated first-car stories as narrated by members of the “Cars 3” cast and crew. “A Green Car on the Red Carpet with Kerry Washington,” “Old Blue,” and “Still in the Family.”
• 5 Deleted Scenes – Each deleted scene is set up with an introduction as to why it was removed from the film. Deleted scenes include “The Boogie Woogie,” “The Jars of Dirt,” “Lugnut,” “The Bolt,” and “More Than New Paint.”
• Cars To Die(cast) For – Take a look at the phenomenon of die-cast toy collecting and the more than 1,000 unique designs that exist in the Cars universe.
• Commentary – Brian Fee (Director), Kevin Reher (Producer), Andrea Warren (Co-Producer) and Jay Ward (Creative Director)

Cars 3 makes a good bookend to the series, and a much better film than the very weak Cars 2. It also may very well be the final film in the franchise, as Cars 2 was not very well received theatrically, and Cars 3 wasn’t much better in that regards. Personally I’ve always felt that Cars franchise was the weakest in the Pixar lineup, but still makes for a fun watch. The films are always full of great racing scenes, lots of shiny colors and STUNNING audio/video transfers (one of the best 4K UHD discs I've seen). All the extras are pretty beefy with the majority of them spread on a second Blu-ray that is present in the Blu-ray set. Despite my frustrations with Cars 2, I really like how this one handed the torch over, and acts as a very satisfying conclusion for the story of Lightning McQueen. Definitely worth a watch, especially if you’re as big a fan of Pixar films as I am.

Thanks for the review. I did enjoy the first one over the second one. Will give this one a try.

and a few clips to tease you even further!