Can You Ever Forgive Me? - DVD Review

Can You Ever Forgive Me? 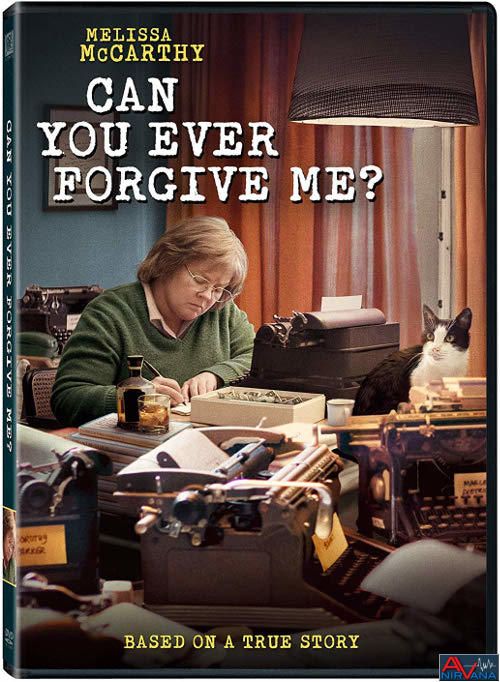 Movie
Can You Ever Forgive Me? Is probably the best unheard of Oscar nomination of the year. A biopic retelling of real life forger/author Lee Israel, it once again proves that Melissa McCarthy CAN act, and can do so flawlessly. I’ve seen glimpses of her true talents in films like St. Vincent and the TV show Gilmore Girls, but she truly spreads her dramatic wings in this new biopic. The basis for Can You Ever Forgive me? stems from the real life criminal dealings of Lee Israel, a biography writer who started forging personal letters from dead writers in order to make ends meet. I was stoked for the film a few months back, but it seemed to slip under the radars theatrically for the most part, but was nominated (although didn’t win) almost a dozen awards at the varying awards ceremonies over the last month. To say that Melissa McCarthy could garner a nomination for best actress seems almost ludicrous considering her penchant for low grade slapstick comedies, but here she truly shines in a biopic that is every bit as mesmerizing (and in some ways better) than many of the Oscar winners out there this year.

As I said, Can You Ever Forgive Me? is based off of the real life memoir by the same name from Lee Israel. Israel was an older non fiction writer with several best sellers, but later on in her career (during the 80s and early 90s) her career took a nose dive. Israel (Melissa McCarthy) was in a slump, and she couldn’t get out of it. A raging jackass of a personality, Israel was 51 years old, living in a cheap apartment, behind on her rent, and stuck with a sick cat. Her agent Marjorie (Jane Curtin) was refusing her calls, and she was fired from her day job for being a vulgar, unlikable, person. To make matters worse, she was in a creative slump. The only thing she had going for her was another biography on Fannie Brice, and no one really wanted to read a dull biography.

As luck would have it, Israel stumbles across a real find. A hand written note from a dead author which is promptly sold at a local bookstore for $175. Realizing that there was profit in the world of literary time capsules like letters, the down on her luck writer decided to embellish and fabricate a few more of them in order to pay bills. Suddenly a few turned into hundreds, as Lee Israel begins putting her heart and soul into these forgeries. Selling them all over New York with the help of her friend Jack Hock (Richard E. Grant) she slowly begins to bottom out. What was once a lucrative forging operation turns into a nightmare when the inevitable happens. A few forgeries are found out, and suddenly the FBI is knocking on her doorstep with a subpoena for her so that Lee can pay for her crimes.

Watching the film I was completely mesmerized by Melissa McCarthy. I’ve seen her act seriously in a few little bits here and there, and St. Vincent was fantastic thanks to her contribution. However, Can You Ever Forgive Me? Is her magnum opus as the little drama just oozes talent. The real life Lee Israel was by all accounts one of the single most unlikable people alive. A truly hateful human being who just was so abrasive that very few people could get close to her. McCarthy plays her with a genuine balancing act, allowing the audience to both hate and pity her, even when she’s being her most vile. Part of me wants to balk at having the audience pity Israel, but I have to conclude that the only way that you could create a main character out of the writer was to make the audience have SOME sort of bond with her. Loathing her from the get go and never letting up would only alienate viewers, and as such director Marielle Heller had a very delicate job of making McCarthy’s Israel as hated as she possibly could, but only insofar as you’re still attached to her. Lee’s love of cats and her weird friendship with Jack Hock grounds her in the eyes of the viewers, and the rough treatment she’s given at the hands of the writing community allows you to sympathize with her plight. However, she’s just a despicable person in many ways, and McCarthy oozes abrasiveness and plain unlikablility at the same time. It’s an odd sort of juxtaposition, where you both hate and pity the writer in equal amounts.

Richard E. Grant is also just as likable and repulsive at the same time, a degenerate bum who basically sleeps his way through Manhattan with every guy he meets, and whose aging charm is starting to fade just a little bit. The two play off of each other so fantastically well that it allows the audience to suspend their hatred of the characters long enough to truly enjoy their interactions. I also appreciated how subtle the film could be at times. It doesn’t just lay on everything with a heavy voice over. Certain aspects of the characters are allowed to be observed and interpreted without specifically saying anything about it. For example, we know that Jack Hock is flaming gay, but Lee Israel is as well, and while she’s not out there hitting on women, there are several relationship points that crop up (the book store owner for one) that clue you into that fact. The same can be said for why Jack is so sick at the end of the movie. Real life Jack Hock died of aids, and while you get the drift quite easily about his dilapidated condition at the end of the movie, it’s not blared from the rooftops. It subtly allows the viewer to catch key points without over feeding them and the movie really benefits from that smooth story telling.

Rated R for language including some sexual references, and brief drug use

Sadly this was a shocking twist where the Blu-ray release seems to have been canceled at the last moment and we’re left with the DVD for home video (and of course the 1080p digital downloads for those who aren’t into physical media or want the higher resolution). The DVD looks rather nice, with a sort of muted and sepia toned look to it (along with some yellowish hues at times. There’s some digital noise and artifacting in the dimly lit apartment sequences, but overall the clarity can be quite pleasing. There’s an almost aged and weathered look to the film, almost like the letters that Lee Israel is trying to pass off, and the unique visual style adds a textural look that really is strangely nostalgic. Fine details are good, with faces showing the most intimate details, and background looking a bit hazier at times. The outdoor shots of New York look the best, while the digital noise spikes back at the apartment and dimly lit bookstores mostly.

The English 5.1 Dolby Digital track is what you would expect for a film of this genre. The movie is VERY front heavy, with a heavy emphasis on quiet dialog throughout. The front sound stage opens up a bit with the score, as does the surround channels, but they are mostly used for minimalist ambient noises (such as a busy restaurant where Lee goes to dinner). LFE channel is basically reserved for the score and very little else, but while it’s not a wild and busy track, it’s very clean, very clear, and very precise.

I guess you could call this the best Oscar nominated film you’ve probably never heard of. Can You Ever Forgive Me? is probably my favorite of the Oscar nominated films, and sadly one of the most looked over of the year. Melissa McCarthy and Richard Grant are both in top form, and it really shows that McCarthy is more than just the female Kevin James of Hollywood. The film is a bit slow paced, and has a very 90s period piece feel to it, but it is simply mesmerizing to watch and even with the addition of her husband Ben Falcone (he plays a sleazy book store owner and memorabilia collector) it turns out MUCH better than anyone could have possibly imagined. I was extremely saddened to see that the Blu-ray release was canceled (seemingly last moment, as many leaks were claiming for it to get a Blu-ray release), but if you’re not too enthused about the 480p DVD available, it IS available in 1080p for the digital release. Whichever format you get, definitely worth checking out.

Thanks for the review. My wife had mentioned this movie. I will watch it with her soon.

Thanks for the review. Never heard of this movie. Will check it out.

No blue ray ? That is just wrong. So I guess this will be a rental for me. Thank you for this review.