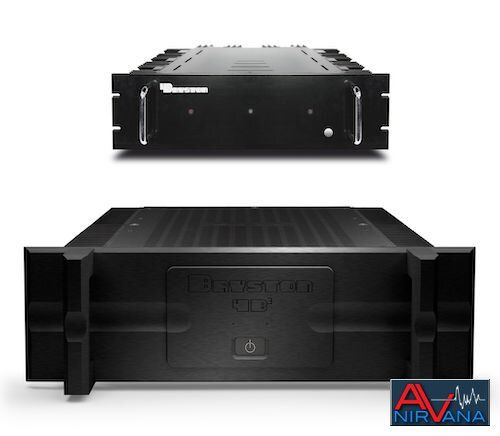 (June 23, 2019) Bryston owners currently enjoying any of the company’s older generation 4B amplifiers have been given a golden opportunity to trade-up to new gear. Under the terms and conditions of Bryston’s new “4B Trade-Up Program,” 4B owners in the US and Canada can earn a “substantial” credit toward a new Cubed Series amp at any authorized dealer.

“We think this program is valuable because it makes trading used gear wonderfully easy—and we will offer them great value for their older amplifier while rewarding them for brand loyalty,” explained Gary Dayton, VP of Sales & Marketing at Bryston. “We are also excited to generate new opportunities and overall excitement for Bryston dealers in North America as consumers explore upgrading their systems.”

Bryston’s Cubed Series sets new standards of performance with higher power, lower noise, and significantly lower distortion. Top that off with Bryston’s superior build quality and a 20-year warranty, current 4B owners are certainly in for a treat.

According to Bryston, all trade-in amplifiers will undergo 100 hours of factory testing and receive an extra five years of warranty time prior to being resold as a Sound Certified used product. Owners interested in learning more about the 4B Trade-Up Program, including receiving a trade-in value on current gear, should visit www.bryston.com/trade-up.

They should do the same thing with their processors, trade in an SP2 or 3 for an SP4. There are new A/V standards every 2-3 years, amplifiers are pretty much one and done in comparison unless you get new speakers that have different requirements. That is probably why they need to do this, there was basically no need for 4B owners to change amps so they had to figure out how to upsell them.
V

I agree, this is exactly why they should let you trade in your processor as well as your amp. Processors get stale after 3 years, amps can keep going. I see 20 year old Sunfire amps on Ebay for $1K, that's the same price they went for on Ebay 20 years ago! A $3500 Sunfire processor from the same time now goes for $350!
V

Clearly I didn't do a very good job making my case in my first post. I'll give it another try. While I agree that it would be awesome for the consumer if Bryston offered a healthy trade-in credit for your obsolete pre-pro towards a brand new current model, the reason why they can't seems pretty obvious. Just like an old computer, obsolete pre-processors with their out of date HDMI connectors, old surround codecs, and too few channels are not cost effective to update. Therefore even after a once over and re-certification by Bryston, no one will be looking to buy your re-conditioned SP-2 again. Certainly not for a price that would see Bryston making a profit on the entire trade, re-certification health check, and subsequent trade-in re-sale.

If Bryston were to ultimately decide to offer a pre-processor trade-in, the credit would have to be a pittance, say $500 for an SP-2. Likely your local dealer would be required to "eat" a portion of that discount. That way perhaps they could afford to treat the trade as a repeat customer goodwill discount and then simply scrap the old unit. Except that the optics of that will most assuredly off some Bryston customers. "What? you are only offering me a $500 credit for this component that was $4000 when I bought it less than a decade ago!" Oops, Bryston doesn't need that sentiment living forever in Google reviews either...

On the other hand, once Bryston performs a "health check" and re-lists your ex-trade-in power amp for sale with an extended factory warranty period, Bryston could reasonably expect to still turn a profit on your trade-in power amp. It remains a dated but still perfectly useful and relevant component.
Last edited: Jun 29, 2020
W

A new SP4 is around $15K. I think they could give SP2 owners a 10% discount when they trade in an SP2 toward an SP4 and still have a healthy profit margin. Paradigm had a "trade up" special where they offered a 20% discount to anyone trading in old Paradigm speakers toward purchase of newer models.
V

My understanding is there is a lot of "3rd party stuff" in the new SP4. If so margins on this product may not support what you propose. Paradigm and its sister brands remains largely vertically integrated which maximizes their profitability- particularly on the loudspeaker side. And with the exception of old HT dipole surrounds, decent older speakers are like decent older amps. There is still some re-sale value in there, particularly when "re-certified" by the manufacturer.

Don't get me wrong, as a fellow consumer and AV enthusiast, one that has ridden through several cycles of Meridian's (565, 568.2MM, G68XXV, 861v4LPS) pre-pros before recently purchasing an Anthem AVM60- I totally get where you are coming from. We lose our shirts when we invest in hi-end pre-processors. They devalue completely over increasingly short timespans. That's why I just don't see it happening. Manufacturers would need to further inflate prices in order build in room for the trade-in discount we'd like. I already get sticker shock when I read what the latest flagship pre-processor from Bryston, Theta, Datasat, Trinnov, etc retails for!
Last edited: Jun 29, 2020
W

Well if upgradeability is what you want NAD offers it in their processors via "cards with modules installed. They switched from Audyssey to Dirac via a firmware update! Bryston's SP4 is a rebadged processor offered by Storm Audio that is also upgradeable via "cards". Storm has a new card for the changing HDMI standard as well as Dirac's bass management module. Can you imagine Bryston doesn't even know if or when they plan to offer it too??
V

I've been down the upgradable uber processor route before with my Meridian 861. It was upgradable until it wasn't. While an 861v4 appeared outwardly identical to its v6 successor, internal infrastructure changes to accommodate discrete 7.1 made my v4 a dead end. Those two additional discreet input channels in the v6 didn't come cheap. An 861v6 was a $15k CAD processor when introduced. v8 (still only 7.1) saw a few refinements and a linear power supply finally along with a $20k CAD price tag. A few years later, oops dead end again. No way forward for immersive audio adopters.

I love to own great gear. And when it comes to 2 channel components, or amplification and loudspeakers I will continue to do so. But I just can't further justify the losses you take every few years trying to keep up with the flagship processor game. For me even the offer of a 10-15% trade-in credit for my prior model, same brand wouldn't change that. I suspect me and the gently used Anthem AVM60 I just bought are gonna get along just fine for a few years. After that the Monolith HTP-1 gives me hope that there will be more sensibly priced high sound quality alternatives to the flagship processors from the Big Boys. Perhaps ATI will introduce there own ATI branded price concious competitor for the Monolith which they build anyway.
W

That is a good solution. I upgraded my processor when atmos rolled out and got the Marantz 7702 and with hindsight I realize how lucky I am. I prefer to upmix music in immersive audio and have been using wide channels since 2001. My Sunfire TG3 had 9 channels which included wides (side axis they were called). The 7702 has legacy codecs DTS Neo-X and Audyssey DSX in addition to Atmos and Auro-3D. Those codecs are now unobtainium so unless DTS Pro blows my sox off with wide channels I will hold for now. I am still upgrading SQ via room treatments, calibration, using audio streamers that have internal dacs, etc. Have you noticed that the measurements of the VAST majority of surround processors and receivers are dreadful?
You must log in or register to reply here.
Share:
Facebook Twitter Reddit Pinterest Tumblr WhatsApp Email Link