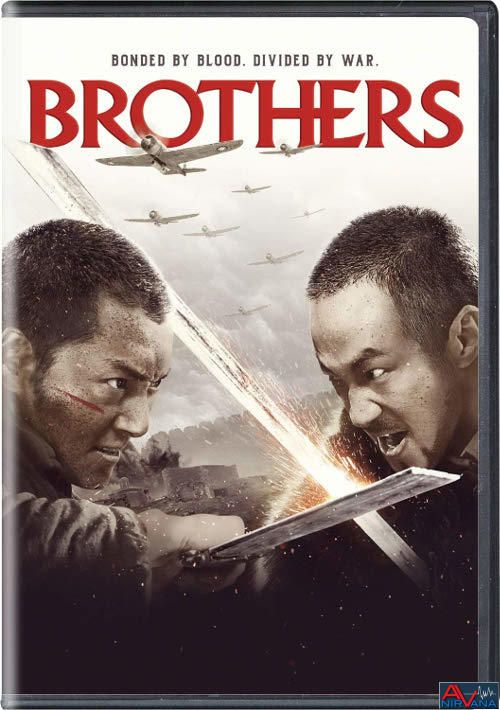 Movie
I was a little perplexed as most of Well Go USA’s Hong Kong fare goes straight to Blu-ray, instead of being bypassed for the DVD format. I guess I should have guessed why, as Brothers (not to be confused with the other half a dozen films of the same name that came out across the globe in 2017) is a bit of a mixed bag. It sadly didn’t do to hot in it’s native China, and seems to have been shuffled off to the American market and given the cold shoulder by Well Go USA as well. It’s not hard to see why, as Brothers is an interesting (if not fairly cliché) topic of two brothers separated by war and refound on the battlefield. Unfortunately, it also is the very definition of style of substance, as director Kiefer Liu (known as Ahgan) heavily processes the film so that it really resembles the Chinese version of Sin City, complete with black and white cinematography punctuated by splashes of wildly CGI looking blood as one of the only colors (there’s a few splashes of neon lighting in bars and cities, but the CGI blood is designed specially to be the only color). The back story, the drama, and the war are back ground elements, seemingly only there to flesh out the slow motion and comic book (ish) nature of the cinematography.

The story is simple and concise. In the 1940s China was going through a civil war. Two brothers, Chen Tiejen (Peter Ho), and his younger brother (Ethan Lee) are caught up in the middle of it. Shortly after joining up in the Red Army the younger brother is lost in combat. 5 years later, Tiejen has grown up and become a Sgt in the Red Army, and one of the fiercest. During combat he comes into contact with a warrior as fierce as he is, only to see the younger brother that he lost so many years ago. Shocked and stunned, Tiejen is taken by surprise and captured by his brother. It seems that his younger brother was captured and assimilated into the Kuomintang army, and now on a mission to bring a group of female musicians to the besieged High City to boost the morale of his troops.

Shocked and horrified at what he sees, Tiejen begs his brother to come with him when his life is spared, but his brother is only a shell of the man he once was. Instead of the goofy younger brother who was spared all of life’s pain, he is now a hardened warrior with only one mantra “there are no brothers on the battlefield”. Enraged and furious at his “betrayal”, Tiejen becomes a force to be reckoned with, waging his war upon his own brother, desperate to have his only blood and kin see him for what he is. The older brother who just wants to see his family back. But his brother was right. In war, there are no brothers, only soldiers. 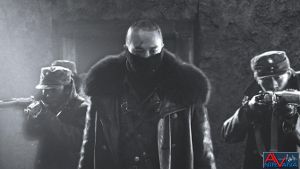 Brothers might have made for an interesting drama but for all of the emphasis on the stylistic visual choices that Kiefer Liu made. The backstory of the two brothers is shuffled into the background, and even the inciting incident that separates them seems to be ignored past a few moments. One moment they’re the best of buds, the next time they meet Tiejen and his brother are completely different people. I get the IDEA of what Kiefer was going for, but he spent so much time doing slow motion battles that we never got to see the progression of HOW the two brothers became who they were. Something that deeply undercuts the message of the film, even if it IS a bit melodramatic.

Performances are mediocre at best, with Ethan Lee and the rest of the cast giving a slightly soap operaish performance ,with Peter Ho being the only standout. As the younger brother, Lee is almost dead pan and his “honorable” ways make very little impact on the viewer. Ho, on the other hand, is vicious and incredibly charismatic, almost to the point that you forgive his more vicious underpinnings due to how sympathetic and REAL he seems. His performance as Tiejen is the highlight of the film, but sadly his energy and excitement don’t transfer to his foil, making the brotherly relationship seem hollow at best. 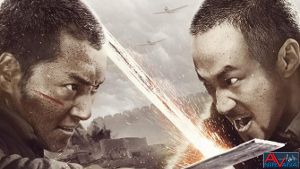 Kiefer Liu has made the video a post production video fest, drastically changing all aspects of the film to a black and white production (or more accurately, gray and white) with soft tweaks here and there punctuated by bright splashes of garish red blood (with the occasional neon light to accent the red blood) to create a near Sin City replica in Asia. Kiefer video obsession is a mixture of good and bad. Some of the black and white shots look simply stunning, but the CGI levels is pretty weak (a given for most Asian produced films, they put more budget into costuming than CGI), and the compression issues that the Well Go USA disc suffers from ranges from crush, to digital noise that gets almost smeary when it focuses on certain faces. Contrast levels fluctuate up and down, and sometimes you can almost see where the characters are superimposed over CGI backdrops. It’s an awkward look, but one that looks fairly decent most of the time, and the visuals can be utterly distracting.

The peak of the entire DVD presentation is easily the 5.1 Dolby Digital Mandarin track. It’s aggressive, loud, and POWERFUL in the LFE department. I did notice that it was cooked a good 4-5 Decibels over the normal listening volume, and I actually had to turn the track down a bit. After level matching, the track is still quite the crowd pleaser, with heavy bass, good dialog and a pretty hefty immersion into the copious battle scenes. Some of the mains and score activity feels a bit “thin”, but that’s a minor issue, as the rest of the track makes up for it with the sounds of artillery fire, or the clashing of steel blades ringing around the listening position.

Brothers is an interesting concept, and being a person who LOVES Chinese cinema, I was rather let down with the whole experience. The stylistic choices were intriguing enough, but somehow they dominated the entire film at the detriment of the actual story and pertinent character development. Well Go USA’s DVD release is rather light on the extras, and sadly the visual choices combined with some excess compression render the DVD’s video score a bit lackluster as well. The audio is quite good though, but still not enough to make Brothers much more than a curious rental at best.