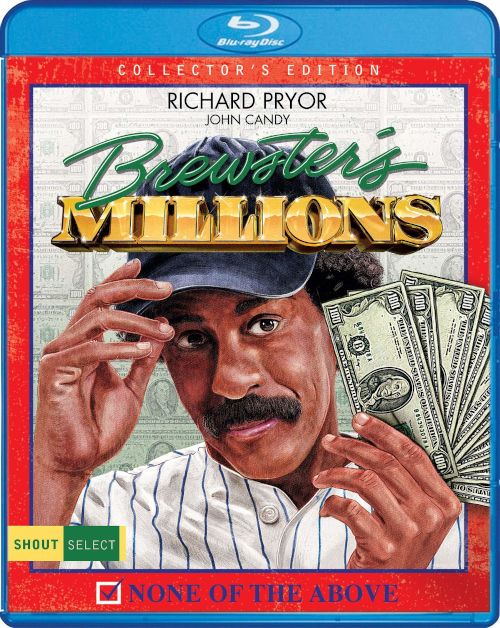 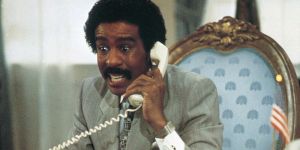 Movie
Director Walter Hill is known for many things, but his interest in comedies is not usually one of them. We mostly see him directing action movies like 48 Hours, Streets of Fire, Red Head and even the Stallone blunder known as Bullet to the Head, but a full blown COMEDY from the man is one in a million. That that particular one in a million for Walter Hill was 1985s remake of Brewster’s Millions. Brewster’s Millions is a movie that’s been made and remade nearly half a dozen times, adapting a timeless tale from George Barr McCutcheon’s 1903 novel about a man having to spend his entire fortune to gain a bigger one. The original novel has been made into a film a total of 6 times already, once in 1914, again in 1921, as well as 1926 and 1945. Each time taking a different social setting and putting the typical protagonist into the need to blow a whole ton of cash to learn a valuable lesson. Walter Hill’s remake back in 1985 was the last time the movie was officially remade, BUT director Richard Townsend has been in development with ANOTHER remake that has been brewing sine 2015 (which could explain why both Universal and Shout Factory have released the film on Blu-ray twice in the last 2 years).

Still, I kind of wonder the need for Shout Factory to re-release Brewster’s Millions on Blu-ray being that Universal JUST released the movie back in 2017. Don’t get me wrong, I love what Shout Factory is doing with these collector’s editions, but usually they wait a handful of years after a major studio has released a film before fluffing it all up with new extras and sometimes a new transfer. Looking at 2017 Universal release this is even more puzzling. The video encode didn’t get a new remaster, the audio is exactly the same, BUT, we actually get extras with the film for once, as well as the 1939 version of the film as a separate extra, which is a nifty addition. I guess with the remake getting closer to being finished (at least according to the rumors that I’ve seen) may be the reason, but this and the Universal release are very similar except for the extras

The tale is one that is so simple, and so incredibly copied in the cinematic world. Monty Brewster (Richard Pryor) is a washed up old pro baseball player who has squandered what money he made in the big leagues on wine, women and fun. Now he’s aging past his prime and playing for a semi pro team out in the sticks of New Jersey until he comes into an astonishing situation. His great uncle Rupert (Hume Cronyn) has just died, leaving him with an INCREDIBLE fortune………..with a catch. Monty is given the option of taking $1 million in cash right now, or play a bit of a game meant to teach the squandering nerdowell a lesson. If he declines to take the $1 million cash settlement he gets $30 million dollars, with the stipulation that he spend ALL $30 million in 30 days, at the end of he will gain $300 million. BUT, he must spend it all, not keep a penny’s worth of assets, AND he can’t tell anyone about the reason on why he’s blowing so much money indiscriminately. 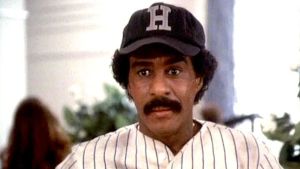 Seems easy, right? Well, spending $30 million in 30 days is a bit harder than it looks, and soon Monty is up to his eyeballs trying to get rid of the money. His financial advisor and bookkeeper Angela Drake (Lonette McKee) thinks he’s a rich pompous jerk, his best friend Spike (John Candy) thinks he’s insane, and every person in New York wants a piece of the seemingly overly generous Mr. Brewster. However, the law firm that handles the money has other plans, because if he fails the game, Brewster sacrifices all $300 million, which will go to their firm. Sneaking in a spy of their own, their goal is to trip Monty up as much as he can in hopes that they can keep him from blowing his money away.

Brewster’s Millions has always had a place in cinematic history, but never was a period like the 80s more poignant to a movie’s plot than it is here. The 1980s was a decade of excess, with natural wealth a decently common thing back in the booming Reagan era. People may always talk about yesteryear having it better than today, but the 1980s truly was a time of decadence and excess. Films like Robocop satirically jabbed fun at the corporate greed, and we even had a film where Michael Douglass summed up the entire 1980s with the line “Greed is Good”. Watching the exuberance and sheer lunacy of the concept play out during the 80s is more than a bit ironic, and actually fit in with the time. While winning $300 million seems like a lot today, that was the equivalent of nearly a billion dollars, and idea of such a prize is tantalizing to someone of any era. The movie itself is fairly thin on plot, and plays things fairly quiet compared to much of Richard Pryor’s work, but it’s a fun little film that still hits home today. What would we do with untold riches if we had access to it. The movie doesn’t try to dig too deep, but just has fun with the comical nature of trying to blow that much money that fast, and uses star power to do so. John Candy and Richard Pryor are front and center, but there’s a whole line up of actors who made big names for themselves. Stephen Collins before he became the dad on 7th Heaven, Rick Moranis in a small roll, Jerry Orbach before he became the face of Law & Order, the late Pat Hingle and of course, Hume Cronyn. 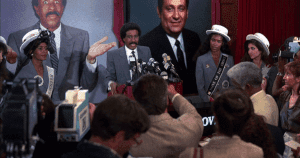 Comparing the 2017 Blu-ray release side by side with the 2020 release from Shout Factory, I would have to say that they are using the exact same master that Universal used 2 years ago. Which means to say, we’re looking at a very pleasing transfer. The colors are warm and vibrant, and the details levels are exceptional for the most part. Grain level appear to be mostly there, and while I detect faint hints of smoothing, this is NOT an abomination like many of the old Universal titles used to be. There’s some dimmer shots which don’t always look great, and I noticed some strange crushing of blacks in the scene where Brewster walks out of the hotel and tells the doorman he’s broke, but other than that it’s a very stable looking picture. You can see the pock marks and creases on Richard Pryor’s face, as well the stitching on his ragged Cubs uniform. It’s an overall great looking catalog release and Shout Factory has done just as good a job as Universal at replicating the master. 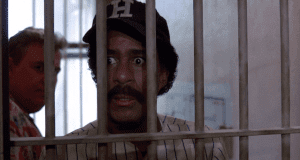 Now the one weak section of the Universal was the mediocre audio quality, and it looks like Shout Factory was given the same mediocre audio stem to make their 2.0 DTS-HD MA track from (which is virtually identical to the 2017 Universal release). Now the audio isn’t horrible by any means, but it’s a very flat and dull mix. The vocals are recorded a few notches below the score and sound effects, while feeling muddled and dirty. There’s no major hisses, or crackles or whatnot, but the audio is just not that life like and vibrant. Vocals are clean and clear, but never full and rich if you know what I mean. It’s a very decent track, but never really rises above that level of being “decent”. I can’t fault Shout Factory for this one though, as Universal used the same mix and seems to have provided the boutique studio with the audio and video masters to use for the release, which means it’s about as good as we can get for the time being. 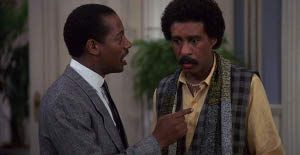 Brewster’s Millions was one of my favorite films growing up, and while it’s not the best of 1980s comedies, it’s still a highly enjoyable film to date. Walter Hill gives the film a very laid back pace, letting the insanity kind of wash over the viewer and slide right off the audience’s back as Richard Pryor schmoozes his way through the film. Shout Factory has done a solid job with the audio and video specs considering that Universal gave them the masters and no restoration was done, and the new commentary is actually really worth checking out. STILL, this is a tough sell for upgrading if you have the 2017 release. Both releases sport the same audio and video encode, with the new extras being the only real reason to upgrade, and that’s not the greatest upgrade in my opinion. HOWEVER, if you don’t own the film yet, then the Shout Factory release is the most feature rich and a solid contender for a purchase. Fun watch is my personal recommendation.

Thanks for the review. I can't remember this one so will check it out.

Thanks for the review. I really liked this one when I saw it many years ago.

I loved this movie as a kid