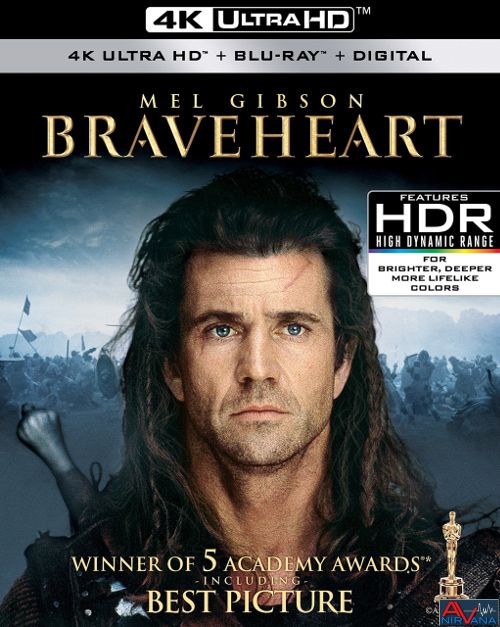 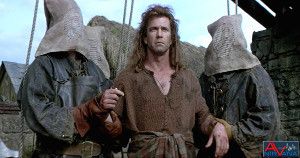 Movie
There are very few films that I claim perfection, but Mel Gibson’s sophomore directorial work just so happens to be one of them. By 1995 Mel Gibson was a household name. We’d watched him as Mad Max, Martin Riggs, and many more, and his box office draw was unmistakable. He had made a small film by the name of The Man Without a Face 2 years prior, but it wasn’t until he took on the undertaking of telling the story of William Wallace that he started make waves behind the cameras. Braveheart was smash hit, and just like Gladiator, swept the Academy Awards ceremonies, taking 5 awards home including the coveted “Best Picture” trophy. I’ve watched the film at least 2 dozen times over the last 23 years (I make it a personal mission to watch it at least once every year, and usually ends up being twice) and have collected the VHS, the DVD, the Special Edition DVD, the Sapphire Series Blu-ray, and now the 4K UHD and each time I have been mesmerized by the 3 hour epic.

In the early 1300s Scotland was under English rule. The king of Scotland (the figurehead that he was) has died without a male heir and Edward Longshanks of England decides to step in and take direct control as King of Scotland as well. This naturally doesn’t rest well with the already oppressed Scots, and soon discontent is even stronger as Edward Longshanks tries to out breed the surly Scots with English bred halfbreeds by instituting “Primae Noctis” (an old law that allowed the lords and nobles of the land to have “first night” privileges with any common folk on their wedding night. Young William Wallace (Mel Gibson) has been orphaned thanks to the chaos and fighting that brewed years earlier, and he just wants to be left alone from all of this insanity. Marrying his childhood sweetheart, Murron MacClannough (Catherine McCormack) in secret to avoid Primae Noctis, the two live their life out of the eyes of the public.

This changes overnight when some of the king’s soldiers try to assault Murron, spurring William to come in and lay down the law on the soldiers. Sadly Murron is captured in the struggle and executed by the magistrate in hopes of drawing out Wallace for capture. Unfortunately for the magistrate, his plan works, as William Wallace comes out with a bloody vengeance. Now on the run, Wallace is dodging the figurehead clan leaders AND the English, but his close knit clan members and societal outcasts soon form an army behind him that will shake the powers that be down to their very foundations. An unwilling leader, Wallace is able to grow even larger, pulling in a crazed Irishman named Stephen (David O’Hara), his childhood friend Hamish (Brendan Gleeson), and the shaky support of several clan leaders, his army stands in the way of the English and their imperialistic control of Scotland. 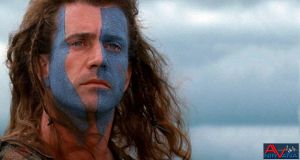 Braveheart is not only one of my favorite films, but also one that I think is much more complex and impactful than most people thought back in 1995. Back then the movie got a lot of flack from parents for being brutal and bloody (Mel Gibson’s battle scenes are always rough and brutal, just watch Hacksaw Ridge for confirmation of that), but there is a sense of purpose there. He infuses a love story with a sense of sheer brutality amidst war to create a sense of humble respect for a man who has given up all for love. Wallace is a generally peaceable man, and really, he wants to be left alone. But when his wife’s throat is slashed publicly just to draw him out, his grief and anger cause him to give up all of his peaceable trappings to bring justice to her death, and ultimately lead his country out of the oppressive state that it is in that allowed for his wife’s sacrifice to even exist.

The movie is wonderfully shot, with fantastic battle scenes that show Mel Gibson really has an eye for camera work. However, the movie is not just lovingly shot, but cast impeccably too. Gibson is on top of his game during this point of his career, and he chose his cast mates wisely. Brendan Gleeson is fantastic as the hulking Hamish, and David O’Hara is a fan favorite for his portrayal as the mad Irishman. However, this is not just a film with quirky characters as it’s main draw. Gibson has done an excellent job behind the camera as well, crafting a multilayered story that infuses elements of action, drama, romance, and political intrigue into a movie that lasts just 2 minutes shy of 3 hours, yet feels barely longer than 2 hours. The first act is soft and warm, with Wallace in his lady killer state, but after his love is murdered, turns into an epic adventure that reminds me of a Scottish “swamp fox” (the character that inspired Gibson’s later movie The Patriot), but climax’s in a down and dirty political drama that ends about as tragically as one might expect (no matter how many times I’ve seen the movie, the final 20 minutes or so when Wallace is betrayed is one of the hardest scenes to sit through, even though I know what’s coming). To put it simply, Gibson created a masterpiece that has stood the test of time, coming up on a quarter of a century old and still having as much of an impact on viewers as it did during the mid 90s.

Wow, just like Saving Private Ryan, Paramount has outdone themselves here. I haven’t seen word of any brand new remaster done for it, but Braveheart in 2160p is just mind blowing. THIS is how I wish every catalog title would look in terms of improvement! The film has always looked great on Blu-ray, but it looks just spectacular here. Comparing the two discs side by side there is no way on earth you couldn’t mistake which one is the Blu-ray, and which is the 4K UHD disc. In comparison, the Blu-ray looks overly brightened, which gives way to slightly pasty looking skin tones and colors that look a bit washed out. The 4K UHD, on the other hand,, sparkles in the sun, with vibrant colors and rich tapestry of different textures that will leave you breathless. The use of HDR seems to have taken the overly brightened look of the Blu-ray and darkened it just a bit, but only in the places where it counts. There is no sign of crush or other artificial darkening techniques, leading me to believe that the boosting was done in the processing stage of the older disc. Skin tones are magnificent, and the colors are just so intense with the added HDR (without being overly sharp and gaudy). The greens of the highland plain stand out with pinpoint precision, and the red and browns of Wallace’s cloak contrast nicely with the bright blue face paint that he’s so visibly known for. Talking about the paint, the detail level on this disc is just striking. You can see the paint literally flaking and caking on his face, with individual hairs pushing their way up through the covering. Stone walls are much more nuanced and revealing of those little details, and the overall clarity of the disc is just superb. Simply put, this is pure and utter eye candy for fans of the movie. The 35mm film stock is great shape, and there is a nice thin layer of grain over the whole movie, giving it a distinctly organic look that makes me just salivate thinking about it.

As I mentioned in my review of Gladiator, it’s interesting to see a studio use two competing audio encoding methods in their film library. As Gladiator was released with a DTS:X track, Braveheart follows suit with Saving Private Ryan and delivers the goods with Dolby’s Atmos technology. I’ve always loved the 5.1 TrueHD mix for the Blu-ray, but this Atmos track kicks things up a notch and really invigorates the audio experience. The added speakers and extra bandwidth gives the track a lot more breathing room, which in turn creates a much more encompassing feeling. The music swells and wafts through the movie, as light and airy as a bird, while the Low end is punchier and much more substantial in terms of nuanced tones. The clashing and bellowing of steeds during the battle sequences sound like they’re right around you, and the clarity and precision of the dialog is spot on. Upon comparing the two tracks, the overheads are actually used way more than I thought they would, adding in sounds of horses tumbling over soldiers, adding some directionality to arrows shooting overheard, and wrapping in the score to the mix to create one of the most impressive uses of the technology on a catalog title.

I’m honestly surprised at how quickly Braveheart moves considering it is only 2 minutes shy of 3 hours long. It’s enthralling, intoxicating, exciting, and completely heart breaking at the same time. Mel Gibson’s finest directorial work was only his second, but it is one that has stood the test of time, and 23 years later holds up just as well. He was on top of his game acting wise, right on the cusp of his directing career, and he just nailed it. Braveheart will ALWAYS be on my top 5 list (no matter how hard the last act is to get through, emotionally). Paramount hasn’t given any new extras to the package, but they certainly did right by the film where it counts. The audio and video are both stunning and I have to give this the recommendation of Must Buy. Do not go past go, do not collect $200. Buy the disc.

Thanks for the review. Great movie to have.

Sheesh, with that review and recommendation who am I to say no? I’ll be adding this to my library. Thanks for the review Mike!

If I don't win this in the AV NIRVANA Give Away, it will be my next 4K purchase.

Thanks for a great review.