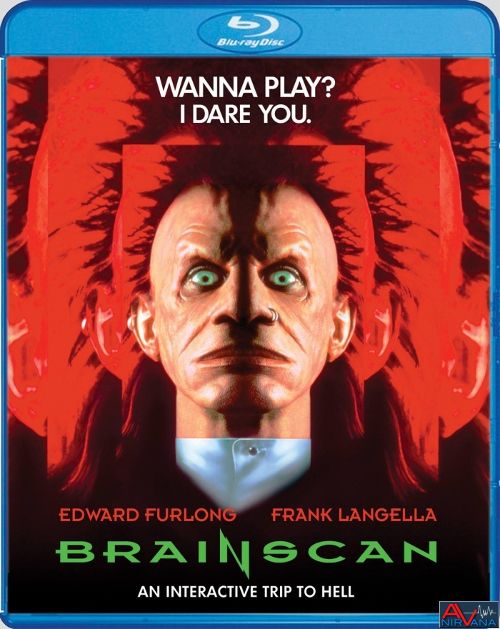 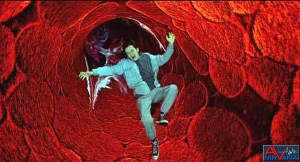 Movie
I have some rather fond memories of watching Brainscan back on late night HBO binges back in my teenage years, many years past when it sputtered onto the theatrical horror scene. The film really is an awful film from a technical standpoint, relying heavily on dated CGI and bad horror tropes, but has earned itself a cult status niche on home video over time. The 90s is widely considered the time when horror started to die out (at least for me personally) and the copious amount of horrible sequels for established franchises was the norm. Brainscan was actually a small blip on the radar back in 1994, but it was also at a time when most of the big boys were petering out. Mike Meyers was dead, Freddy and Jason were pretty much gone, and all that was left was weak sequels to the Chucky movies and a few “flash in the pan” serial killers like Candyman. The time was ripe to put in a NEW master of evil, and that is where the introduction of the Trickster came into play.

Michael (Edward Furlong) is your average, every day, high school loser. He’s a misfit who hangs around with his best friend Kyle (Jamie Marsh) watching horror movies and being a peeping tom to his next door neighbor Kimberly (Amy Hargreaves). That is until he stumbles upon a new virtual reality game called Brainscan that promises to be THE leader in horror gaming. When he gets the game he dives right into the virtual reality world, playing a murder who hacks and slashes up a victim. Thinking it’s just part of the super realistic game, Michael is all excited, only to come out of the virtual reality set and find out he has a hacked off foot in his freezer. Realizing that all that he experienced in there was REAL, Michael decides to ditch the game, only to be confronted by cyber demon, Trickster (T. Ryder Smith). A being who has Michael by the hairs of his head and forces the teenager to continue playing the game and murdering people as he goes.

A deadly game of cat and mouse, Michael continues to play the game, slaughtering more innocent people as he goes, but continually looks for a way out. Hot on his tail is the suspicious detective Hayden (Frank Langella), who has more than a few suspicions about the young boy’s motives and whereabouts during the murders, and if the Trickster doesn’t take his soul at the end of the day, he will take the boy to prison. 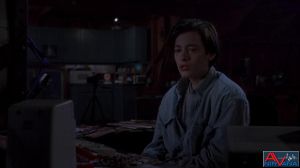 Brainscan was one of those films that really started to capitalize on the advent of new technologies that the movie world really didn’t understand. It’s right at home with films like Hackers, Johnny Mnemonic, and The Net for sheer ludicrous takes on the internet and virtual reality, but it does so in such a cheesy way that it’s almost a nostalgic joy to watch the film. This time it’s about virtual reality in video gaming, opening up a new avenue for fear of technology to override logic. A little tidbit of info about the film. The character of the Trickster was actually not written in to the script until much later in the production. My guess is that he was chosen as a new “master of horror” to replace Jason, Freddy, or the other evil monsters that had their franchises fizzle out in the early 90s. Ryder plays the demented demon quite well, and it’s actually his twisted humor that adds a lot of the enjoyment to the film.

The film wasn’t really well received back in 1994, and the movie didn’t do a whole lot of money at the box office either. However it gained some notoriety back in the DVD days as one of those “lost” films of the early 90s. The acting is simply abysmal though, as the studio heads were coming off of Edward Furlong is a “thing” mentality due to his popularity in Terminator 2. The years between 1992 and 1995 had Furlong in a few roles, and most of them were so painfully received (the kid couldn’t act) that it cemented his demise in the acting community. Ryder was the standout actor as well as Frank Langella (who’s nothing more than a slightly enhanced cameo), with the rest of the actors being first timers. This adds to the charm of the film with a sort of “rough and raw” feel to it that fits the culture of the time, and the slapdash nature of horror films.

Rated R for strong violence, and for language and some sexuality 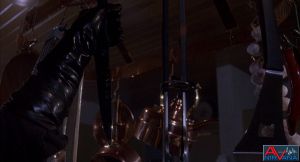 Scream Factory hasn’t announced a 4K or 2K master for this set, so I’m assuming that the master used for this edition was a pre-supplied master for them and not a new effort. Still, the results are quite pleasing, as the cheap 90s film looks great on Blu-ray. The outdoor shots really benefit from high definition, showing off great clarity and a really nice grain layer that makes the disc looking stunning at times. You can see the individual sweat droplets on Edward Furlong’s face (he seems to sweat like a water fountain in the movie), as well as intimate clothing and background details. The darker scenes are a bit less brilliant, and have a tendency of smearing ever so slightly on fast motion in the dark. Grain levels also spike in the dark, but still provide plenty of shadow detail to the naked eye. Skin tones are natural, and the darkness of the film doesn’t rob it of any major details. All in all, while this may not be a brand new scan, the Scream Factory disc is really good looking. 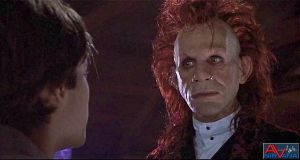 As with the video, the 2.0 DTS-HD MA stereo track for Brainscan is very nice. Surprisingly nice in fact. I was expecting a rather mediocre 2.0 track (as is the case with a lot of cheapo 90s horror films), but the mix is actually rather rich and aggressive. There’s some mild LFE built into the 2.0 track that adds some thump when the video game VR “access point” is activated, the front sound stage is decently spacious and wide. Vocals can be heard cleanly at all time, and the Nightmare on Elm Street inspired score is rich and potent enough to be more than acceptable.

Brainscan is one of those “so awful that it’s good” type of 90s schlock films. No one should expect any true “scares” from the movie due to the cheese dripping from every corner, but it’s an insanely fun watch if you go into it with a MST3K mentality. The special effects are cheap 90s fare, the acting proves that Edward Furlong doesn’t deserve to be NEAR a camera outside of Terminator 2, and the plot so cheesy that you can almost taste the cheddar coming from it. Scream Factory has done a bang up job with this release, making it a collector’s edition in all but name only. The scan is good, the audio great, and the thing is jam packed with more special features than many of their Collector’s Editions. Recommended as a fun nostalgic watch.

Thanks for the review. I do like those so awful that it’s good” type of 90s schlock films so will check it out.

That cover art is going to give me nightmares!!!!