BoJack Horseman: Seasons One and Two 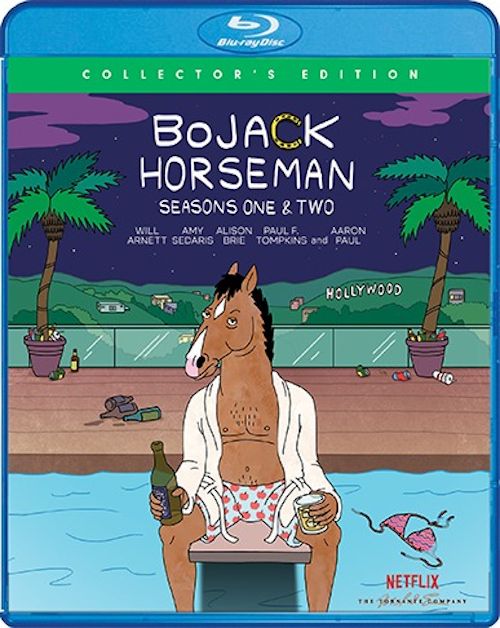 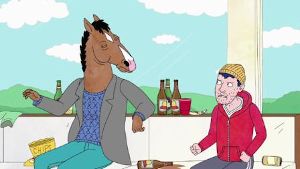 Movie
I was actually really REALLY shocked that BoJack Horseman actually made it’s way to Blu-ray, even if it’s just the first 2 seasons of the 5 seasons released so far. Not because it didn’t deserve to make it to home video, but just because it’s a Netflix original show, and most Netflix original programming (outside of the Marvel stuff) NEVER make it to physical media. Especially after we’ve wait for 5 whole seasons and no signs of Netflix licensing the show out to a disc based distributor. So color me shocked when I see Shout Factory has gotten the big N to give them rights to the first few seasons (and hopefully the rest of the show eventually) to get a big Blu-ray release that comes jam packed with extras.

BoJack Horseman is not your typical animated show. Much like series like Bigmouth, Bojack is a dark and crude black comedy that is wickedly funny, but is insanely over the top at the same time. The series revolves around the titular character, BoJack Horseman (played by comedian Will Arnett), a former 190s sitcom star from the show “Horsin Around” who is living the rest of his life in bitter misery. A hate on for the world in one hand and a bottle of booze in the other, BoJack is just drinking, slumming, and basically killing himself ever so slowly after becoming one of the “normies” once more. The anthropomorphic series features not only the talking horse, but a human ex best friend named Todd (Aaron Paul), and BoJack’s manager/former girlfriend Princess Carolyn (Amy Sedaris) who has a chance for BoJack to get back on his feet with a comeback for the aging star. 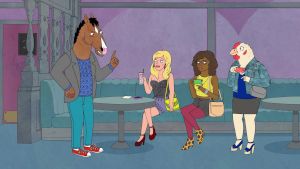 When a publisher asks for a biography about BoJack horseman he jumps at the chance. Assigned to his is journalist/writer Diane (Alison Brie) who has her own problems in life. The series itself is never wildly serialized, but rather goes through the chaotic life of BoJack and his friends in their various ups and downs of relationships, acting gigs, general drunkenness and debauchery that defines the late sitcom star’s crazy life.

BoJack Horseman may seem like just another crude comedy show about talking animals and lots of liquor, but it’s actually one of the more clever social commentaries out there. Taking a clue from South Park, the series uses biting witticism and other the top lunacy to make fun of and criticize many different social morays. The series is actually one of the funnier shows of its type out there, and while the series does get crazier and crazier as it goes along, both seasons one and two are filled with insanity (especially season one).

The boxset from Shout factory is pretty simplistic in structure, but the 25 episodes of both initial seasons are put on 4 different discs and packaged in a nice 4 disc case. Sadly there’s no huge chipboard boxset, but the extras are really nice (TONS of commentaries) and the artwork fits the series to a T, taking it’s cues from the original Netflix background art. 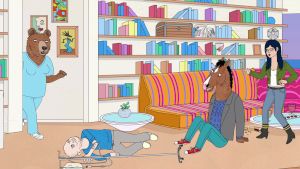 The image quality for the 4 disc Blu-ray set is a bit varied due to the processed look of the digital animation. The spackled look to the characters is intact, and that combined with the slightly processed look can look a bit quirky at times. Detail levels are good considering the simplistic animation design, and the colors pop with a bit of a warm push to them. Primaries are strong, while some of the greens and blues and earth tones are more dark in nature. There’s a few lines and creases that appear to have some artifacting to them, but that also could be attributed to the spackled animation style that the show is known for. It’s a good looking transfer across the board, and while it’s not a series that really is designed to sparkle, won’t displease fans of the show. 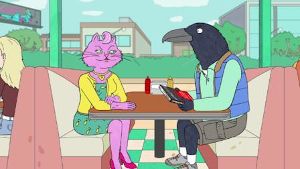 The show is presented in both the typical Shout Factory 5.1 and 2.0 DTS-HD MA tracks, with the 5.1 mix definitely expanding the sound track quite a bit. Surrounds are filled with the craziness of BoJack and his friends, and the extra speakers really expand the score’s presence and clarity quite a bit. There’s some moments where the dialog spreads out into the other speakers besides the center (such as when BoJack is yelling from a side room), but still, the major lifter in this presentation is the dialog. This is a very dialog centric series and said dialog is nice and centered up front. There’s a little bit of LFE action here and there when the show gets boisterous, but those moments are definitely few and far between. The track is clean and clear, and has no abnormalities to my ear. It may not big the biggest and baddest of sound tracks, but it does the job nicely and with no issues to speak of. 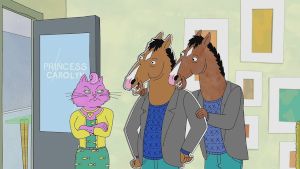 As I said above, I’m actually flabbergasted that we are able to get both of the first few seasons of BoJack Horseman on Blu-ray. I would have liked to have seen all 5 season released so far in a big set, but I guess we can’t complain too much as season 6 is just around the corner and the box set wouldn’t have been complete. Shout Factory has done a great job handling this release, packing it full of some great extras and putting it all on a nicely encoded 4 disc set. The show itself is down right HILARIOUS for those who like “mature” animated shows, and while it’s not for everyone, BoJack Horseman has remained one of the top 10 Netflix shows 5 years running, and for very good reason. Fans of the show will definitely want to grab the Blu-rays, as Netflix has been notoriously stingy with their licensing of original content, and any of their content on Blu-ray is always a good thing. If you haven’t seen the show, well it’s definitely available on Netflix if you want a taste test. Highly recommended for fans.

I must be living under a rock. Never heard of BoJack. Might need to give'm a chance?

Thanks for the review. I saw this on netflix sometime back. Will have to revisit the later seasons.

I am a latecomer as a BoJack watcher, but absolutely love it!

Was blown away by the S5 ending (Netflix) with music by The War On Drugs. A+