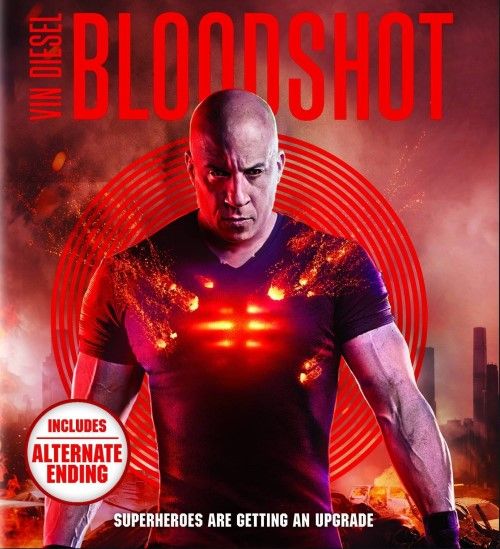 Movie
Most people don’t really realize it, but Vin Diesel is actually kind of a nerd. For all of his muscles and fast car movies, the man has a love of comic books, D&D and other various table top games, and now that he’s worth over $200 million, he kind of has some clout to get some of his hobby movies made. They always say that after an actor has risen to fame do the “one for me, one for the audience” thing with their movies, and Vin Diesel is certainly following that pattern to a T. For ever Fast and the Furious, or other big blockbuster that comes out, he’s adamant about making pet project films like The Last Witch Hunter, Furya (the next Riddick movie), and Bloodshot.

Lets get this straight, Vin’s pet project movies have a lot of heart, but they’re usually small time material that he has to either fund himself (like Riddick), or they’re low budget films that just have to make due with the budget and direction their given. That is pretty much the case with Bloodshot, a comic book movie that has Vin’s hands all over it, but sadly falls prey to low budget concerns and a franchise that will most likely not have a sequel.

Ray Garrison (Vin Diesel) is a Marine killed in the line of duty rescuing a hostage. Waking up on an operating table, he finds out that he has been resurrected from the dead by a corporation called RST who has perfected the art of nanotechnology. He’s now been reborn with nanobots and the incredible ability to regenerate from just about anything, as well as gain superhuman speed and power. The sad thing is, he can’t remember who he was in his former life, until a surge of memories flood back, filling him in on the story. It seems his wife was murdered in front of him, and the though of revenge fuels the super soldier to go and hunt the perpetrator. However, nothing is as it seems, as his handler, Dr. Emil Harting (Guy Pearce) has a few secrets of his own, and the man’s own desires may be manipulating Ray in more ways than he could possibly imagine.

Bloodshot was based off of a comic book hero of the same name, but one that I’m completely unfamiliar with. Usually I have a good handle on most comic book characters before watching the movie, but I went in completely blind to the backstory of the real super hero, and as such was kind of a blank slate. Despite my lack of knowledge, it was pretty easy to see why hardcore fans of the comics weren’t wild about the movie when it was in theaters. We don’t actually see “Bloodshot” until the final moments of the film, and the low budget constraints really kept the high tech nature of the super hero under wraps. The action was a bit stodgy, and the slow motion was definitely over used. Not to mention the very obvious super hero speeches that feel cheesy and over done.

That being SAID, I have a guilty like affair with this movie (not love, like). It’s utter trash on a technical level, but it’s pure Vin Diesel stupidity at it’s finest. If I had to compare it to something, I would say that those who liked The Last Witch Hunter, or I, Frankenstein will get a kick out of it. Sure, it’s utter trash as a film, but there’s enough muscled punches, gunfire and high tech mumbo jumbo to keep me entertained for an hour and forty nine minutes, despite plenty of plot holes and low budgetary issues.

Rated PG-13 for intense sequences of violence, some suggestive material and language 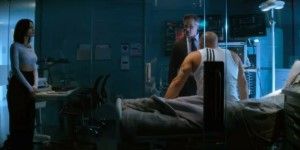 As with the last bunch of digital reviews we have gotten, we were provided the HDX (1080p) variant instead of the 4K stream. As such I can’t comment on the HDR or the enhanced resolution, but from what I could tell of the vudu stream (not going to rate it with a star rating as streaming content can be highly dependent on your available bandwidth) looks phenomenal. It’s a slightly stylized look with lots of blues and grays, as well as a mixture of deep reds. Fine detailing is superb and outside of some artifacts which could be bandwidth induced, the image is incredibly appealing.

Due to being the HDX copy instead of 4K, we get to enjoy a 5.1 Dolby Digital plus track instead of the Atmos track found on the 4K stream. The 5.1 mix is solid enough, with good front presence as well as some nice low end power for the action scenes. Surrounds are wildly active at all times, with bullets whizzing all around but the higher end of the sound spectrum feels a bit “thin”. This is something I’ve heard in several other vudu streams and am rather suspicious that it has to do with the compression method, as the disc variants of the same film are much richer and fuller (again, one of the reasons I’m not rating the stream as it’s dependent on bandwidth.

• (No Extras on the Streaming copy that I screened)

Bloodshot is definitely a problematic movie, and I can understand why it dive bombed at the box office. Still, as a fan of cheesy Vin Diesel schlock, it was certainly entertaining enough as a dumb time waster. The special effects were solid enough (although some of the other super soldiers felt like they were covered in Airsoft or paintball gear rather than special tech), and the paper thin plot did just well enough to move us from one action scene to another. From what I could tell of the Vudu stream, the 4K disc and the Blu-ray should be near reference, as it looked amazing even as a stream. Probably worth a rental for the average action sci-fi junky.

Hmmm.. I am a fan of The Ridick series..

Just watched it and enjoyed it. Sad to see so many thumb it down. Sure it lacked some cgi effects due to budget, but other than that i find it on par with must Hollywood comic based films. Has the traditional cheesy lines, and gallop into the sunset ending.

glad you liked it. I have my own set of films that I like that others hate (I frankenstein and Abraham LIncoln Vampire Hunter being first and foremost)

Michael Scott said:
glad you liked it. I have my own set of films that I like that others hate (I frankenstein and Abraham LIncoln Vampire Hunter being first and foremost)
Click to expand...