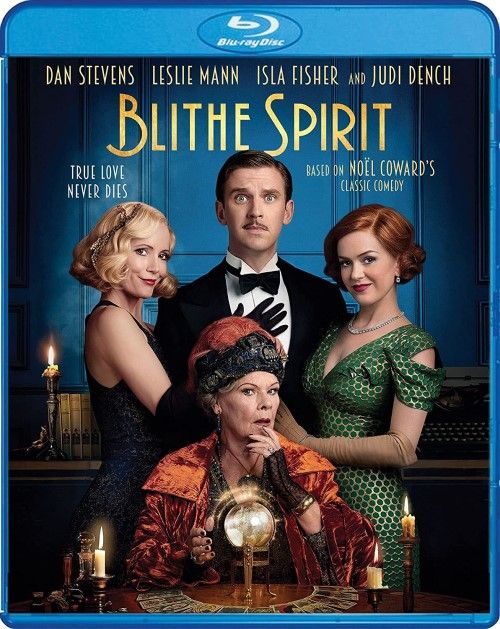 Movie
I vaguely remember going to a production of the 1941 play of the same name back in college with my now wife, but I have almost NO recollection of it. My main remembrance of the story came from the Rex Harrison / Constance Cummings film in 1945, which is a bonafide classic film (and also one of my favorite Criterion Collection discs). But color me a little curious when I see this new remake come up on my radar a year or so ago. The film was SUPPOSED to be released around summer of 2020, then got pushed back to Sept of 2020, and then finally into early 2021. Then it was attempted to be sold to the various streaming sites, but no one would actually take it. Finally IFC productions picked it up (which is weird, as they’re mostly a horror and sci-fi sub label) and Shout Factory released the physical disc this last month. A bit of a twisted road to get out to you and me, but finally here.

The story is vaguely the same as the original, but with some major plot twists and changes. It revolves around a struggling writer named Charles Condomine (Dan Stevens) who is suffering from a MASSIVE case of writers block. He’s neck deep in a movie script that he’s 6 months behind on, and it’s not getting any better. It doesn’t make it any better that the script is for his wife Ruth’s (Isla Fisher) father in Hollywood and that her henpecking ways aren’t exactly help. However things change when he invites a medium (Dame Judi Dench) to hold a Seance (so that he can steal some ideas for his play) and inadvertently summons the spirit of his dead wife Elvira (Leslie Mann).

Elvira is a sassy hunk of female empowerment, and while she doesn’t want to let Charles go, she also makes it VERY clear that she’s wants Ruth out of the picture. Charles isn’t exactly sure what to do as he loves his new wife Ruth, but Elvira was the love of his life years ago. What unfolds is a case of torn love, humorous infighting between said spirit and the couple, as well as an insidious truth about who really was the ACTUAL writer in Charles life (and the reason he hasn’t come up with anything since his wife Elivra’s death 7 years ago).

Blithe Spirit hits the ground running in a witty first act, introducing us to the simpy Charles, the annoying rich Ruth, and a dead spirit who REALLY wants to stick around. The 2nd act stumbles a bit as Ruth and Charles and Elvira go round and round, but it jumps the tracks in the third act with a surprise twist that just doesn’t feel very impactful. The movie teases moments of slapstick hilarity, then brushes them under the carpet, only to bring in serious plot points, and scrub over them just as quickly. The finale comes out of nowhere (especially with Ruth and Elvira teaming up), and once more I feel bad for Dame Judi Dench’s talents being wasted in a side role (she was probably the best part of the movie.

I’ve always felt that Dan Stevens was highly under rated as an actor, and was sad when he dropped out of the A-listers. He showed a lot of promise with films like The Guest, Fifth Estate and Colossal, but he quickly fell off the radar and has been working with low key indie films for the most part. He’s hilarious as Charles, playing the slapstick elements of Rex Harrison’s performance to a T, just with a more simpy and wimpy approach (which fits his character to a T). Sadly the script and the direction undermine both his and Judi Dench’s efforts, and leaves this film as a rather “meh” experience.

Rated PG-13 for suggestive references and some drug material

The 2.39:1 framed Blu-ray is a good looker with a very stylistic approach. It tries to imitate the look and feel of a play, with many of the backgrounds being studio sets vs. live sets or CGI, and the over saturated colors and blasted white levels give it that dreamy old timey look (my only kvetching was that some of the architecture used was OBVIOUSLY not 1930s, but decades in the future). Fine details are generally very good, though I did notice some smoothing around Leslie Mann’s face and some soft diffusion from the over blasted out whites. Some minor banding here and there, otherwise a very textured and detailed looking image.

The 5.1 DTS-HD MA track (along with a 2.0 DTS-HD MA downmix) is a great sounding track for sure. Its vibrant, punchy, and makes great use of the surround field. The opening scene with Charles blasting his music over the phonograph really livens up the sound stage, and various car crashes, rumblings of London etc keeping it active in both the front and rear of the stage. LFE is was conservative but still present, with a few jump moments that lifted you out of the seat (the seance for example). Dialog is front and center for the whole of the film, and I didn’t hear any balance issues at all.

• Behind the Scenes
• Theatrical Trailer

The movie isn’t AWFUl, but it’s in NO way up to the same standards as the play or the 1945 Rex Harrison film (or the 1956 TV movie with Lauren Bacall either). I got a few chuckles out of the film, and actually was enjoying it for the first half of the movie. By the time the 3rd act rushed itself into existence I was having my doubts, and by the end was rather frustrated with how things unfolded. The Blu-ray itself is well done though, so if you’re a fan then you should be happy. However, I’d leave this as a rental for anyone else on the fence.