Blade of the Immortal - Blu-ray Review

Blade of the Immortal 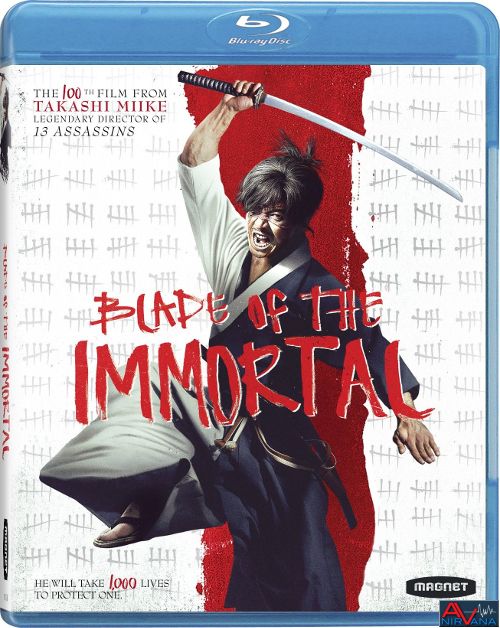 Movie
Takashi Miike is one of the most prolific and bizarre directors to come out of Japan, and what better way to celebrate his 100th movie than with the iconic Manga series, Blade of the Immortal. Miike has changed and adapted over the years, but at his core he is still the man who put out the exploitation bloodfest Ichi the Killer (which is actually getting a 4K scan and coming out from Well Go USA soon), but he is also the man who has put out historical epics like 13 Assassins, or The Great Yokai War or Ace Attorney. He’s a man that wears many hats, and while he has shown a penchant for being the Japanese Tarantino, he can change and adapt to a myriad of different filming styles when needed. Blade of the Immortal has been a film I could not WAIT to see, as I grew up reading the Manga and was excited for Takashi Miike to put his own unique flair to the source material. While the movie has some small issues (namely in being overly long like most of Miike’s films), it is a bloody BLAST to watch and had this reviewer giggling like a 12 year old school girl while limbs were lopped off, and more blood was spilled than most wars put together.

Starting out the film with spurts of blood and death screams, we watch a samurai named Manji (Takuya Kimura) cut through a handful of government officials like they are butter. Severing limbs and impaling bodies, he tears through them like paper (all shot with a classic black n’ white veneer, reminiscent of Sword of Doom in many ways), only to come face to face with a young girl, who just so happens to be the wife of one of the officials he is slaughtering. It turns out that this girl is his sister Machi (Hana Sugisaki) and his bloody rampage has turned her mad with grief. Vowing to protect his sister, Manji ends up failing her, only to wreak hellish vengeance on the 100 men who took her from him. Wounded and on the verge of death, Manji is ready to accept the sweet release, only to be thwarted by a mysterious ancient sage who gives him the holy blood worms (!?), which give him the ability to heal from any wound. Effectively rendering him immortal.

Fast forward 50 years and a ravaging force is sweeping Japan. A mysterious martial arts sect known as the Itto Ryu are challenging dojo’s left and right, killing whom they defeat, and the gaining followers on the mantra that tradition is dead. Only strength and power survive. After young Rin (also played by Hana Sugisaki) watches her mother get kidnapped and her father slaughtered in front of her eyes, vows to hunt down the Itto Ryu, and kill their leader Anotsu Kageshisa (Sota Fukushi) in revenge. The only thing is, she’s a young girl, and the Itto Ryu are martial arts masters. When the same ancient sage whispers some directions in her ear, Rin sets out to seek the man who can’t die, Manji himself, to be her bodyguard and instrument of her revenge.

And so, Manji and Rin set out on their quest for revenge, coming across individual Itto Ryu members, and carving them up like sushi until they can find the head of the snake. Just like the manga, each Itto Ryu member is completely unique, making their fight scenes memorable and different as the 2 hour and 21 minute unfolds. We have a mysterious monk with similar powers to Manji, a burn victim who carries severed heads on his shoulder, and a musical geisha like character with a conflicted spirit about her mission. Sadly, I think Takashi Miike took TOO close a take to the source material in many ways (although there are some steep deviations, such as having to kill 1,000 men to gain his mortality back). The series is very episodic at its heart, with each manga chapter dealing with a different Itto Ryu bad guy, and when that bad guy is dispatched, we move on to the next one. The same thing happens here, with Manji coming across bad guy after bad guy, dispatching them and moving on. You can almost see the breaks in the manga as they happen on screen, so it feels a little less fluid than it could have been.

Most of the movie is just a gloriously blood assault, with Manji spilling so much blood that even the most avid gore hound will be satisfied. Takashi Miike is having a blast with the mixture of period piece epic, anime, and bloody exploitation film, and I did as well. The film is not high art or has a great deal of Robert DeNiro level Oscar worthy portions, but there is a surprising amount of dramatic tension as well. Especially when Rin starts to contemplate just what her journey of vengeance is doing to people around her. The nuances of looking in depth at the heroes and villains of the story is well done, even alloying you to understand just what makes each person tick. The villains start out as unforgivable monsters, but during the second half there is a goodly amount of character development that lets us semi-sympathize with Anotsu gaining some facets during the movie’s run time. The same thing goes for Manchi, who starts out seeming like a brutal killer with no purpose, but slowly is unveiled to be a bit of of a tragic character who was forced into this path due to his own honor, and the treachery of others.

Rated R for bloody violence and carnage throughout

Blade of the Immortal was shot by long time Takashi Miike collaborator, Nobuyasa Kita with Arri Alexa XT cameras, and even though this is a digital shoot, he makes it look EXTREMELY filmic. The movie opens up with a serious of intricately shot action sequences that are filmed in classic black and white, and even though it’s a “day for night” shot, the 10 minute sequence just looks so incredibly textured and classic. I got a really strong Sword of Doom feeling from that particular shot, but once Manji gets the blood worms, the shoot colorizes and takes on a very unique period piece feel to it. Blade is given several overlapping color grading styles, with soft greens, and light browns dominating the shading to give it a sort of dusty and sandal worn look to it. However, bright primary reds, such as bloody goo, pops off the screen, as does the white and black of Manji’s robe. When lady Hyakurin comes out with her full costume, the purples and red and yellows pop with exquisite sharpness, and the whole film in general is amazingly sharp. Blacks are deep and inky, with 99% of the time spent in daylight shots, keeping pesky crush or banding to a minimum. Simply put, this is an awesome looking film, and the highly stylized use of period piece Edo drama, with anime makes for a luscious looking home video release.

Just like the video, the audio is quite a treat as well. Magnolia has given us dual 5.1 DTS-HD MA tracks, one in English and the other in Japanese. The English dub is oooooooooooook, but the Japanese track feels more organic and nuanced with the dialog. The 5.1 mix is simply amazing, with lots of sonic directional shifts as the action swirls around the sound stage, and lots and LOTS of screaming coming from every direction. Bass is a bit softer than I expected, but still adds a good amount of low end for the thudding horse hooves, or the impact of people crashing through bamboo walls. The dialog is crisp and clean as can be, with the guttural Japanese vocals coming through the center with pinpoint precision. One of the coolest parts of this track is listening to the panning effects throughout the front stage as they move and change as Manji darts from one end of the screen to the other. Again, I have to say it. This is just a fantastic audio mix for home theaters.

Blade of the Immortal is just a whole lot of bloody fun. For those who enjoy a mixture of Tarantino and anime mixed with some period piece Samurai vengeance, it’s a just a bloody disgusting good time. The action is amazing, and the cinematography simply mesmerizing. The film does push on a bit too long (a staple of most Takashi Miike films), but it is a wonderful film to celebrate Takashi Miike’s 100th entry into the film database. The Blu-ray by Magnolia looks and sounds amazing, but once again we’re given fairly minimalist extras (although not as slim as some others of recent watchings). Highly recommended for those who love a bloody and twisted revenge tale, or just those of us who can’t get enough of Takashi Miike.

Thanks for the review. Will definitely check this one out.