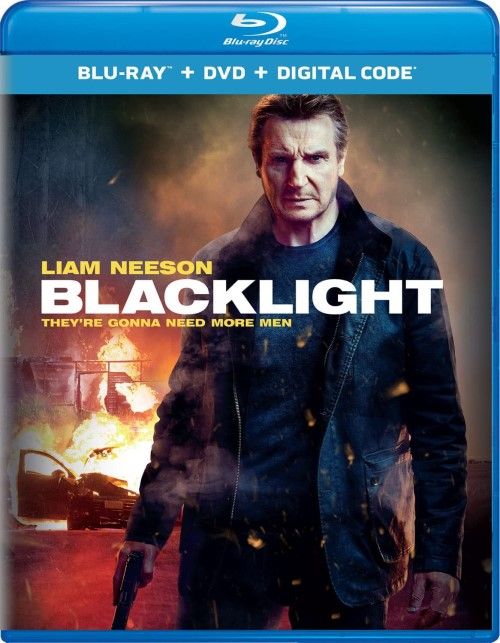 Movie
I have a particular set of skills. Skills that make it easy for me to remake the same movie over and over and over again, until my career ends.

Liam Neeson was once one of the biggest movie stars of our time. He was in everything from a Batman movie to swinging a sword in period piece dramas. He even got a rather large resurgence about 15 years ago when he starred in Taken. But as is the case with a lot of aging stars (he’s turning 70 soon), Neeson is content with pumping out DTV movie after DTV movie, playing the same battle weary hard case with a “particular set of skills” ala Taken. He’s not like Bruce Willis where he would show up for 10 minutes for a quick payday and then vanish (although, with reports of his Aphasia, it may have been all Bruce could muster), but he’s pulled the Jean Claude Van Damme/Steven Seagal route of replaying the same tired old good guy who can kick butt and chew bubblegum (but of course is all out of bubblegum) over and over again with cheap production values, and even cheaper dialog.

Blacklight is basically as cookie cutter as you can get. It’s an amalgamation of dozens and dozens of other action movie tropes, all rolled into one film as if Director Mark Williams (who also directed the Liam Neeson actioneer Honest Thief) just was checking off a specific check box in the “how to make a low budget action movie” how to book. Queue up the tough, but aging, action hero who finds an injustice in his job. Add in some gun fights, a chase on the freeway, some quick cuts to hide the fact that the aging boxer is having a harder and harder time with the fight scenes (not gonna blame him at 69), and an intrepid reporter who gets pulled into a game of mysterious intrigue and government over reach.

I’ve noticed that Neeson movies always have a “bent” to them lately. Steven Seagal used to always do movies with environmental issues at the heart of it, while Neeson seems to love to take scripts that have social inequity issues. A guy chasing an immigrant kid for no reason, a government out of control killing it’s own citizens, a political message thrown in for good measure. Here it’s the government out of control shtick. Neeson is Travis Block, a man who has spent his entire post military life being a “fixer” for the FBI’s head of special operations, Gabriel Robinson (Aidan Quinn). He’s basically an off the books operative who has a special set of skills, and pulls special agents out from deep cover when they need it (both mentally and physically). He’s also got a family that he wants to spend more time with in his golden years. However, he’s got a few “quirks” that keep him from being a normal man. He suffers from actual clinical obsessive compulsive disorder, and it has alienated him from his daughter and grand daughter, while at the same time making him an exceptional agent.

One of his agents is pulled from jail only to find out that this agent Crane (Taylor John Smith) has grown a conscience and is going to tell reporter Mira (Emmy Raver-Lampman) that the FBI is killing innocent civilians. At first Block doesn’t really believe that the people he’s spent his life working for would do something like that, but once Gabriel’s men kill Agent Crane in front of him and kidnap his family, the craggy old fixer does what he does best. Get stuff fixed in an explosive manner.

As I said, Blacklight is pure cooker cutter “meh”. It’s not a HORRIBLE movie, but it’s bland and derivative at it’s core. It works fine as a dumb Netflix film when you have nothing to watch, but there’s nothing really exciting, interesting, or even that crazy about it. The film is filled with low budget dialog, low budget action sequences, and is only really saved by the fact that Neeson is good enough that even phoning in a part is better than everyone around him. Even Adian Quinn hams it up a bit as the criminal boss of his.

The digitally shot 1080p picture is perfectly fine. In fact, it’s generally better than fine. The image can be fairly neutral with outdoor shots, and inside of homes we get a more cool blue (such as when Block and his boss have their mansion confrontation). Fine details are generally REALLY good, with us able to see every craggy feature on Neeson’s age face, explosions, and general background details without problem. Blacks can get a bit hazy (that cool blue mixed with digital shoots sometimes does that) and banding does show up from time to time as well. Skin tones look natural though, and without any MAJOR flaws, it’s a great looking disc that doesn’t exactly stun the audience, but will do VERY nicely.

The singular 5.1 DTS-HD MA track is just like the video. Good, sometimes great, but never really something that will truly wow the audience. John Scoggins sort of “play by the numbers” score fills out the surrounds, as does the rumble and excitement of several car chases and battles (especially the already mentioned mansion fight). Dialog is crisp and cleanly located up front, bass is punchy, but also I noticed not wildly tuned to anything but a single note. Meaning there’s actually quite a lot of bass in the movie (for an action movie like this, it’s a necessity), but it’s VERY single notish, and sounds like the same weighty tone from beginning to end. Good track, sometimes great, but never truly stunning.

• Behind the Scenes
• Shooting Blacklight

Is it a bad movie? Oh yeah. Could it be worse? Oh yeah. At the end of the day Blacklight is just another derivative and forgettable action movie in Neeson’s long list of post Taken comeback. Basically if you’ve seen one of his recent films, you’ll have seen this one. The Blu-ray looks and sounds quite good, but naturally it’s a bit skimpy on the extras. Personally I would just use this for a low grade rental if you’re a Neeson fan, or skip it entirely.

This had the potential to be much more than it was. My analogy for Neeson movies is like a shampoo label--Lather, Rinse, Repeat....over and over again.

Epoxy1 said:
He's gotten more milage out of his "certain set of skills" than any actor in history

This had the potential to be much more than it was. My analogy for Neeson movies is like a shampoo label--Lather, Rinse, Repeat....over and over again.
Click to expand...

You hardly ever see this much disparity between critic and audience scores: 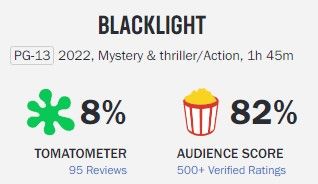 Michael Boeker said:
You hardly ever see this much disparity between critic and audience scores:

Michael Boeker said:
You hardly ever see this much disparity between critic and audience scores:

Wow...that's quite a disparity. I didn't hate the movie, but found it much of the same from Neeson. In all honestly, if the film came out 10+ years ago, I probably would have graded it higher myself.