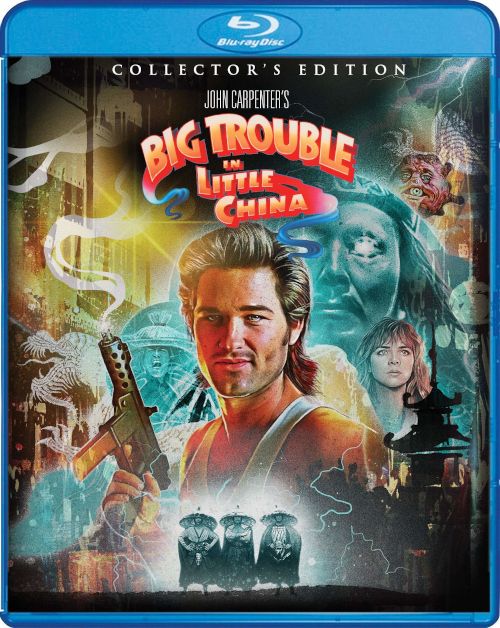 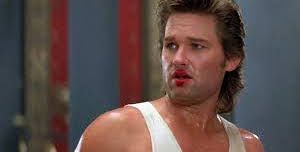 Movie
Ahhh, is their any movie from the 80s more iconic and cult loved than Big Trouble In Little China? Well, there probably are a few I can name, but very few that are just pure action FUN like BTILC. John Carpenter was still on top of his game during the 80s, and was hot off of directing a 1-2-3 punch of The Thing, Christine and Starman, only to change things up from sci-fi and horror to fantasy action with his next out. While Big Trouble in Little China didn’t exactly blow everyone away at the box office, garnered a cult following that has only swollen and increased in size as time has gone by. There’s even sacrilegious talk about remaking the film with The Rock in place of Kurt Russell, and Fox has yo-yo’d back and forth the last 3-4 years as the production is almost underway, then halted, then paused indefinitely, then started again. Who knows if we’ll ever see Dwayne “The Rock” Johnson as Jack Burton, but we all still have the original to be happy with.

Scream Factory has actually come out with a fairly massive set of choices (comparatively speaking) when it comes to this re-release. Usually we see a collector’s edition, or a steelbook collector’s edition, but there are actually THREE full releases here that collector’s can choose from. The first is this edition that I was sent to review. A 2 disc set in an amaray Blu-ray case, with a whole TON of added extras and a nifty slip cover. Simple, concise, and what most would expect from a collector’s edition. The 2nd is a steelbook edition that has both the discs that is in this release, but with different artwork and the obvious packaging difference of a steelbook case (steelbook collectors are some of the more rabid film collector’s out there). The last is a gonzo “website order only” set, with both discs found in the previous two editions, an 18x24 inch rolled poster of the new artwork by Laz Marquez and a 7” vinyl record (in pure green) featuring music from the film. Out of the three choices it’s all up to personal preference. Those who just want to upgrade their 20th Century Fox Blu-ray or DVDs and don’t want frills will be more than happy with this edition. Naturally the steelbook collector’s will want the limited edition packaging, and the real collector nuts will go for the gonzo limited edition set. All depends on how much the varying packaging and add ons to the 2 discs found in each of the three sets means to you. 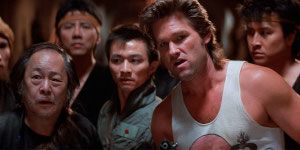 Jack Burton (Kurt Russell) is a loud mouthed gambling trucker who just likes to blow away some time during his layovers in San Francisco by making some money in Chinatown. Even if that means taking said money form his friend Wang Chi (Dennis Dun). However, nothing prepared him for getting involved in the mystical world of Chinatown’s underground, where a mysterious sorcerer named Lo Pan (James Hong) runs the San Francisco ghetto. When Wang Chi’s green eyed girlfriend Miao (Suzee Pai) gets kidnapped by Lo Pan, Jack and his newfound squeeze Gracie (Kim Cattrall) attempt to infiltrate the underworld organization and get Miao back. However, things naturally backfire, and the green eyed Miao is replaced by Gracie (Lo Pan needs a green eyed girl to sacrifice in order to become fully human again), and now Jack Burton has to kick some serious mystical butt in order to get his girl back, get some revenge on Lo Pan and his men for roughing him up, and generally save the day.

Big Trouble in Little China is a fairly “paint by the numbers” story, and doesn’t stray too far from the typical heroes journey. Good guy comes to town, friend is in trouble, big bad guy captures the pretty girl, and it’s up to our heroes to save her. Rinse and repeat. HOWEVER, it’s really the subtext of the film that makes BTILC such a cult classic. John Carpenter plays everything with tongue firmly planted in cheek, and winks quite heavily at the camera, leaving the audience to realize that this meant as pure pulp fiction entertainment in the mode of the early 20th century serials. Kurt Russell hams it up as the smarmy Jack Burton, and only Kurt in his prime COULD have played it this well. The audience is dying of mirth, cheering for the action packed martial arts, and having a blast with the mystical fantasy aspects of the movie. In reality, Big Trouble in Little China has it all. Girls, guns, one liners, magic, and fisticuffs. With Cameron deftly keeping things light and airy while indulging heavily in the fun of it all, Big Trouble in Little China is pure escapist fun that just doesn’t get old, even 33 years later.

From what I can tell and from what I’ve gleaned through sources, this is the exact same master that was used for the 2009 Blu-ray from Fox, just re-encoded by Scream Factory. Comparing the two discs side by side there are subtle differences, but they’re mere nitpicks in my opinion. The new Scream Factory disc is a little lower in the bitrate, but other than a few minor artifacts that show up here and there, looks identical to the Fox release. There’s no major adjustments to the contrast, and it’s basically the half a century old master that we’ve seen for the Blu-ray and DVD special edition release. It’s a good encode, but one that has a few age flaws. Blacks can be a bit crushed, and the dim looking cinematography suffers a bit in the shadow detail department. However, fine details are replicated well, there’s a nice grain structure over the film, and the bright neon colors of Chinatown show up amazingly well.

The film comes with the same remixed 5.1 DTS-HD MA track from the 2009 release, as well as the original 2.0 surround mix in Dolby Digital. I would have loved for Scream to re-encode the 2.0 track as a lossless DTS-HD MA track, but it seems they used what Fox gave them for the audio source. Same as before, we ALSO have the 5.1 DTS-HD MA music only track, which is a nice little gem for us music lovers. The 5.1 mix is nothing special, but it gets the job done quite well. Dialog is well defined and localized up in the center of the room, and the surrounds get kicking once the action heats up in Chinatown. They’re not always present in every scene, but there’s some solid ambient effects and localized sounds that come through in those back channels. Bass is a bit subdued, but there’s still plenty of low end bump once Jack heads into the world of Lo Pan, and the martial arts action sequences get the most work in that department.

Big Trouble in Little China is just big, goofy, fun. John Carpenter is firing on all cylinders, as is Kurt Russell. The movie has long since been a staple of action and classic fantasy fans alike, and is actually MORE highly thought of today than it was 30+ years ago. Scream Factory’s new collector’s edition is all about choice. We can get the regular collector’s edition, the steelbook, or the web only version with extra swag. All three carry the same transfer and audio mixes as the 20th Century Fox release (well, the main audio versions) but the amount of on disc extras has been VASTLY improved, with the steelbook and “extra swag” edition adding a bunch of physical extras as well. For those who have the 20th Century Fox Blu-ray release from almost a decade ago, upgrading will depend on how much you want those copious extras, otherwise for the un initiated, this is probably the most feature packed release to date.

Thanks for the review. I actually never saw this movie so will have to check it out.

Thanks for the review. Nostalgic, will have to revisit one of these days.

This is going to sound crazy... not ashamed to admit it... but I've never seen this flick from start to finish. Having lived through the 80s in my teenage years, you'd think that couldn't be possible, but it is!