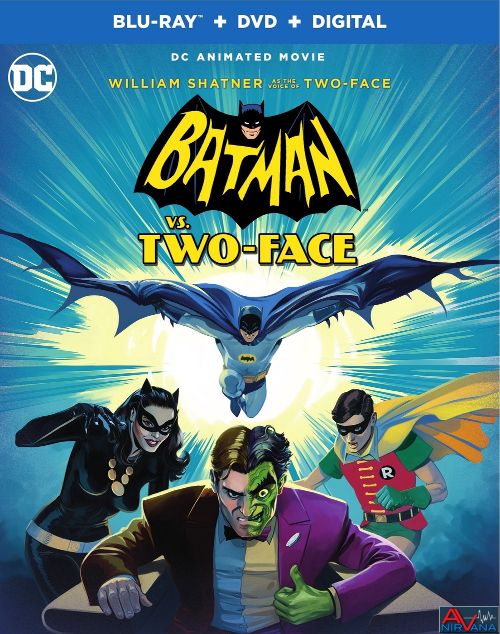 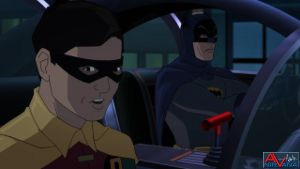 Movie
Last year Warner and DC animated decided to shift away from the New 52 serialized films just a bit and create a few side projects. The most notable (and entertaining in my opinion) was the return to the good old 1960s Batman with Return of the Caped Crusaders. It had all the of the gleeful boyish charm of the 1960s TV series, as well as including a return to the cowl for Adam West himself, along with Julie Newmar and Burt Ward reprising their roles as Catwoman and the boy wonder himself. The film was cute, charming, right in the PG rated world, and utilized all of the classic villains and set pieces to recreate that old fashioned feeling. I was a bit hesitant on the recreation of that era, but Return of the Caped Crusaders was one of the more entertaining Batman diversions I had seen in quite some time, and the sales of the DTV discs proved that I wasn’t the only one. Thus prompting a sequel in the form of Batman vs. Two-Face. Burt, Adam and Julie all reprise their roles again, (with this being Adam West’s final role before passing away a few months back) to give us another adventure with the classic caped crusaders.

Harvey Dent has long been gone in Gotham City, and in his place reigns the criminal mind Two-Face (both played by William Shatner) after a science experiment gone wrong at the hands of Hugo Strange (Jim Ward). However, after much time and effort, Batman has rehabilitated the criminal and returned the scarred man’s face to its former human glory. Now, with Two-Face off the streets, Bruce Wayne can have his old friend back, and Harvey can get back to working in the criminal justice system once again. The only thing is, crime hasn’t slowed down much. King Tut is back on the scene again, soon followed up by an escape by Catwoman and an attack by the famed Bookworm. Each of these criminal enterprises seem to have ONE connecting theme running through them. A link of duality that can only mean one thing. Two-Face’s dirty little paws seem to be written all over it.

Bruce is reticent to believe that Harvey Dent could have anything to do with this nightmare, especially after Dent seems to be doing so good in his old job again. Combine that with the fact that his face has been healed from the gas that turned him evil, there HAS to be another explanation. Unfortunately, Robin doesn’t have the same sentiments that his mentor does. Suspicious that his old friend is letting emotions get in the way of his logic centers, Robin bitterly refuses to accept the thought that someone might be impersonating Harvey Dent’s alter ego, and soon the boy wonder and the dark knight are at each others throats while all of Gotham is in grave peril. 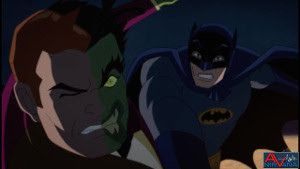 Batman vs. Two-Face is a fun little follow up to Batman: The Caped Crusaders from last year. It’s kind of a bittersweet moment though, as this was not only a blast of a film, but the final exiting performance of Adam West in his most famous role after passing away earlier this year. West gives it his normal cheesy all, and Burt Ward sounds surprisingly spry and nimble despite his age. Julie Newmar has a hard time sounding like her puuuuuuuurrrrfect old self, but age does that to ones voice. The real co-star of the show happens to be Shatner as Two-Face/Harvey Dent. The man pulls out a 1960s cheesefest performance and just revels in the joy and sloppy hammy nature of the character. Shatner has always been the master of cheese, but he just has FUN here and the character benefits greatly from it.

As I said, I will be sad to see this little sub series go, but the powers that be have said that they want to continue on with this serialized storyline. Unfortunately I don’t think that they will go on as West was the heart and soul of these two films, and the big draw for many of the viewers. Without him I fear that we have seen the last of the 1960s *Biff *Pow! films without good old Adam West at the helm. While that’s a sad thought, it’s also probably a wise decision, as stretching things out past their lifespan is one of the worst faults of many a series.

Rated PG for action, some mild language and suggestive content 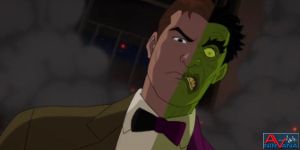 In typical WB/DC fashion, Batman vs. Two-Face comes to Blu-ray with a very nice looking Blu-ray encode. The 1.78:1 framed film shows off some fantastic colors, with the bright blues, deep blacks, and reds of the costumed crusaders popping off the screen with fantastic results. Depth is well done, with solid layering effects and some great fine details for the simplistically animated film. No jaggies or soft spots to my eyes, although there is one problem that seems to be problematic for most of these animated films from WB/DC. Yes, I’m sure you’ve guessed it at this point, holy banding Batman! The banding is actually present in just about EVERY scene of the film, and while it’s not HUGELY distracting, it is prevalent enough to have me drop a full half star off of the rating as a result.

The 5.1 DTS-HD MA track is just as pleasant as the video, and showcases some nice action sequences. Vocals are crisp and well defined, with an even balance applied to the heavier action portions of the movie. LFE is deep and guttural, adding some nice weight to the batmobile and other weigh important objects, but the biggest and most powerful waves seem to originate with the “Biff” and “Pow” moments strewn throughout the film. Surrounds are decently appropriate, with the roar of the batmobile coming from the back to the front of the room, as well as the tinks and explosions during the final fight with Two-Face in the exploding warehouse. It’s a very nice track, and while it’s not AS dynamic as some of the New 52 films, it is more than capable of providing a very nice listening experience.

• "The Wonderful World of Burt Ward" (featurette) - Spotlighting Burt Ward's life away from acting, particularly his many benevolent activities, and his lifelong devotion to the health and welfare of dogs.
• Adam West Tribute Panel/2017 Comic-Con International 2017 - At the 2017 Comic-Con International in San Diego, a panel celebrated the life and times of the late Adam West, the legendary "Bright Knight." Fans laughed, cried and cheered as actress Lee Meriwether (Catwoman from the 1966 Batman movie), director/writer/actor Kevin Smith, actor/radio personality Ralph Garman, producer James Tucker and moderator Gary Miereanu captivated the audience with anecdotes and tales about Adam West.
• Actors Burt Ward and Julie Newmar discussing various aspects of their lives, ambitions and inspirations.

Batman vs. Two-Face is a fun little jaunt back down memory lane, and one that has the perfect balance between light n fluffy, and fun action. Adam, Burt, Julie and Shatner all lend their iconic voices to the presentation, and the presentation truly benefits from their decades of talent. The movie itself is actually a slight upgrade over The Caped Crusaders, in my opinion, and is a well done Blu-ray to boot. Audio and video are solid WB/DC fare, and the extras while small in quantity, make up for that by being rather in depth and full of more goodies than I expected. Definitely worth a fun watch.