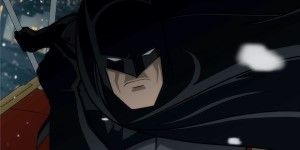 Movie
Batman origins stories (or at least early years stories) are a dime a dozen in the world of comics, and we’ve seen him rebooted a million times. However, outside of Year One, there is only one other graphic novel run that is iconic as The Long Halloween. Originally created by Jeph Loeb and Tim Sale, Batman: The Long Halloween is a slow burn mystery thriller story spread out over 13 issues. In many ways it is a spinoff of the IDEA of Batman: Year One, but takes a more methodical and slow burn approach to the story. It showcases Batman during his very early years, back before Harvey Dent became Two Face, and Joker was just a thorn in his side.

Split into two parts originally The Long Halloween tells the story of Batman (Jensen Ackles), Harvey Dent (Josh Duhammel) and Commissioner Gordon (Billy Burke) tracking down a mysterious killer who is knocking off crime bosses during the holidays. Nicknamed “Holiday”, this killer has been eluding the crime fighters and it’s up to Batman, Dent and Gordon to play fast and loose with the rules (bending them, but never breaking them as Gordon says) in order to find out who the killer is before it’s too late. At first it seems like a case of Occam’s razor. The obvious suspect. However, that suspect soon turns up dead and every stone that Batman unearths leaves him more and more puzzled until even he begins doubting his abilities.

I hesitate to describe much more, or who shows up in the movie as it’s getting heavily into spoiler territory at that point. In many movies it’s not a big deal (really, we all know in John Wick that the puppy dies and John is out for revenge. Not a big plot spoiler), but here the mystery requires us to keep mum about a few things and just let it unfold. Needless to say this is a well crafted mystery, hearkening back to when Batman/Bruce was more of a detective than a brutal heavy hitter in later, more jaded years. It’s well paced, and everything runs so smoothly that I really was surprised that the 86 minutes were up when the credits rolled.

As with all mysteries, the characters are the heart and soul of the enjoyment. Jensen Ackles does a solid job as Bats, but there was this weird thing where you could tell he was trying TOO hard to imitate the gravely Batman voice. Billy Burke and Josh Duhammel really shine though as the other two crime fighters. The two just work smoothly on screen and you can tell the two just fall into character with buttery smooth ease. One thing of note that saddens me about this production (and makes me wonder if she’s voicing Catwoman in the second film) is Naya Rivera, who turned up dead last year in a boating accident. She was great as Catwoman, and while I don’t mean to make light of her death, I really do hope her voice work for the 2nd movie is completed, as she was perfect in the role. A good movie, it does have a few pacing issues where I felt the movie could have done better, most importantly with The Joker. Troy Baker reprises his roll as the 2nd best Joker voice actor ever and while he’s PERFECT as the clown prince of crime, Joker himself feels a bit shoehorned into the picture. 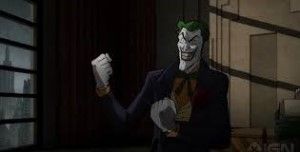 Spoilers ahead. If you haven’t read many Batman comics, or if you don’t know the story of the original graphic novel you can skip ahead, but most anyone who’s seen Batman over the years KNOWS where this is going.

Well, The second half picks up after nearly a year of holiday killings, and the mysterious murderer strikes again. This time taking out Carmine Falcone’s rival, Marone, starting what seems to be a chain of events that will unravel the Falcone legacy. Falcone’s son in law (who happens to be Marone’s son) agrees to turn state’s evidence with Harvey Dent (Josh Duhamel), but poor Harvey is in for a rude shock when he finds out that it’s all a ruse for Falcone to try and kill the district attorney.

However, things take an odd turn (or a very obvious turn) when Harvey starts hearing voices in his head. Voices that we all know is the precurser for him turning into one of the biggest villains in Batman’s gallery or rogues. Simultaneously Bats is still trying to figure out if the Holiday killer really is Harvey/Two Face, and every question leads him down a road that may not lead where he expects it to (or the audience).

The story itself is much more tightly focused in the second half (which was just "Part One" originally), mostly because part one was simply setting everything up. This is the big finale where we find out what happened to all of the clues that were left behind. Part of the movie tries a VERY obvious ploy to get us to look one way (it’s pretty obvious from the beginning that Harvey was the red herring), only to pull the rug out from under us at the very end.

The movie takes a lot of elements from Batman lore, including the combination agreement between Harvey Dent, Gordon and Batman that we all got to see in The Dark Knight, then crafts it into a murder mystery that sets up Dent to become his infamous self, all the while intertwining another subtle mystery that is hidden in the main one. A good story that plays out well, even if it’s never “perfect”.

Rated R for some violence and bloody images

One of the biggest drawbacks for the individual releases of the The Long Halloween was the fact that the animation really REALLY stretched the 1080p format’s capabilities, and the color grading is very grim and gritty. As such, it was rather bleak, desaturated and generally filled with banding and crush out the wazoo. I’m not sure if the Blu-ray is remastered for putting both films on one BD-50 vs. 2 BD-25s, but it does look distinctly better. The 4K UHD on the other hand is a BIG jump over the 1080p encode. Sure, it has that same bleak and grim look to it that the animation style dictates, but the 4K UHD format allows for much better handling of the black levels and color saturation. The HDR application is really phenomenal here, adding in deep and inky blacks that still show every bit of shadow detail, and round out the blues and greens and blacks of the grim color palette. All in all, it’s not a PERFECT transfer, but by golly is it a huge amount better than the Blu-rays were. Especially with how it nearly completely eradicates the banding found on the 1080p discs.

The 5.1 DTS-HD MA track is the exact same track as the one on the individual Blu-ray's, so this will just be a re copy of that description..... Said track ss brash, loud, and well detailed throughout the 85 minute film, much like previous DCAU films. The film tends to be more low key than others though, acting as a mystery and not as a non stop action film. However, when Batman starts hunting down criminals one by one things cook off quite nicely. Bass is powerful and punchy, with solid impacts for fisticuffs and batmobile chases alike. Dialog is always crisp and cleanly located in the center of the room and surrounds filled with lots of chaos. Like many of the DCAU films it’s not STUNNING, but it is quite an impressive track that should please just about everyone. 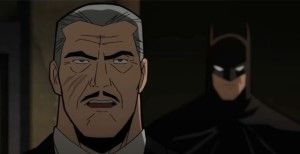 I really enjoyed Batman: The Long Halloween. It’s a different take on Batman, focusing more on being a slow burn detective story rather than a high paced action movie. It’s not perfect, especially with some of the junctions between the first and 2nd move (watching that after credits scene is integral to understanding the first few minutes of the second half on the Blu-ray, but is seamlessly integrated into this deluxe edition). It’s long, tightly wound, and ends up with a rather satisfying payoff. The upgrade from the mediocre Blu-ray to the healthier size of a 4K UHD disc makes all the difference in the world for the video, and is definitely the version you want to see. Still the same recommendation of a fun watch, just with better video, but annoyingly missing many of the extras from the individual releases.