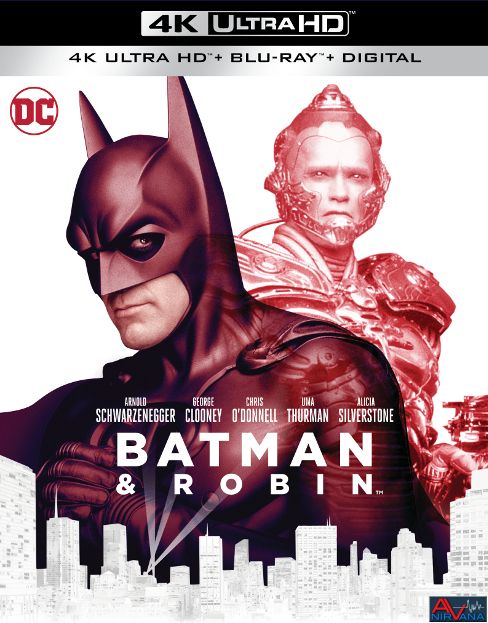 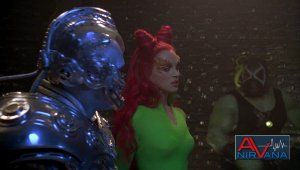 Movie
Yup, we all knew how this wild ride through Batman history would end. A surging rush that would get us all excited, only to run into the train wreck that is the Joel Schumacher films, culminating in the single movie that killed Warner Brothers from releasing another Batman movie until Christopher Nolan’s newer take on an old subject. Batman & Robin is widely considered to be one of the worst blockbuster films of all time, and the single movie that nearly killed Batman films for a good decade. While it may not be the crown jewel of Warner’s Batman archives, they have gone back and giving it a loving restoration on the video front, a great Atmos track, and ported over all of the extras from the great Anthology box set for this individual release (which is soon to be a box set in September, but by all accounts appears to just be this release packaged in with the others in a box. There is no new additional material or features in the set)

Batman (George Clooney) is besieged by yet ANOTHER duo of enemies teaming up to take him down. This time it’s a pair of embittered villains who want Gotham to pay for what it has done to them. Victor Freeze (Arnold Schwarzenegger) is searching for a set of gems that will help power a freeze ray to turn all of Gotham into an ice world where the rest of the populace can live like he does, and the other is Poison Ivy (Uma Thurman), a ticked off biologist who loves nature just a LITTLE bit too much. She and Freeze hook up to take down Gotham and turn it into a cold natural paradise without the disease of humans, and only Batman and Robin (Chis O’Donnell) stand in their way. Well, with the addition of a shoehorned Batgirl (Alicia Silverstone).

Batman & Robin suffers from much of the same problems that Spiderman 3 did from the Sam Raimi franchise. It stuffs way too many characters into the film and it turns into a bloated mess. Having two villains worked in Batman Returns and Batman Forever, but not only do we get Freeze and Poison Ivy, but the powers that be decided to cram Bane into film as a mindless drone (with a horrible body suit and a complete butchery of his comic book character). Then on the hero side we get Chris O’Donnell’s whiny Robin, and someone got the bright idea to cram Batgirl into the film, and having Alicia Silverstone play her off as a 90s bad girl. The end result is a hilarious mess of a film that just exudes all of the problems of mid 90s pop culture. 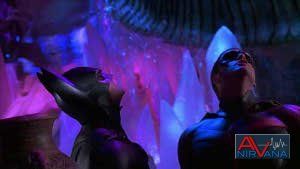 One of the biggest problems with the film is that it was rushed to market. After Batman Forever did well enough at the box office, Warner Brothers rushed out a script for a sequel, and even though they couldn’t get Val Kilmer to come back, they got the ever popular George Clooney. Only thing is, Schumacher bungled the direction of the film and Akiva Goldsman’s script was just as bad as Forever’s was. Clooney just acts like George Clooney 100% of the time (it was almost laughable to watch him not even TRY to be Bruce or Batman) and the mid 90s biker culture and leather is enough to give most people a chuckle.

Now while I bash the film for it’s painful script, horrible direction, miscasting and too many characters (not to mention the hilarious abuse of Dutch Angles) the movie DOES do a few things right. I originally thought that Forever was the superior film of the Schumacher debacles, but I really like Freeze’s character arc, and some of the darker aspects of the movie are handled with less goofiness. The film is still a wretch of a movie by all accounts, but Goldsman really tried to give his villains more depth in this one.

Rated PG-13 for strong stylized action and some innuendos 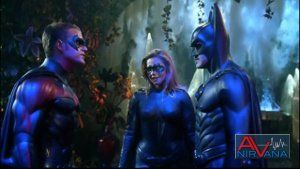 Wowza. 4 for 4 right here Warner Brothers! All I can say is that Warner has meticulously redone all four of these 4K movies with amazing results, and comparing the older VC-1 encoded Blu-ray vs. the new remaster is something that makes the video nerd in me completely giddy. The difference between the two discs (and even the newly remastered Blu-ray included) is staggering. The clarity is so much more crisp and clean, with the outfits and neon lit backdrops of Gotham City looking amazing to the eye. This and Batman Forever moved away from a lot of practical effects and into the world of CGI, and while some of the 90s CGI looks a little bit cheesy and hokey, the clarity and sharpness surrounding it certainly does not. Watch as the hockey team of doom and Freeze’s attack ship break into the museum during the opening scenes, you can see the little jewels reflecting in the background from chandeliers, and the pores and icy spots on Freeze’s face are so much more vivid and noticeable. Colors are kind of like Batman Forever’s in that Joel Schumacher moved away from the gothic neo noir of Batman and Batman Returns and infused it with a 90s neon glow. This time instead of heavy HEAVY green like in Forever, it’s infused with shades of pink, purple, blue and green depending on which villain is present. It’s unique, gaudy and garish, but wonderfully saturated and deeply vibrant thanks to the HDR. Black levels are seamless and while some scenes seem to have been retimed with more brightness to them, I noticed the blacks seem darker and even showed a HINT of crush surrounding the black “Bat” costumes at times. Nothing wild, or even enough to knock it down a half star, but there if you compare directly against the Blu-ray. 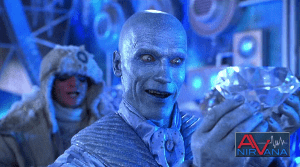 The 5.1 Dolby Atmos track is an in your face, rough and tumble, typical action 90s track with a new Atmos twist. Again, I’m going to compare against Batman Forever as they shared the same time period and director, and the results are generally the same. The LFE is hot and heavy (sometimes cooked REALLY hot), and the action sequences drive the Atmos capabilities to their max. The surrounds and overheads are chock full of discrete and ambient sounds (such as the batcopter and batplane overhead), and the dynamic range is MASSIVE. Quite moments with Poison Ivy are punctuated with walls of bass and explosive action, and the track’s score allows for a fluid and a very vibrant musical variation to bleed through as well. It’s a great track and like the rest of the Batman films on 4K, is a crowd pleaser on every level.

• Audio Commentary: Director Joel Schumacher.
• Shadows of the Bat: The Cinematic Saga of the Dark Knight pt. 6 - Batman Unbound
• Batman & Robin: The Heroes
• Batman & Robin: The Villains
• Beyond Batman
• Deleted Scene: Alfred's Lost Love
• Music Videos: "The End is the Beginning is the End" by The Smashing Pumpkins, "Look Into My Eyes" by Bone Thugs-N-Harmony, and "Foolish Games" by Jewel.
• Theatrical Trailer

Batman & Robin is generally considered one of the worst big budget movies of all time, but I think that it actually outclasses Batman Forever just a liiiiiitle bit. Sure, the movie is so bad that it’s legendary, and Clooney is widely considered the worst Batman of all time, but there are some seriously fun parts that have me rooting for it. Good old Arnie as Freeze is a highlight, and Uma Thurman just hams up Poison Ivy to epic proportions. The darker aspects of Freeze’s life are handled better than they were in Forever, and the crazy end battle is so ludicrious that it’s almost fun. Yeah, This is NOT a good movie, and most fans of Batman only watch it for the comedy, but as a completionist I’m still forced to get it. The audio and video remasters are just about perfection and HUGE upgrades over the old Anthology set singles from 10 years ago (and I mean HUGE upgrades). While the movie can’t be recommended at all on a serious note, Batman & Robin is watchable as an MST3K type of scenario or as a “so bad it’s almost good” type of watch.