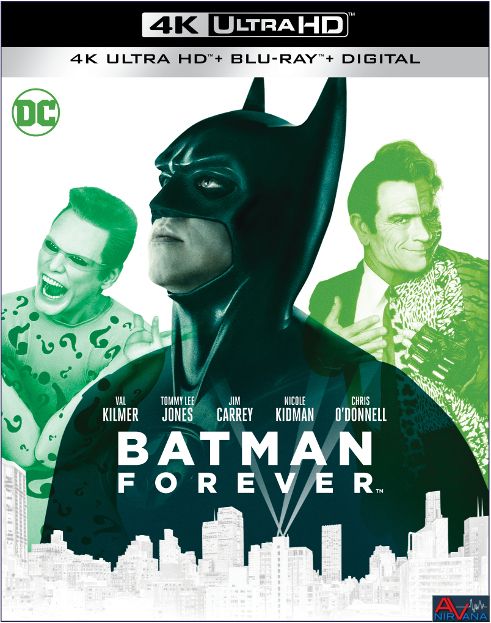 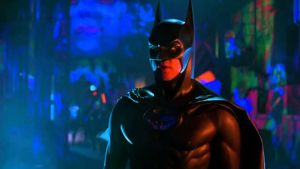 Movie
I’ve always been amazed how far the opposite direction Joel Schumacher took the Batman franchise. Hot off the press from doing gritty and grungy stuff like Falling Down (great movie by the way), Schumacher decided to literally flip a 180 with the Batman’s and turn it into a goofy spectacle. I personally would have LOVED to see him do a really dark and harsh take on the caped crusader, but instead he delivered the goofiness of the 90s in one big cheesy bite. Casting Val Kilmer may also have been a bit of a mistake, because he plays a good Bruce Wayne, but one of the worst Batman’s I’ve ever seen. The movie isn’t a train wreck by any stretch of the imagination, but it’s pure 90s cheese and was the first step to almost killing the Batman world on film for good, only to be revitalized by Christopher Nolan in the 2000s.


Batman (Val Kilmer) now has to deal with two new deadly foes. This time it’s the crazed Two -Face (Tommy Lee Jones) and his maniacal goons, as well as a disgruntled ex Wayne Enterprises inventor named Edward Nigma (Jim Carrey) who has taken his brain sucking device public and is using it to siphon off the brain power of Gotham City. Not to mention Bruce Wayne actually has to act as a sort of father figure when he takes in Dick Grayson (Chris O’Donnell) who has been orphaned by Two-Face. Dick figures out Bruce’s dirty secret (of being the Batman) and begs the master to teach him how to be a super hero too so that he can avenge his family. After Bruce pulls his typical moody teacher routine, Dick uses Alfred to help him suit up and fight crime with a rubber suit as well, forcing Batman to utter cheesy lines like “Who’s your tailor?” before heading off to beat up Two-Face and Riddler (Edward Nigma’s chosen nomenclature). 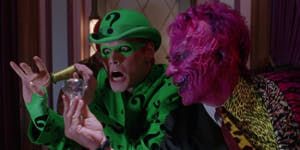 Ugggg, where can I begin? Batman Forever used to be a guilty pleasure of mine, but over the years I’ve come to view it as the worst of the original Batman films. Kilmer is fun enough as Bruce Wayne, but he’s more wooden under the mask than even Clooney (who’s pretty awful I might add) and Nicole Kidman is PAINFUL as Dr. Meridian of Arkham. Chris O’Donnell isn’t horrible as Robin, but he’s betrayed by the awful script which paints him as a whiny douchebag who is more like Hayden Christenson’s Anakin Skywalker more than anything. The only real shining moment in the film is watching Jim Carrey ham it up as The Riddler. His zany antics are just what the doctor ordered , and while he’s not as typically brilliant as the comics make him (his brain power is from his device, not from just being naturally crafty) , it’s a generally fun performance that elevates the film more than it really should.

Batman Forever is loud, brash, completely 90s stupid, and honestly worse than Batman & Robin. I know, I know, how can that be? Batman & Robin is the worst movie of all times? Well, I’d say they’re both equally poorly written and acted, but It’s due to the fact that Batman & Robin handles the darker elements of the story better, and has more cheesy fun with its villains. Two-Face is trying to be a poor man’s joker and really can’t sell the darkness of Harvey Dent’s soul, and while Jim Carrey is fantastic, it’s not enough to really sell the grimness of the tale. At least with Batman & Robin we get Arnold as Mr. Freeze. 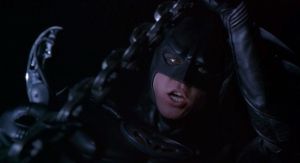 Just like the movie’s style, the visual style for the film is changed up quite a bit too. Instead of the deep and brooding Gothic overtones of Burton’s films, Schumacher’s attempt at a Batman movie is like a neon technicolor circus. Neon shades are EVERYWHERE, with the grungy look replaced with the black shiny leather of a gay nightclub. The outfits are outlandish with a gleaming rubber look (complete with Bat butts and bat nipples included), and the colors are garrish and in your face. Now, this is ALSO a massive upgrade over the old Blu-ray (as is the included remastered Blu-ray), as the detail levels are dramatically improved. Look at where Batman is looking up at the camera in Riddler’s lair. The difference in visual detail level is simply stunning. The image is a hair darker, but it is more revealing as the HDR allows more shadow detail to show, which in turn gives the entire image a more clean look. I will admit that there is some blue tinting to the image, with the original Blu-ray’s overly green look being tamed down just a tad. Black levels are incredible though, and the use of HDR applies evenly to the garish greens, neon purples and various other shades as well as the inky blacks. It’s a great looking encode as are the rest in the series, and well worth upgrading for if you’re a fan.

As with the others, the remastered Blu-ray is a big improvement over the old Anthology set Blu-ray as well. Colors are brighter, more intense, and the detail of the new AVC encoding is light years ahead of the beaten up and older VC-1 encode that we’ve had to deal with over a decade. If you don’t have 4K at the moment, the Blu-rays will more than tide you over until upgraditis sets in. 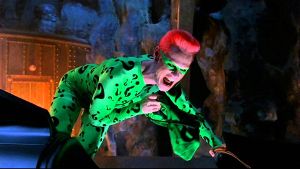 Back in the day of Laserdisc Batman Forever used to be a demo disc for multichannel surround sound with it’s aggressive surround stage, and in your face acoustics. Just like the video track, the audio is a change up from the Burton way of doing things, and is right in track with the 90s way of being super aggressive, super loud and in your face like grunge rock concert. The opening moments of the film with the theme song blasts the listener back into their seats, and doesn’t really let go till the credits stop. The film is chock full of sonic joy with the swooping sounds of the Batplane, or the crashing of glass in the Riddler’s lair. The bass is POWERFUL and cooked nice and hot, adding some serious whomp to the battle scenes and cackling of Jim Carrey. The Atmos overheads are used with great aplomb, utilizing themselves all throughout the film, with batplanes zipping overhead, or Batman (once again) leaping from overhead. Dialog is always crisp and clean, while the action is cooked hot and heavy, is never overbalanced or obtrusive into the quieter moments. 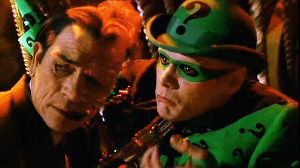 Remembering back to when I was a kid I used to really enjoy Batman Forever and actually thought it was superior to Batman & Robin. However, as time goes by the film hasn’t aged very gracefully at all, and I actually think Batman & Robin handles the darker elements of the story better than Forever does. The saving grace to the film happens to be Jim Carrey, who is so gloriously over the top and fun with his portrayal of The Riddler. He was king of comedy back then and his zany antics was perfect for a crazy genius. Like always, the extras are a port from the Anthology set, and the new audio and video (for both the Blu-ray AND the 4K UHD disc) are leaps and bounds better than the old Blu-ray by a country mile. I know I can’t recommend the movie as a blind buy as it’s pretty wince worthy, but I’m a glutton for punishment and have to have it to complete my Batman collection, so it’s still recommended for Batman fans as the tech specs are worth it alone.