Batman: Death in the Family 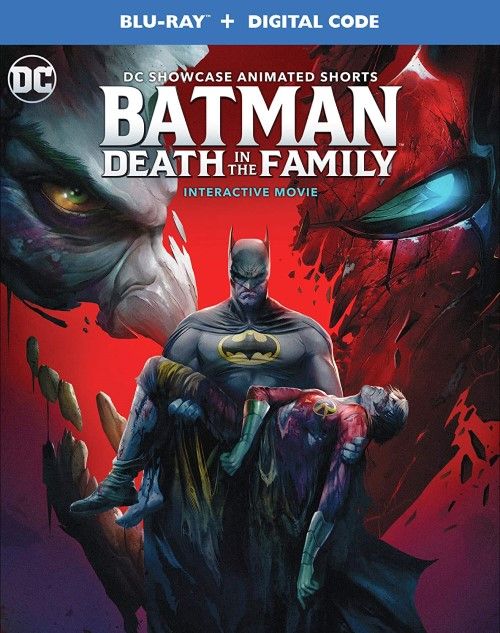 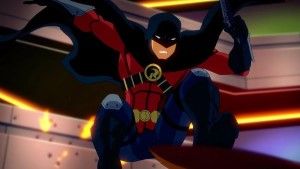 Movie
Batman: Death in the Family is something of an oddity in the DCAU films. It’s based off of the seminal 4 arc issue of the same name in 1988, and a brother film to Batman: Under the Red Hood that was released about 10 years ago. HOWEVER, it’s basically a short film that has been created into a “choose your own adventure” film, where the story will stop at key plot points, and choose what the main character will do, thus changing the direction and ending of the film. The novelty of that is basically left behind in the 90s, but for some reason Warner decided to resurrect the old practice and use one of the best Batman story arcs for their little experiment.

Those of you who know Under the Red Hood will know the basics of the story, and those who have read the comics will know that this is one of the biggest Batman stories of all time, and one of his biggest “failures”. Jason Todd (Vincent Martella) and Bruce Wayne are at each other’s throats, but generally good as the infamous Batman and Robin. But after Jason’s willingness to show brutality and vengeance on his victims, Bruce is forced to let him go. That is until a chance meeting in Bosnia brings them together once more as Robin/Todd is chasing The Joker (John DiMaggio) while Bruce is chasing Ras Al Ghul, only to find out that their two cases are connected. Batman makes a mistake which leaves Jason helpless, where he is assaulted by the Joker and murdered. 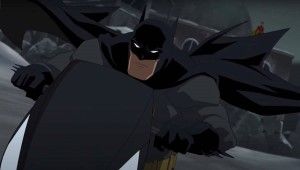 Now. Up until this point the story is pretty straight forward and unaltered. It’s straight out of the comics, and about to lead to one of the biggest Batman deaths of all times. However, this is where the “choose your own adventure” kicks in, allowing the audience to choose what happens to Jason, and subsequently starts a chain of events where they can choose how people react in the rest of the film, and craft subtly different outcomes for both Jason and Bruce Wayne. Naturally the option where Jason dies segues into the typical Red Hood story (which is also the longest), but choosing alternate path ways for Jason bring whole new sub plots into play, some of which are substantially shorter than the “main” story line.

I’m not sure why the powers that be chose the “choose your own story” method for the film, as it sort of detracts from the overall experience in some ways. However, I think it may have been a way to tell the story without being a clone of Under the Red Hood. But overall it’s kind of strange, even though the story told within is fantastic.

One note to the wise. The 86 minute run time listed on the back is ALL of the different paths and endings added up together, the story itself will be about 17-30 minutes depending on which paths you choose to navigate towards the conclusion.

Rated R for strong bloody violence, and some drug material 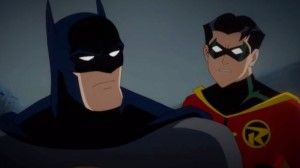 The 1.78:1 framed AVC encode is quite good and despite the lack of 4K (I’ve talked it over with several contacts and they all seemed under the impression that it was due to the authoring limitations of the 4K UHD specs and that with Blu-ray it was much easier) is a crowd pleaser. The animation is well done, and the lack of major banding is a big thing for a DCAU Warner film (there is SOME banding, but it’s brief and never that obtrusive. However, the other 4 shorts in the extras list are much more prone to it, and I would assume that was due to the lower bitrate needed to cram them on the disc). Delineation is excellent, line detail is exemplary, and the colors have the needed pop. The flick is a very dark affair overall, but the encoding handles it rather easily and without major problems. 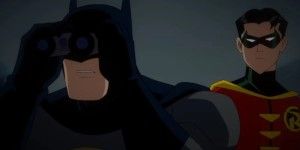 The 5.1 DTS-HD MA track is right in line with previous DCAU films, giving us a powerful action track that really rumbles with low end. The bass is simply crushing, adding weight to explosions and fisticuffs alike, and the powerful score by Christopher Drake (who has done quite a few of the DC films) is really rousing. The only thing I noticed was the 4 separate shorts are in 5.1 Dolby Digital, which sound a bit weaker. One little weird thing I noticed was in the Adam Strange short, which sounds as if the short was mixed wrong. It sounds as if it’s all channel stereo, with dialog and replicated effects coming through all channels (including the surrounds).

As an experimental film Death in the Family is kind of “meh”, but as a 30 minute story about one of the best comic book short runs in history? Still kind of “meh”. It’s a great source material, with some great presentations on screen, but it being chopped up with the “choose your own adventure” method of storytelling, it feels like like a movie and more like an experiment. It’s solid, but somehow doesn’t really rise to even the level of Batman: Under the Red Hood (which is rather great) and instead feels like the powers that be didn’t know how to tell the same story twice without using a gimmick. The Blu-ray of course looks and sounds excellent on Blu-ray and the moderate extras (including 4 other shorts including Sgt. Rock, Death, Adam Strange and The Phantom Stranger) are rather substantial. Fun, but definitely flawed, it still is worth checking out if nothing but for the other shorts, as long as the film’s on sale.