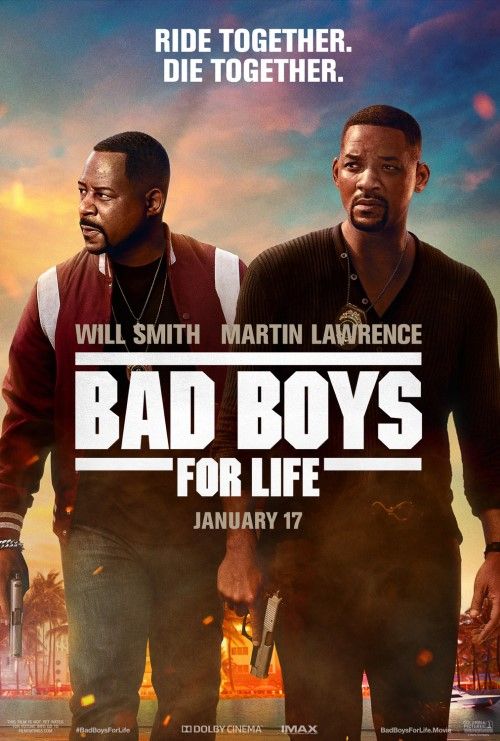 Movie
With Covid-19 messing with supply chains around the world and keeping people at home full time, we’ve had to make some adjustments in a few reviews for the month and take on some digital reviews instead of physical for the time being. Some we’ll be able to supplement with the 4K UHD and/or Blu-ray review in a few weeks, but as some supply houses are shut down due to state lock downs, we’ve made a few deals to bring you the reviews in digital form for the time being, with Bad Boys For Life being the first one.

Ahhhh, Bad Boys. You can’t be a fan of 90s action movies without seeing one of Michael Bay’s biggest action hits of the decade. Bad Boys was tight and streamlined for a Michael Bay movie, adding just enough of his penchant for cheeky dialog and stupidly large explosions, while keeping it much more traditional and straight forward. After that success he and stars Will Smith and Martin Lawrence kicked it up a notch with the RIDICULOUSLY over the top Bad Boys II (which arguably had one of the best freeway chase scenes outside of The Matrix Reloaded). Then….nothing. For years fans have been asking if Will and Martin would ever get together for one last ride together, and for years both stars have said that they were working on it (Mostly Smith from what I could gather). Rumors had it that the movie would “start soon” over the last 5 years or so, but it wasn’t until last year when it was finally confirmed that we would ACTUALLY be getting a 3rd film in the Bad Boys series.

Sadly, we don’t get Michael Bay, as Bay has moved on to other projects. This part actually kind of broke my heart, as Michael Bay’s fingerprints were ALL over the first two films, and was a sort of honorary co-star in the movie if you think about it. His flavor, his style, and his over the top panache kind of set the stage for Will and Martin to showcase the amazing chemistry they displayed in the previous two films. As such, without Bay, it’s almost like we’re missing a major star (although Michael Bay DOES make a physical cameo as the announcer at the wedding part way through the film). Newcomers Adil El Arbi and Bilall Fallah have taken over the directorial reins this time, and they actually do a good job. They’re not Michael Bay and don’t have his innate flair, but they try and keep the feeling of Bad Boys alive and well.

It’s been 17 years since Bad Boys II, and the Bad Boys themselves are still doing what they do best, being Bad Boys. Mike (Will Smith) is still kicking butt and taking names, but Marcus (Martin Lawrence) really DOES want to retire finally. His daughter is getting married to Ricky (the teenager that Mike and Marcus razzed in the second film ironically enough) and the stress of being a police officer for as many decades as he has been has finally worn him down. The last straw is when Mike is shot through the chest by a mysterious gunman and legally declared dead for a short period of time. Enough is enough, and the indecisive Marcus finally decides that he’s done being a bad boy.

Mike is naturally not exactly ready to retire, even though he’s just been shot through the chest, and the new tech world of policing is outstripping his natural bent to just kick teeth in and blow things up in his pursuit of justice. However, getting shot in the chest has put a fire under the bad boy and he wants to get back in the saddle and find out WHO shot him. With Marcus out of the picture Mike is forced to team up with former lover (and officer) Rita (Paulo Nunez) and her team of highly specialized and technical officers to try and find out who the shooter is. When it’s revealed that the killer is part of a bigger plan, and connected to his past, Mike and Marcus team up one last time to do what they do best. Blow things up, say smart alec one liners, and be the baddest mothers in the entire room.

Bad Boys For Life was a movie that I went into with some trepidation. I mean, I love LOOVE the first two films, and without Michael Bay I was worried that the 3rd film would be a flop. Especially coming 17 years after the last film, and a full 25 years after the first one. Well, I was actually pleasantly surprise. Bad Boys For Life isn’t the first two films, and it actually works that way. Adil and Billal play the two characters off as being middle aged men now, and just working with that. Instead of being Bad Boys all the time as one character says, they’re trying to be good…….men. Mike and Marcus are no longer the carefree bad boys they once were (even though they still give Captain Howard need to suck down heartburn medication), and they’re winding down in their life. Marcus is ready for ACTUAL retirement, and their bones and joints can’t handle the wear and tear of constantly kicking doors in and jumping off of buildings. Even a fight early on in the movie has Mike getting his tail handed to him by the shooter, and taking his licks. Still, the heard and soul of the characters are still there, and the maturity they gain from years and years of experience isn’t keeping them down. Guns blaze, Mike is still trying to be a pimp, and Marcus is praying to God to get him through the day

The tone and feel of the movie IS different, and I can’t honestly say that I don’t miss Michael Bay. The man may have given us some horribly cheesy films over the years, but he knows fun and mayhem like no other. Even though Billal and Edil do their best, they can’t mimic the tone and hilarious insanity that Bay infused into Bad Boys and Bad Boys II. Bad Boys For Life is fun, action filled, and well crafted, but as a life long fan of the first two movies, the difference in directors can be startling at times. HOWEVER, that part is mitigated due to the fact that Will Smith and Martin Lawrence’s chemistry makes it so that it’s almost like the two did the second film last year instead of nearly 2 decades ago. Lawrence has pretty much retired from acting, but came back to do this last ride with Smith, and I was shocked at how natural the two still were together. Mike and Marcus are the same men we’ve known for the last 25 years, and while they’ve matured and grown up, the same snappy and comedic energy that they’ve always had is still there front and center. The two men give the movie it’s heart and soul, and while we may have a different director behind the scenes, these men are bad to the bone.

Being that this was viewed through an HDX digital stream and taking into account the fluctuating bitrates and speeds of different people’s internet sources, I’ll refrain from giving a numbered rating to the image. However, the 1080p stream that I viewed this one through (we didn’t get the 4K UHD digital variant that comes with HDR) looked great. The image has shifted a bit from the Michael Bay brightness to a more sandy and yellowed look, with neon highlights. It’s darker, dimmer, and grungier, but still well detailed with great blacks and exceptional detail. You can see the creases and lines of Mike’s aging face, as well as the copious amounts of dirt and debris that get kicked up in the explosions and gun fights. The 2.39:1 image really shines in VUDU (my method for streaming it), and should look great on physical media if this stream is anything to go by.

The same reticence on giving a numbered score goes here as well, but for all you digital people, the HDX comes with a 5.1 Dolby Digital plus track, while the 4K UHD stream will come with Atmos. The 5.1 DD+ track that I got to enjoy was quite nice though, and it really shrieks and roars with the action. Dialog is crisp and cleanly heard in the center channel, while the surrounds and bass track is kicked into full gear with the roaring of Mike’s Porsche, or the thunderous smashing of bullets into things. The end battle between Isabel and our heroes is absolutely jaw dropping, with amazing bass and a sense of immersion that gave me chills.

Bad Boys For Life is a fun action movie that really did surprise me. With a dearth of good action movies the last year or so, it’s nice to see an old school action duo come back to the screen. We don’t have Michael Bay to fuel the insanity, but Will Smith and Martin Lawrence bring the heat….one last time… as the infamous Mike and Marcus. Big booms, big surprises, and a lot of the old samey comfort food that made the first two films hits leaves me giving this one a thumbs up.

Big fan of the original Bad Boys... even though it feels a little dated these days. I'm going to put this on my watch list!

Todd Anderson said:
Big fan of the original Bad Boys... even though it feels a little dated these days. I'm going to put this on my watch list!
Click to expand...

there's nothing dated about my teenage years!!!! I mean, ummmmmmmmmmm, I'm dating MYSELF a bit there