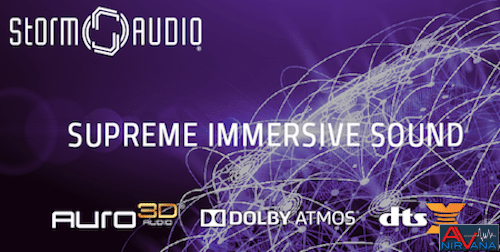 Trélohan has assumed the role of Managing Director.

“I’m excited about this acquisition for many reasons,” says Trélohan. “The response from the channel is that we’ve demonstrated technological superiority with the Storm Audio product line. This has required both continuous hard work and expenditures on the product development side. The strong financial support provided by Saffelberg Investments will hugely benefit our StormAudio brand expansion as we set our sights on taking the brand to the ‘number one’ position in the luxury immersive audio hardware category.”

Storm Audio’s current model offerings support all three of the industry’s immersive sound formats, including Auro-3D, Dolby Atmos, and DTS:X, while carrying features such as DiracLive room calibration and StromMonitoring (a remote web-based monitoring tool). Those offerings include five different preamp processors (ranging from 16- to 32-channels), three power amps (8- to 16-channels) and an impressive 16-channel AVR, all of which are marketed toward the custom install market.

The sale of Storm Audio was finalized on December 1st and the company will now be headquartered (along with Immersive Audio Technologies) in Nantes, France, where sales, marketing, R&D, and manufacturing will take place. The company will also maintain offices in Hong Kong and Novato, California.

According to Wilfried Van Baelen (Chairman, Auro Technologies), the sale was needed due to Auro-3D’s growing list of licensing commitments.

“Auro Technologies has made great progress developing new Auro-3D licensing clients,” explained Van Baelen. “During this time the immersive audio hardware category has significantly progressed, and some of our licensees are marketing immersive audio sound processors that could compete with StormAudio, therefore potentially limiting the success of both the Auro and StormAudio brands. Auro Technologies determined the best solution is for the StormAudio HELAP Hardware Division to now stand on its own, granting it the freedom to further capitalize on what it has accomplished,” said Van Baelen.

The move also opens the door for StormAudio to develop better relationships with Auro’s market dominant competition. According to Trélohan: “Whilst we maintain a great relationship with Auro, we are also excited about working more closely on technical and marketing initiatives with Dolby and DTS.”

This is exciting news. They make a great set of products and this should hopefully allow good expansion of that line. I would love to have their processor as the centerpiece of my theater.

This is an interesting move... largely because Storm was only owned by Auro for between 2-3 years.

Great news on the Auro front, as that's a tech I'd like to see gain more traction... and obviously will also help StormAudio to increase its visibility by marketing with the likes of DTS and Dolby.

Well hopefully this can lead to a solid expansion. I would like to see a stripped down version with 16 channels for maybe about $3500 or so. Still needs to have Dirac, but maybe cheaper build and lesser DACs and analogue parts?

If I were a betting man, I’d say there’s little chance of that happening. Could be wrong, but Storm is firmly planted in that custom install niche. I’d imagine we’ll actually see them continue to push the high end.
You must log in or register to reply here.
Share:
Facebook Twitter Reddit Pinterest Tumblr WhatsApp Email Link