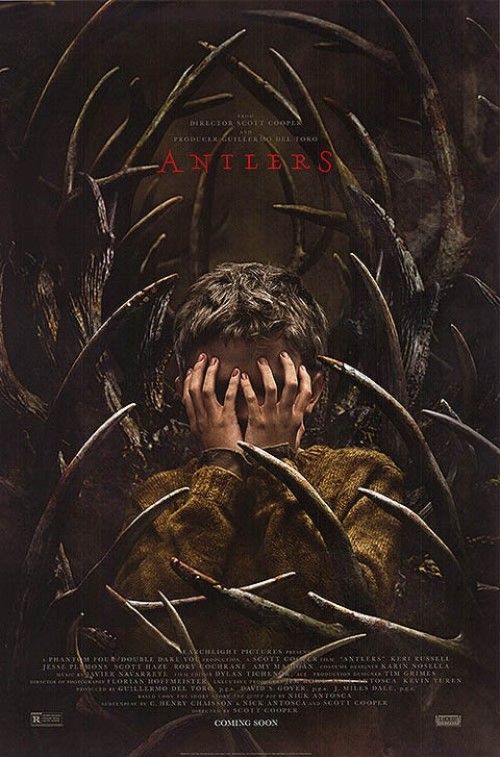 Movie
Scott Cooper’s horror/thriller Antlers wasn’t just side lined by Covid. Originally scheduled to come out almost 2 years ago, it was really put into development hell when Disney bought out 20th Century Fox, forcing the horror title to get pushed back a bit, then lambasted by Covid, and finally dropped in theaters for a short time only to come out on Home video this Christmas/New Years time.

Scott Cooper is a bit a unique director, usually delving into gritty dramas like Hostiles, Out of the Furnace, and Black Mass, but Del Toro actually put his backing behind the man’s efforts to tell a fantasy/horror movie in the form of Antlers. That alone says something, as Del Toro is pretty picky about who he backs for horror movies, but you can be certain that when he does the movie is going to be a creepy and atmospheric affair at the minimum

Set in an isolated small town in rural Oregon, the plot revolves around a young boy named Lucas (Jeremy T. Thomas) whose family undergoes a horrific transformation. The beginning shot shows Lucas’s family seemingly attacked by SOMETHING in a mine while their father is making meth, but soon jumps to the present time (some unknown time later) where Lucas is struggling in school. His teacher, Julia (Keri Russell), notices that he’s showing some signs of psychological abuse (she seems to have suffered at the hands of her own father as a child) and takes an interest in the boy. The only thing is, Lucas is harboring a secret so dark and supernatural that it may swallow the entire town.

I won’t spoil too much of the plot as it’s best to watch the film unfold on it’s own, but at it’s core this is another retelling of the classic Indian Wendigo folk lore. We’ve seen it in films like Pet Sematary before, but this is a strangely hypnotic and slow paced, yet INCREDIBLY atmospheric retelling. The plot doesn’t even try to hide the fact that Lucas is trying to take care of his father who is morphing into the monster, but it’s really the unfolding of the beast’s rise and fall that’s the main focus of the story line. That and Julia Meadows bonding with Lucas or obvious trauma.

The only real downside to the story is that it doesn’t tie of up every loose end, nor is the plot THAT unique. While it’s a slow burn horror movie with an incredible amount of atmospheric immersion, the movie hits all of the typical monster movie beats right on cue. Now, that being said, you can obvious see why Del Toro was so enamored with Scott Cooper’s script, as you can see and FEEL the intense terror and body horror that someone like Del Toro is drawn to. The monster itself is kept out of the lime light most of the movie, but you see it slowly come to fruition over the course of the 93 minute movie, and the reveal is quite a beauty (despite the obvious budget constraints that kept it from getting more screen time).

Rated R for violence including gruesome images and for language

Being that this is an HBO max video stream, I will refrain from doing a technical review on the video until the physical release comes out
Being that this is the first time I’ve really tried to review the video score of a digital film vs. the physical copy, please forgive me if I’m not spot on my scoring. The flick itself is incredibly dim and gray looking, with this sort of gritty and grimy and just plain nasty look to it. The Oregon town is worn down and beaten, with lots of grays and Oregon style earth browns thrown in for the color palette. The Wendigo cave takes on an orange look to it with the dull lighting, but overall this is a very grim and bleak looking film that relies a lot on black levels. The digital copy IS Dolby Vision, and the enhanced color grading makes for some impressive black levels, even despite the obvious compression that a Vudu digital copy is going to have. I did notice some milky look blacks here and there, and the shots could sometimes look a bit soft and out of focus in the backgrounds. Facial details were generally excellent, though the bleakness and desaturated look of the film keeps it from ever being truly stunning. Good film, great look in 4K for the most part, but heavily stylized.

The film came with a 5.1 Dolby Digital Plus track that is a solid performer. Much like the video, this is an incredibly moody and atmospheric track, adding in a really creepy vibe to the movie. Dialog is crisp and cleanly located up front, and the surround usage was impeccable. The shifting and creaking of the monster as it crept about the woods and lived in the attic of the house were amazing. Bass response was great for the most part, but a little softer than expected in some scenes. I also noticed that some of the surround usage was a bit lower volume than I would have liked and sometimes the entire sound track felt a bit confined. Nothing big, but enough for me to notice it. Very solid horror mix though, and a sweet listening experience even in lossy Dolby Digital plus.

The movie is intense, fun, and full of rather strong character moments, but at the end of the day I kind of feel like this is a GOOD one time watch. By that I mean I thoroughly enjoyed watching the film and it has a lot going for it, but the rewatchability is not exactly the highest. It’s a great body horror film with some neat ideas, and some pacing flaws (sometimes the movie is a bit TOO sluggish), making it a good rental or download for horror fans, but not something I personally see myself revisiting anytime soon. Solid Watch

Thanks for the review. I suspect from the name of the film and from what is described as "changing" of the characters, we know to a certain degree what animal it will form. lol.

I will check it out..

Reminds me of that Far side cartoon of the deers hunting the hunters. lol.