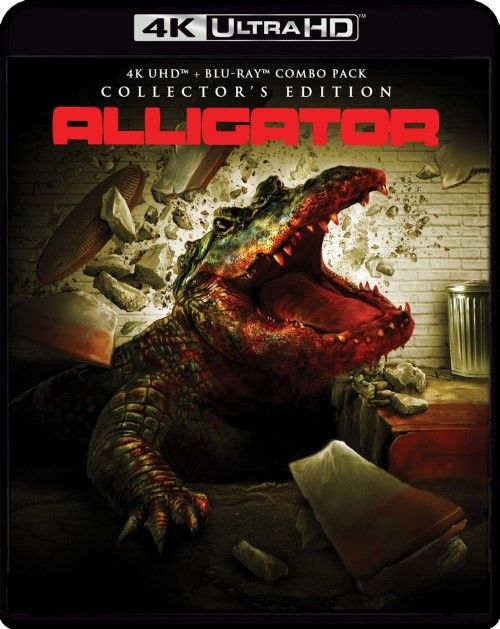 Movie
Not gonna lie, when thinking about “what horror movies are going to get the 4K UHD treatment”? I really didn’t think of 1980’s Alligator. Not to say that the film isn’t deserving. Just that I didn’t’ think that it would be a high enough priority to drag out and give the 4K treatment. But drag it out from the sewers Scream Factory did (and we get the Blu-ray of Alligator II from Scream as well today) with a nice new master and tons of features.

Coming right after the success of Jaws and films like Grizzly, Alligator went straight for the jugular as cheesy, hammy, fun monster movie. Ever hear about the old myth about the mutant alligators living in the sewers? Well, this basically takes that old wives tale and makes it a reality. The film opens up with a young girl buying a baby alligator as a pet and naming him Ramon, only for her parents to flush it down the toilet due to unwant. Well, some years later Ramon has been feeding on biological waste dumped by the villanous Slade Pharmaceuticals, who is subjecting dogs and cats to biological experiments outside of the purvue of their legal rights. Now Ramon has grown to ENORMOUS size, and thanks to eating humans who come his way, is now in the headlights of the police department when severed limbs show up floating out of the sewers.

Detective Madison (Robert Forster) is bound and determined to find out what is causing the murders, only to find something bigger than he ever expected. With the help of Dr. Kendall (Robin Riker), big game hunter Brock (Henry Silva), and the rest of the police department, Madison is bound and determined to take down the hulking beast before he eats up the entire city.

Alligator is perfectly cheesy and it knows it. Robert Forster plays it all serious, but the writing has the viewer grinning ear from ear with the sheer lunacy of it all. A lot isn’t seen of the giant gator due to the limited special effects of 1980, but what we do see of Ramon is pretty good outside of the typical green screening halos. The quick cuts meant to shadow the gator’s obvious animatronic nature can only get you so far before the crack show, and they do start showing up when Ramon breaks through the concrete to start munching on civilians (in a hilarious scene that has him gulping down humans like he’s a Rancor from The Book of Boba Fett)..

What’s interesting about this Scream Factory release is that we not only get the Blu-ray and 4K UHD of the theatrical film, but Scream has given us the TV cut on a 3rd Blu-ray (it’s only 7 minutes and 15 seconds longer, and like typical TV cuts is mostly just added footage that makes a fairly irrelevant addition to the movie. Still a nifty addition though), as well as their usual bevy of special features. 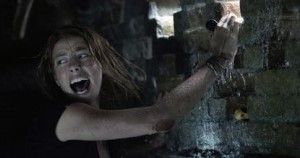 Alligator is brought to us by Scream Factory with a brand new 4K master from the camera negative, and the results are stunning. There’s some obvious flecks (look at the TV screen at the beginning) and the film is HEAVILY grainy, but it’s a very natural looking grain indicative of the late 70s and early 80s. Grain is nice and clean, without clumps or smearing, and the detail levels are superb (sometimes a little TOO superb, as you can clearly see the matte lines around Ramon). The film has an obvious 1970s look with the olive green, tweed suits, and ruddy complexions, and while black levels are good, they do show some heavy grain spikes while down in the sewers.

The audio is a bit weaker, but about what you’d expect from a 2.0 track. Dialog is generally very solid, with some slightly fuzzy higher notes, but overall very nice. Clean vocals, and the ambient action tends to be limited. There’s some definite synthesizer hits that come through nicely and the sound effects impact quite nicely.

Blu-ray TV Cut
• NEW 4K RESTORATION FROM THE OCN WITH ADDITIONAL FOOTAGE FROM AN INTERPOSITIVE
• The extended television version is presented in high-deifnition for the first time ever.

​
I can’t say that I’m surprised that we got Alligator in high definition, but I am surprised that it got the 4K treatment. Luckily the film looks great in 2160p and Scream Factory does a bang up job with the encode. Extras INCREDIBLE, making this a must get for fans of the film as it adds all 3 up together for a fantastic package. Great video, good audio, and perfect extras. A hilariously campy film, it most certainly deserves checking out, and a must buy for fans of the film.