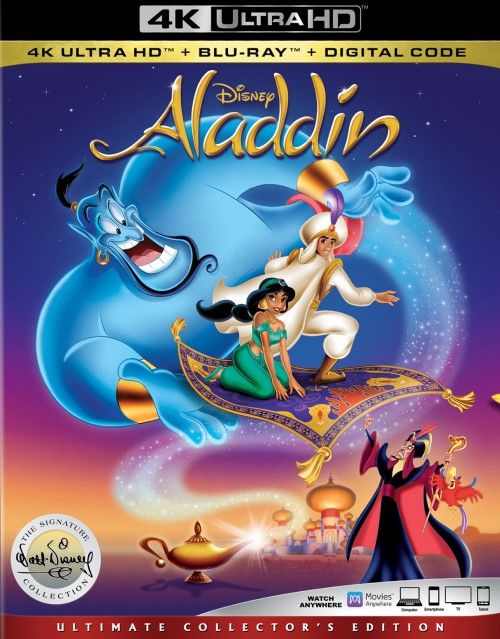 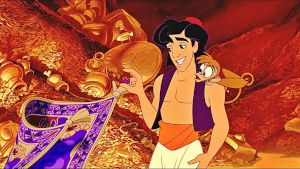 Movie
“10,000 years will give you such a crick in the neck”! After being one of the last Disney classics to make it to Blu-ray, Disney has gone and made it one of their big 4K UHD re-releases that happened this last month (seriously, like a dozen Pixar/Disney movies his 4K UHD with mixed results in terms of upgradability), and most likely to also coincide with the release of the live action film coming out on 4K and Blu-ray the same day. Still, I'm not going to complain the least as Aladdin is one my all time favorite movies and the ability to get this in 4K UHD is a treat that anyone who loves the film would be reticent to pass up. Especially after you read what I'm about to say in the video department.

The land is Agrabah, and Grand Vizier Jafar (Jonathon Freeman) is up to some devilish plan. He’s found the cave of wonders in the desert of Agrabah, and desperately wants access to find a lamp hidden within. The only problem is that only a worthy person may enter, and you guessed it, he’s not worthy. Enter in Aladdin (Scott Weinger), a street rat who’s just trying to survive one day at a time. He’s a liar, a thief, and charmer, but he’s also got a heart of gold. When the Princess Jasmine of Agrabah, steals off into the city to get away from her doofus of a Sultan father (Douglas Seale), the two run into each and sparks immediately fly. Realizing that Aladdin may be his golden ticket, Jafar steals the young boy away and sends him down into the cave of wonders. As fortune may have it, Aladdin finds the lamp and ALMOST makes it out of there in one piece, if it wasn’t for his naughty monkey pal, Abu (Frank Welker), who is too enamored with the riches of the cave to head the warning that NOTHING must be touched inside BUT the lamp.

Trapped inside the cave with nowhere to go, Aladdin accidentally unleashes the Genie within the lamp (Robin Williams), who just so happens to grant him three wishes. Getting out of the cave is now a piece of cake, but head over heels in love with Jasmine, Aladdin uses up his first couple wishes turning himself into a prince so that he can court the young princess. All SHOULD have gone well, but the liar/thief just can’t help himself and continues to keep up the charade with Jasmine about his princeliness. With his head stuck so far into the sand he doesn’t see the threat of Jafar coming until it’s too late. The Grand Vizier steals the lamp before Aladdin can use his 3rd wish and transforms the loveable Genie into monster of unspeakable power, aiding him in his quest to become the despotic ruler that he’s always wanted to be. 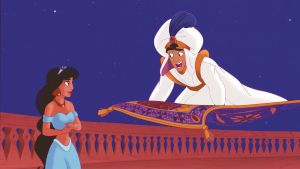 I get chills every time I watch Aladdin. The movie is just so ridiculously fun and you can tell that the cast had a great time watching it. Even in the special features, the directors mention that the film was specifically written with Robin Williams in mind, but they were fearful that they wouldn’t be able to get such a high profile actor for the role. Jasmine and Aladdin make up the main character roster, but Robin Williams is the pull for kids and adults alike. The blatant grandstanding and improve work that he’s famous for shines through in every little scene he’s in, making you giggle hysterically with sheer mirth. Gilbert Gottfried, as Iago the parrot, is a close second. Gilbert’s unique voice and comedic acting style has endeared him to fans over the years and his portrayal as the bumbling but still evil parrot is spot on perfect.

One of the reasons that Aladdin works so well is the lessons of truth and consequences. We certainly have the good old Disney “too easy” clichés where the boy meets the girl and love is instantaneous. Add in a mix of the dumby father (the Sultan) and you have the major two tropes in any Disney movie. HOWEVER, the darker nature of the original Aladdin story lends itself towards some more serious themes. Specifically here we have an issue where Aladdin has lied to so many people for so long, that he really can’t seem to give it up. Even if he wants people to accept him for who he is, he has lied to himself for so long that he can’t see hope if it bit him on the foot. I will say this. Aladdin may not be as POLISHED as Beauty and the Beast, but its songs are infectious, and the overall “Arabian Nights” theme has always been a huge allure. Still my favorite Disney movie. 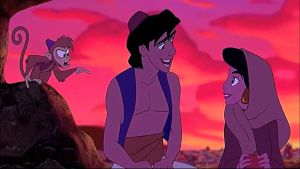 Here's probably the wildest difference from the Blu-ray to the 4K in terms of setting itself apart, the video. The Diamond Edition of the 2015 had the matted version of the film in 1.85:1, however this new transfer went back to the original CAP elements and has given us the film in the original 1.60:1 (not 1.66:1 like the box says) aspect ratio that it was originally animated in (the 1.85:1 release had the bottom and the top matted to 1.85:1 from the 1.60:1 original). Not to mention that it looks completely different than the old Blu-ray (the Blu-ray on the 4K set is given the same .1.60:1 remaster that the 4K UHD has, and is different than the 2015 Diamond Edition). The colors are really lush and vibrant with the addition of HDR, with things like the golden scarab, or the wild colors of Agrabah looking jaw dropping in comparison. Also the detail levels are off the charts. The animation had a few line art errors that haven't been cleaned up (a good thing as they used DNR in the 2015 release to aid with correcting those mistakes) and the lower resolution portions are left intact. The film isn't overly bright, but it isn't heavily dimmed either. Instead it feels more neutral and not as overly warm as the previous edition. .The REALLY great news is that the DNR (digital noise reduction) and aliasing and mild edge enhancement found on the Blu-ray release is completely gone. To put it succinctly, this is a fantastic transfer that is taken from the raw CAPS elements and is probably the most faithful replication of the source that I've seen to date. It fixes the issues of the previous release, adds in good use of HDR and carries the original aspect ratio as well. Perfect. 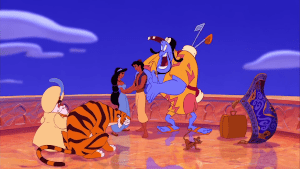 Disney has once again given the obligatory Atmos upgrade over the 7.1 DTS-HD MA track found on the Blu-ray, and in this case it's a strange mixture of give and take with the new mix over the old. Comparing both side by side I have to say that the Atmos track is not massively neutered (at least in most ways) vs. the DTS-HD MA tracks like so many others. In fact, in many ways it's a big upgrade over the 7.1 mix. The dialog is crystal clear and actually locked up front in the center channel instead of bleeding into the mains unnaturally (which was a problem in the old Blu-ray's 7.1 track) . Also the surrounds are wildly active and pushed really hot, and not just because the dialog is recorded lower. If you listen the main channels and dialog are perfectly balanced, but the surrounds get pushed a bit warmer than I was expecting, which makes for a wildly immersive sound stage. The overheads get some decent usage with things like debris falling from above, or the sound of the magic carpet wooshing by overhead, but this is not a mix where the Atmos overheads are constantly pushing discrete sounds at you. Now onto the things that I feel are a slight step backwards. Like most Disney Atmos tracks, this needs a good 6 DB push on the receiver to get it to reference levels and even then the LFE is not as chest cracking as the Blu-ray's 7.1 track is. Now, that's not saying that it's whimpering LFE experience. Quite the opposite in fact, as there is plenty of low end activity to enjoy, from the rumbling of the cave of wonders to Jafar's magical energy, to the slamming sound of the palace doors. It's just that when comparing directly to the Blu-ray you can feel the mid bass difference as the 7.1 track definitely has that weight and power behind it. HOWEVER, it's pretty obvious that it's not just a level issue. The LFE is mixed differently for the Atmos tracks because there are other portions of the movie where the Atmos track's LFE output CLEARLY surpasses the Blu-ray even! Listen to when the stairs go down in the chapter 2 cave of wonders scene. They slam down with nearly double the power of the Blu-ray, while elements of that same scene (such as Jafar's voice) carry more rumble to them. Again, this is a fantastic track with great musical clarity and wicked surround usage....it's just different than the 7.1 mix, but every bit as good in many ways, much better in other ways (vocals staying locked in that center channel for example) and oddly inferior in the bass department, sounding much more similar to the old DVD 5.1 mix or the theatrical mix than Disney's souped up Diamond Edition track. 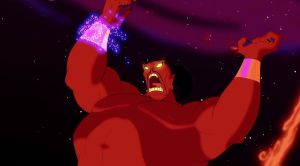 It's been only 4 years since the 2015 Diamond Edition Blu-ray, but I'm ecstatic to see Aladdin on 4K UHD so soon. This new edition is fantastic with amazing video and great audio, but a slight change up in extras (as is the case when going from edition to edition with Disney). There's about 45 minutes of brand new extras (all extras are housed on the included Blu-ray) but a lot of the classic legacy extras that were on the Diamond edition are missing. This is going to be one of those odd recommendations where I FULLY recommend picking up this as a good upgrade in video and a change in audio, while I still recommend holding onto the 2015 Diamond edition release as well. This new edition has the 1.60:1 aspect ratio, while the Diamond has the theatrical matte'd 1.85:1 edition, and the extras on that set are well worth keeping. I know it may seem weird, but this is 100% an upgrade in most ways, but one of those rare times when having the Diamond Edition as a companion feature is still recommended as well. A must own.